It’s here! It didn’t fall into the Atlantic and amazingly everything was just the way we packed it when it left the United States. Our container arrived today!

As our friend Rachael said, “Getting your container is like Christmas, only better because you already know you like the stuff.” She’s right. It was like Christmas and it’s really fun to see all that stuff you painstakingly loaded into the container 48 days ago. What’s hard to believe is just how far our stuff had to travel from Long Beach down through the Panama Canal and up to the German port. Then it was trucked over to Czech where just this morning we signed the customs documents and they brought our container to our new apartment.

We were overwhelmed by the support of the local church here and our friends and teammates from Josiah Venture. I’m especially grateful to Mel Ellenwood who helped us translate for an hour and a half at the customs office and even Connie Patty who took the photos you will see below. So without further delay, here’s the story in photos (captions below each photo). 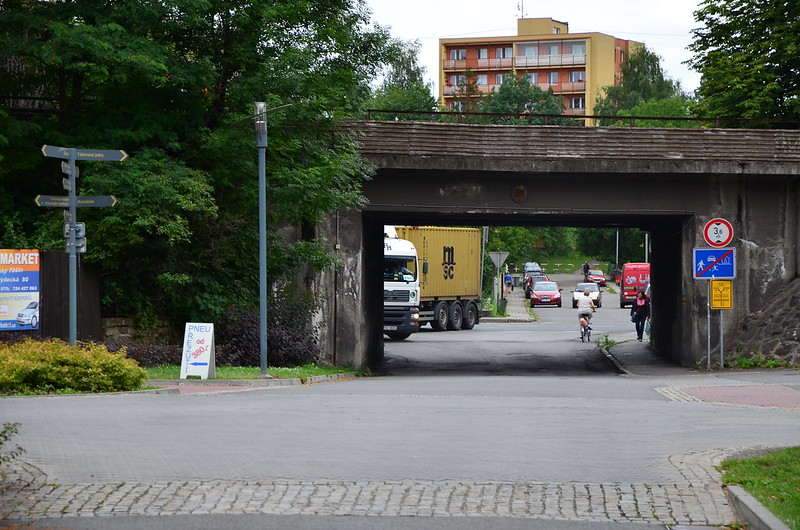 Connie actually caught this picture of the container about 20 minutes before it arrived. This is just down the road from our place. He couldn’t fit under the little train bridge so ended up having to drive the container around some tiny streets just to get it to our place. 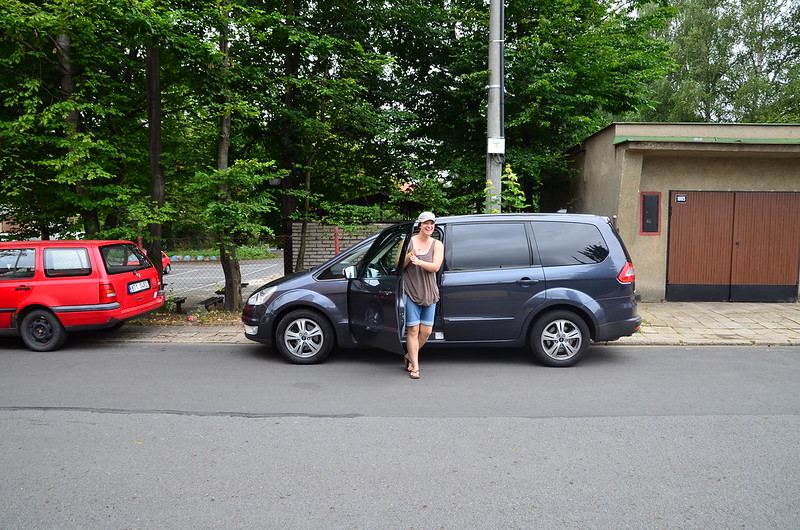 Bethany was taking care of making sure we had food and refreshments so she was only actually there for the truck’s arrival and departure. There was a sale on boxed milk at the grocery store and the lines were crazy. Bethany said people had multiple carts full of this special milk and so she missed the unloading. Welcome to Czech, I guess! 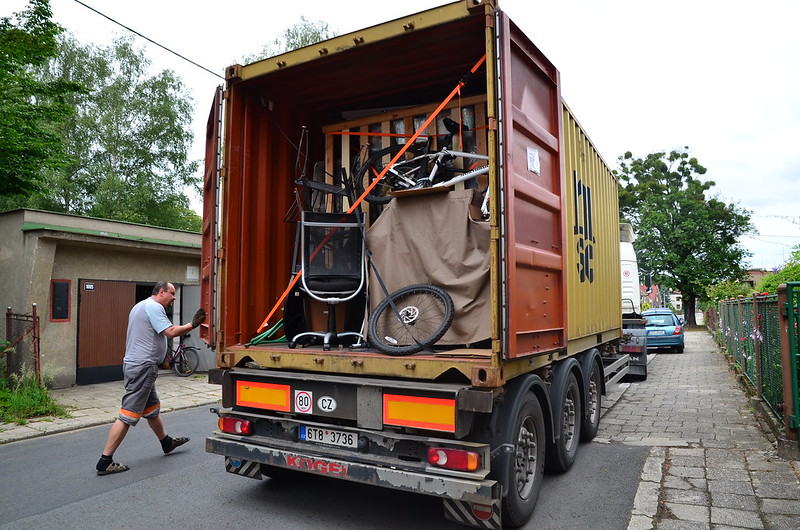 Here’s what the container looked like right when it was opened. It’s almost identical to what it looked like almost 50 days and thousands of miles before so I was already amazed. 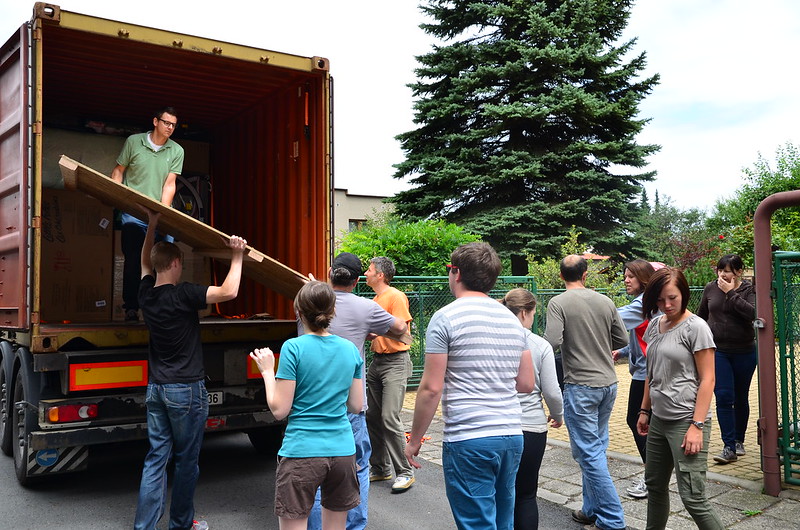 Our container had 3 sections which we separated by walls that our friend Justin built when we loaded it. The first section went pretty quick because it wasn’t packed as tightly. This photo is all of us unloading the first wall. 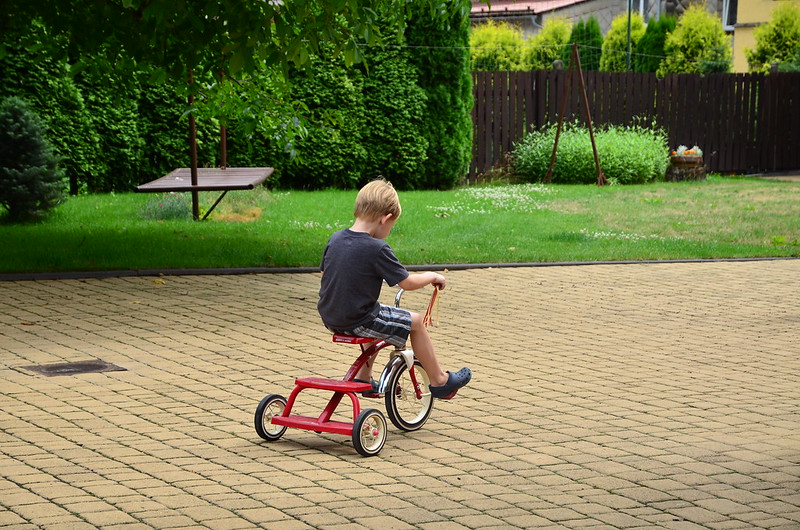 Titus’ tricycle was in the first section and he was so excited to ride it around our little driveway. 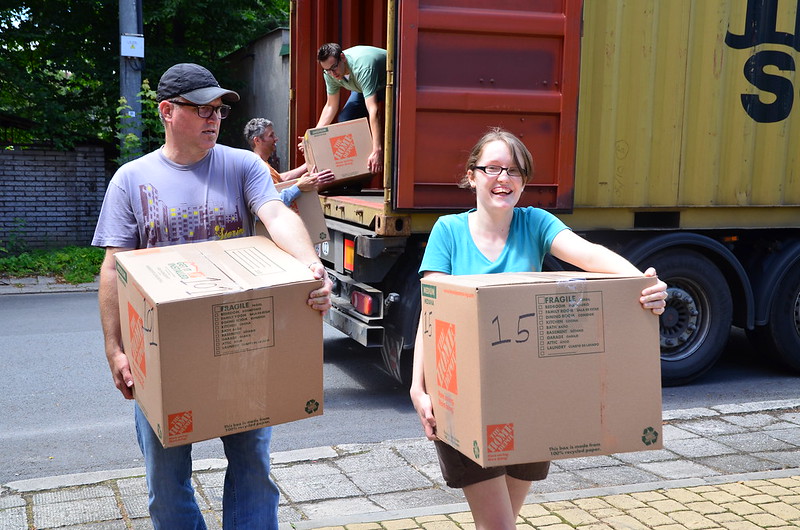 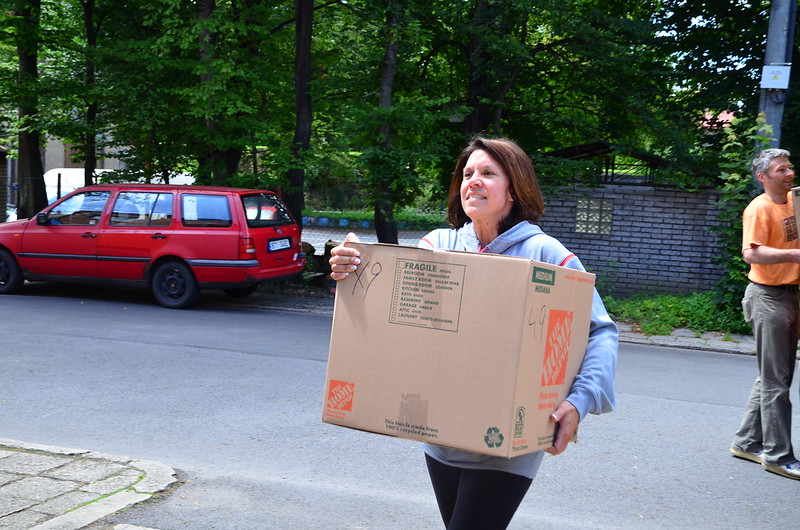 This is Amy muscling a box to the apartment. Everything was color coordinated which hopefully made it easier for people to know where stuff went! 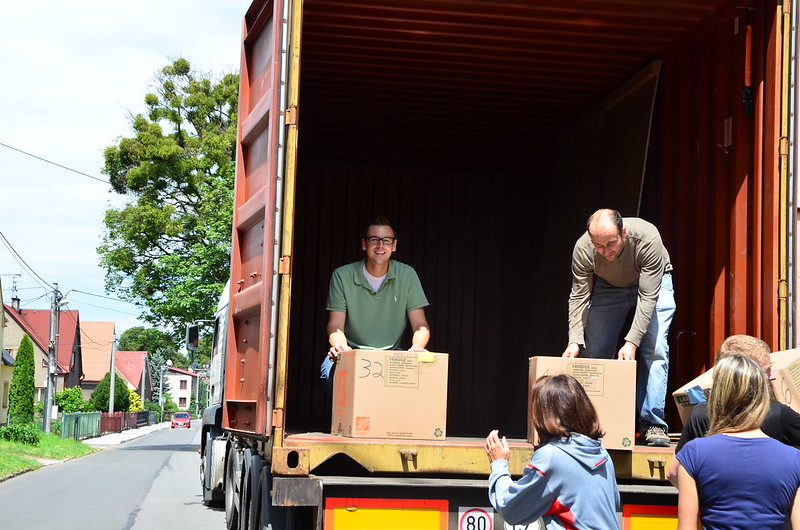 The whole unloading took about an hour, and I was on the truck the entire time. It was incredibly fast and we couldn’t have done it without all the help. This photo is of me helping unload the final box. 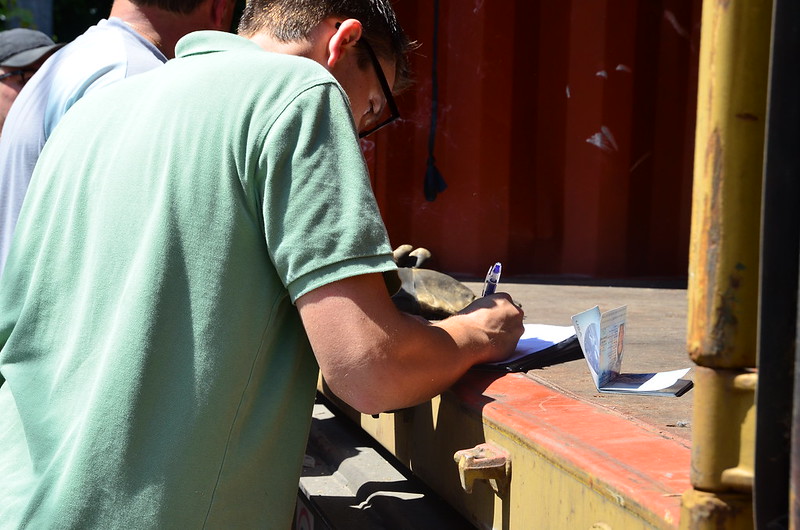 Here’s me signing over the final container paperwork. 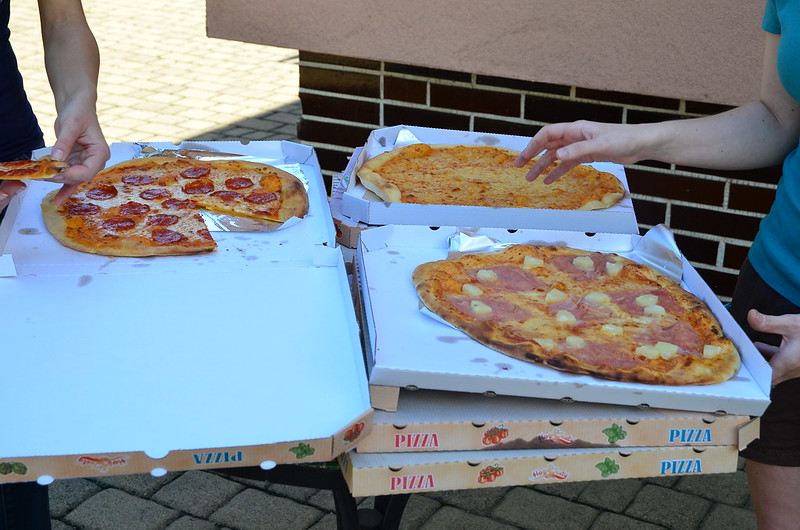 Pizza for everyone! The local pizza shop couldn’t believe we were ordering 10 pizzas. 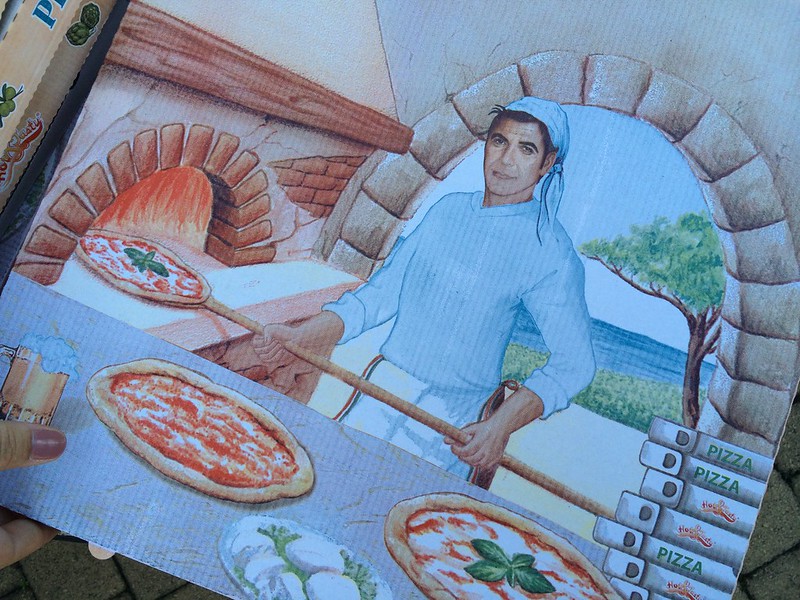 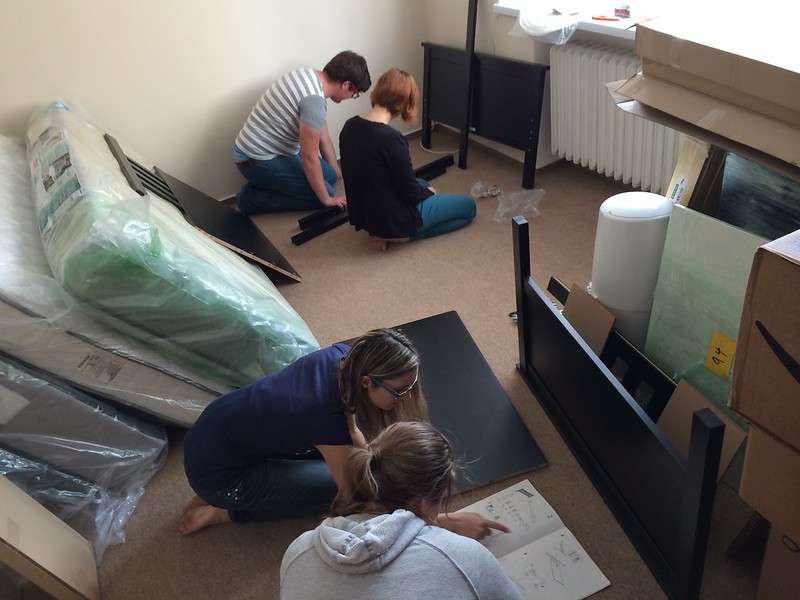 Back in the apartment we had people building the kids new IKEA beds. Such a blessing. 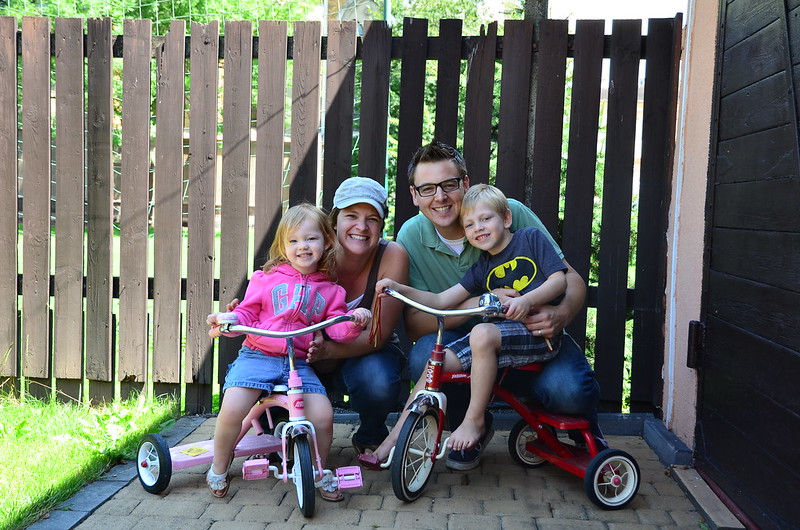 And finally a little shot of all of us after we were done unloading.

What a great day! The only thing we don’t have photos of is inside our new place and that’s mainly because we didn’t really spend a ton of time unpacking today. The kids were tired and so were we so we made it a shorter day and we’ll head back tomorrow for some serious unpacking of boxes.

Finally, this evening we had the joy of having Zach and Kara Zegan over for dessert. They only live about 20 minutes away and we haven’t had time to really catch up with them yet. It was really fun have them and their little dog Hobbes over and just catch up and say hi. It’s really special to serve the Lord alongside your friends. They have been serving at camp all last week and will leave tomorrow for another 11 days of camp. This week is a special week for Josiah Venture as the 1000th camp begins on Saturday. You can see this short video below which gives a piece of the story. Even while we have big, life changing days in our lives with the arrival of our container, God is doing things in the lives of young people in this part of the world. What a joy to serve the King. To Him be the glory!

Our 1000th Camp from Josiah Venture on Vimeo.