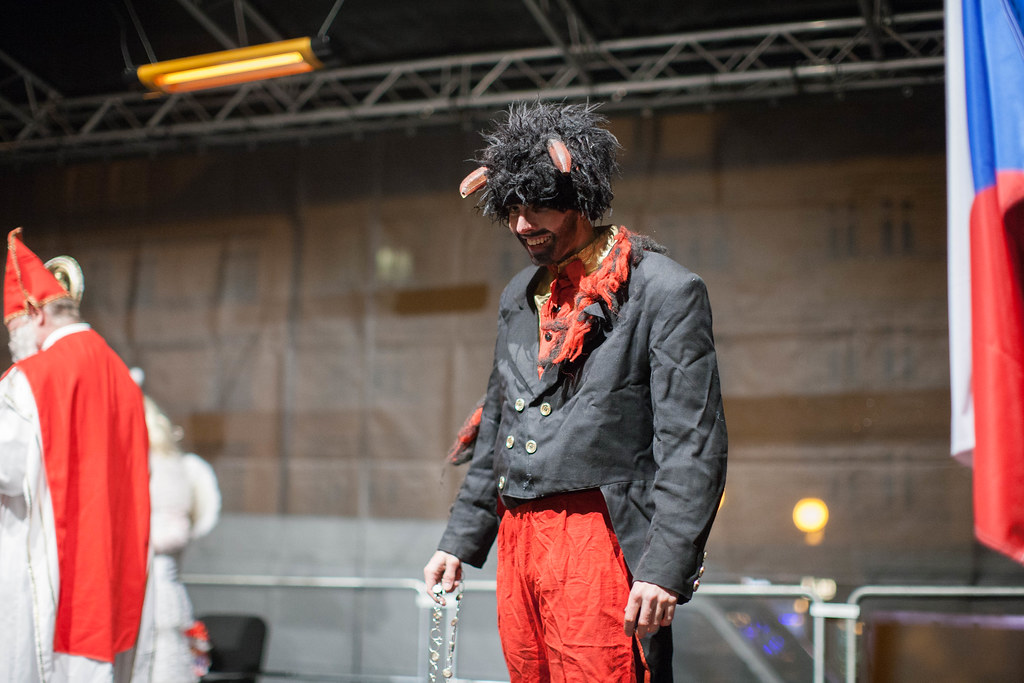 “Parenting requires a lot of discernment…and wisdom.” That was what Bethany said over breakfast this morning. No doubt, she’s absolutely right.

We were discussing whether or not to take Titus to school today. He’s not sick or anything, it’s just today in Czech they are celebrating Saint Nicholas Day (Mikuláš). The best description I have found of the holiday is on a Czech tourism site that describes it this way,

The charming tradition of St. Nicholas falls on the eve of St. Nicholas Day, December 5th. If you find yourself walking the streets on that evening, you may run into a group of strange characters: St. Nicholas (Mikuláš), the Angel (anděl) who represents the Good, and the Devil (čert) representing the Evil. All wear costumes. Mikuláš looks a bit like Santa Claus whose origin was supposedly inspired by St. Nicholas. All three characters walk the streets, stopping children and asking them if they were good in the past year. Most kids say yes and sing a song or recite a short poem. They are then rewarded with sweets, candy or other treats, which are handed out by the Angel. Bad kids would be put in the Devil’s sack and taken to hell, or would only get a sack of potatoes or coal instead of candy – of course it does not really happen!

Bethany tried speaking with other missionary families and just get their insight to the holiday, especially in regards to letting Titus go to school where they were going to have Mikuláš, the angel, and devil in class today. It’s not easy, to be quite honest. We’re trying to think about your Christian witness. We’re trying to think through Titus’ emotions and age. We’re trying to think through the cultural aspect and things we need to adjust to versus things we need to refrain from. I don’t know if there’s a specific right or wrong answer, but mostly it’s just discernment and what’s best for our family, for Titus, and what we believe honors Christ the most.

In the end we decided not to send Titus to school today. We both felt like Titus’ age was a big factor and he’s already scared of other things. This would be like through him into the fire of fear and that didn’t seem best for him right now. However, we did make it out to a festival this evening in our town which was a helpful intro to our first St. Mikuláš holiday in Czech. I took some photos of the goings-on, so here’s a little taste of what we saw (captions below each). 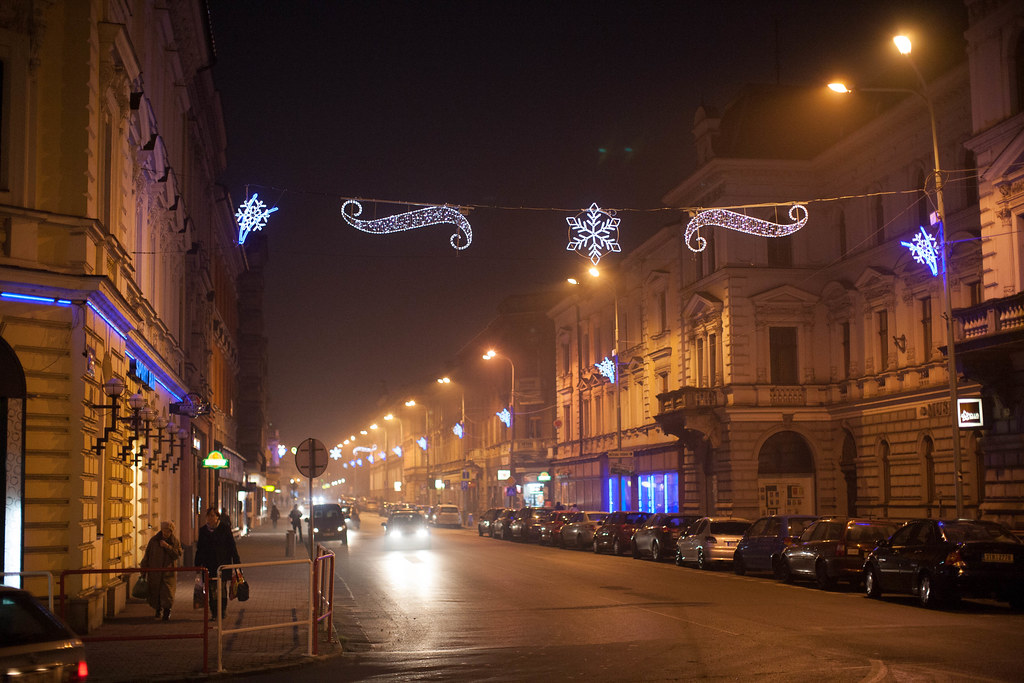 We walked to the town square where the festival is and we have to cross the road that goes into Poland. They have new lights up across the street and on the lamp posts. It looks great. Basically, as you look down that street you can see Poland.

They had a huge stage and an even bigger Christmas tree setup in the town square. On stage you can see Mikuláš, the devil, and the angel giving out treats to kids. They were calling kids up on the stage, but I don’t know how you get your kid on the list? 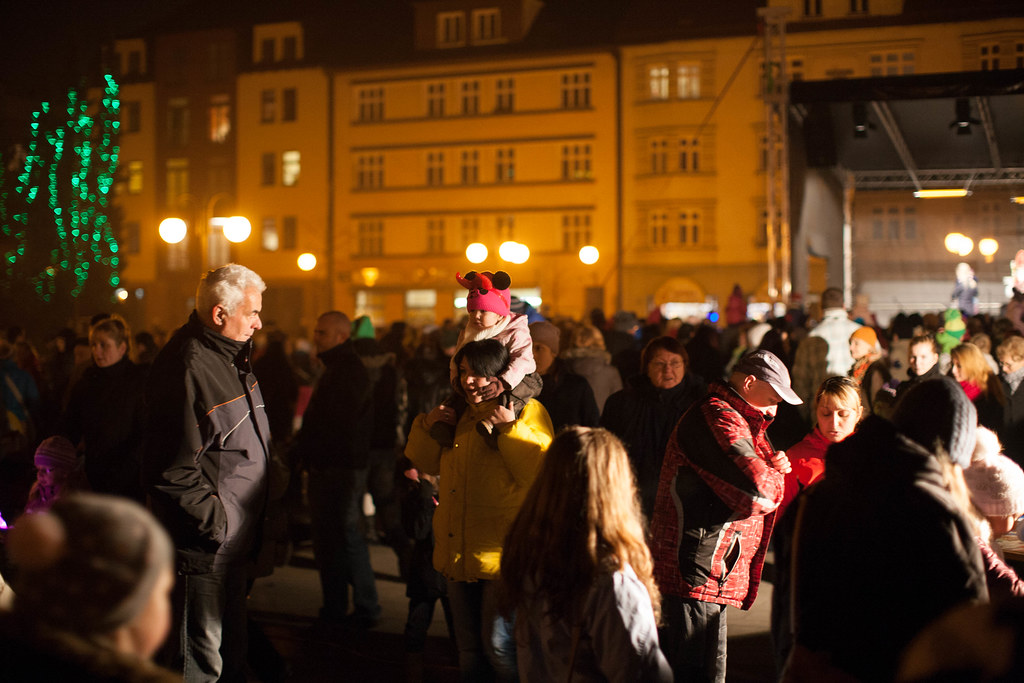 There were a lot of people out tonight. It was just above freezing outside and they had coal fires burning around the square. The smell was not pleasant and the air quality was worse. 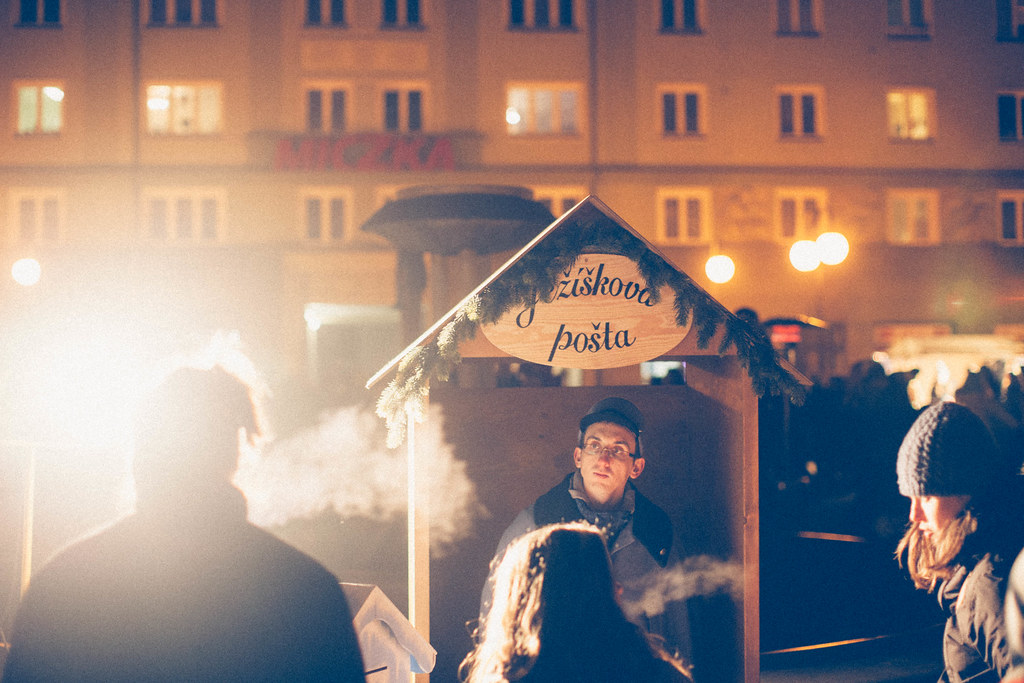 Above is a photo of what I’ll translate as the “Jesus Post Office.” Traditionally, in Czech culture, Jesus brings the presents on Christmas even and St. Mikuláš brings presents December 5. At the place above you could write letters to the baby Jesus in the same way you would write letters to Santa Clause in the States. I wonder where they mail them? 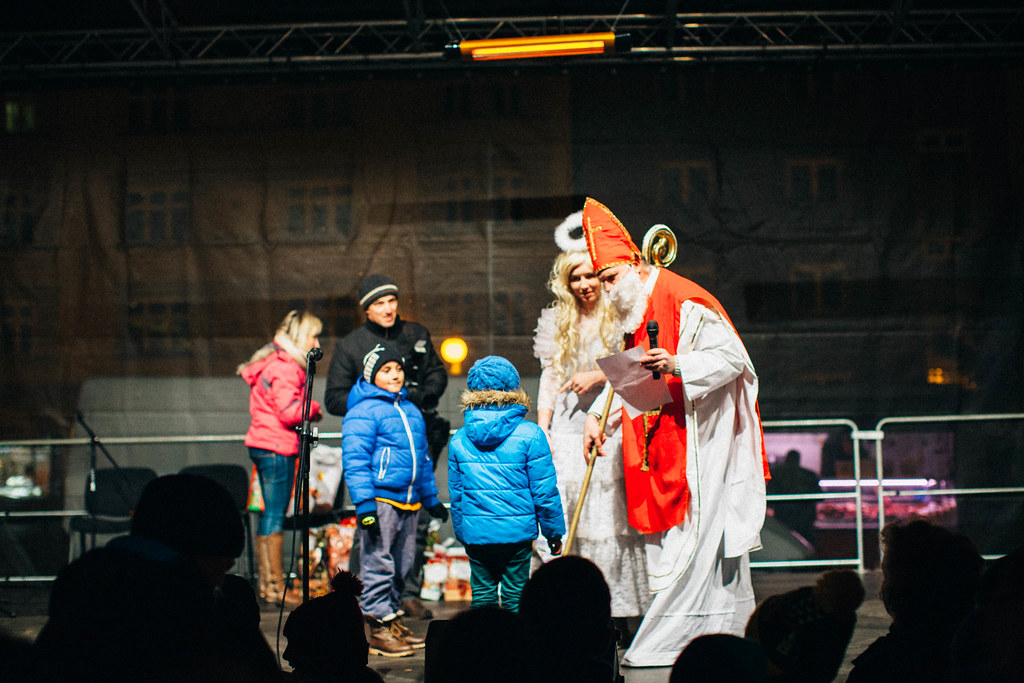 I got closer to the stage to get photos of Mikuláš and what was going on. Here you see him and the angel talking to some kids. The devil was off to the side taunting kids (not pictured). 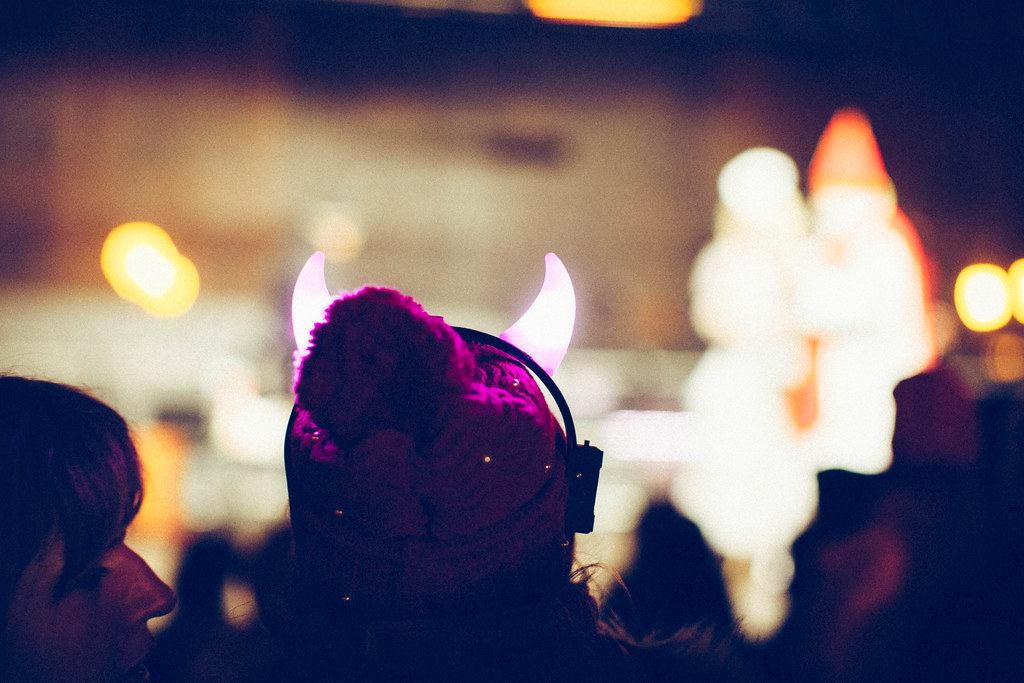 Almost like Main St. at Disneyland kids had glowing hats, swords, and even light up devil horns. They were being sold in the town square. I got this photo of one such kid on their parents shoulders as they watched the stage. 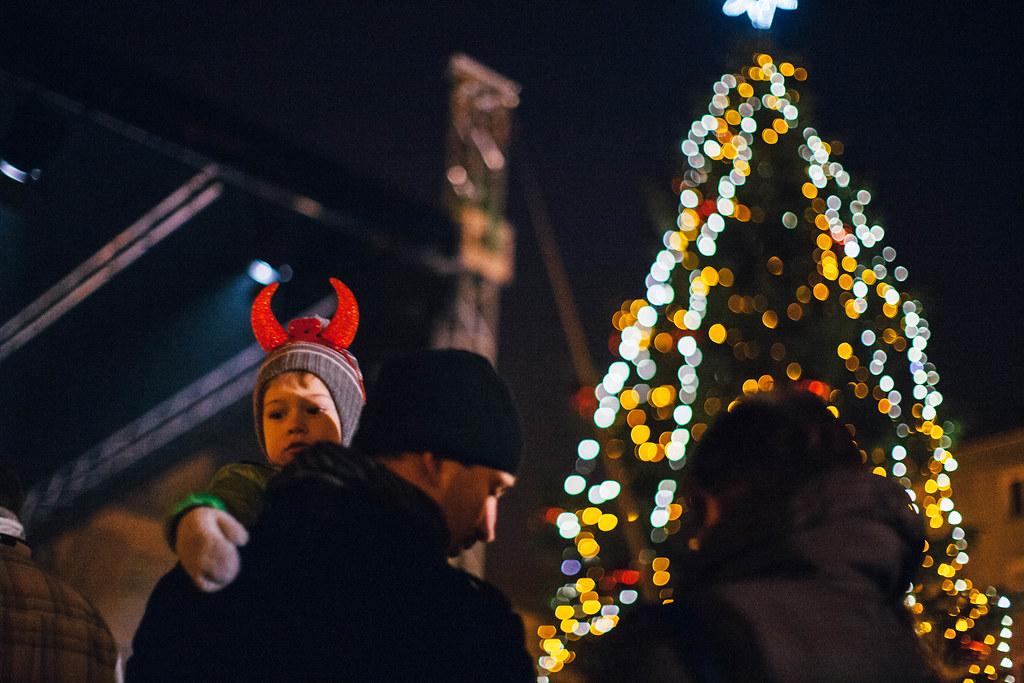 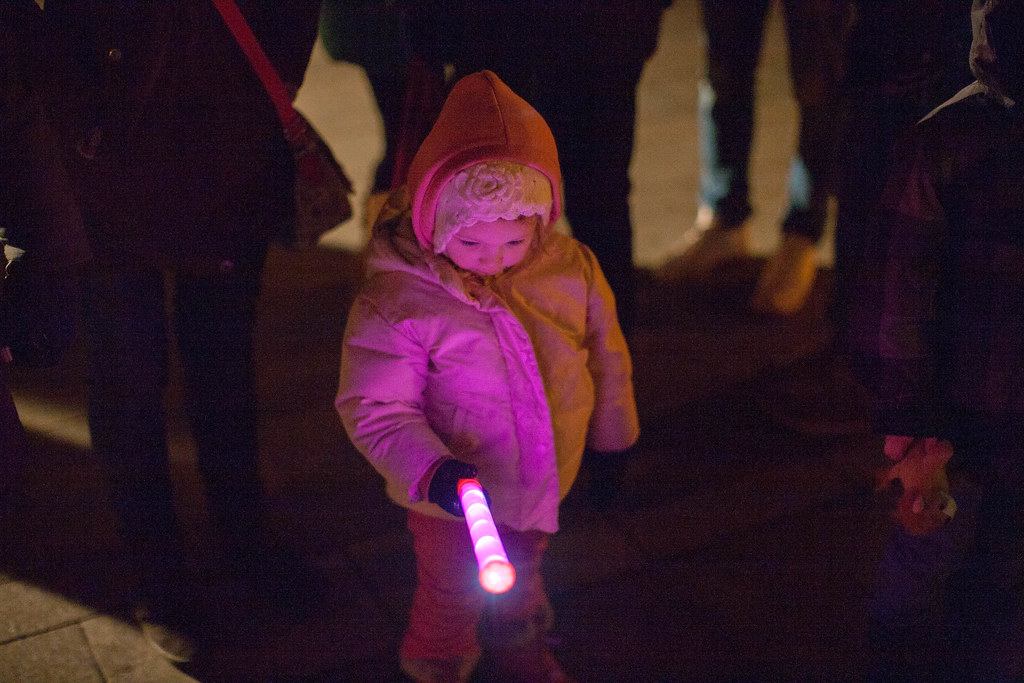 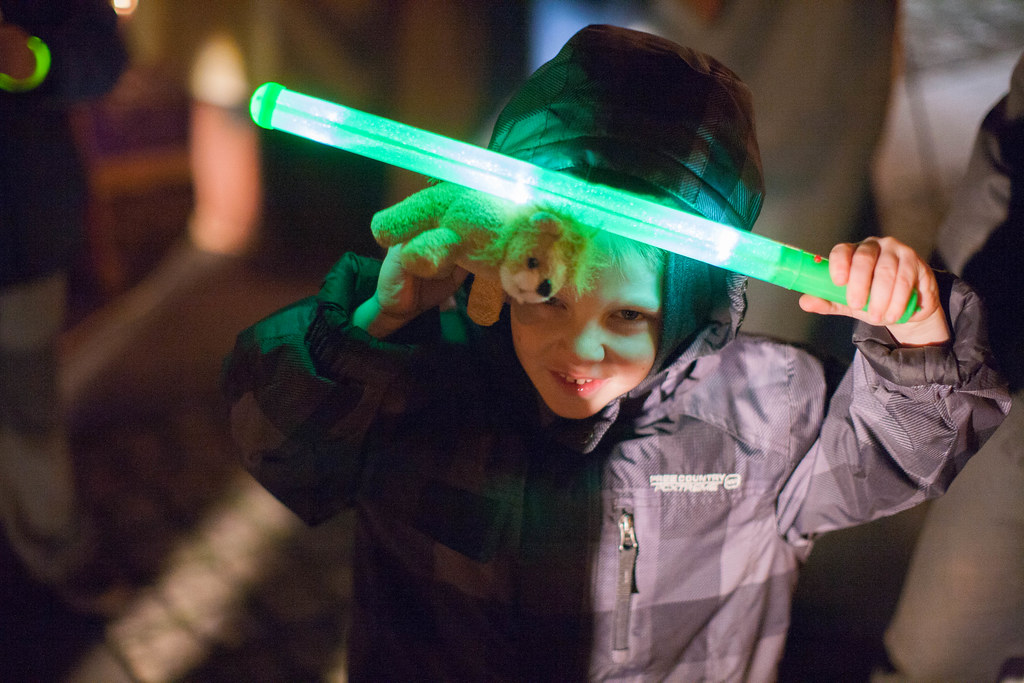 We actually got in on the light up toy fun, but only because I thought they looked like light sabers. Here’s Avery and Titus checking out their little light saber things I got for them. They were literally $2 and our kids thought they were great. 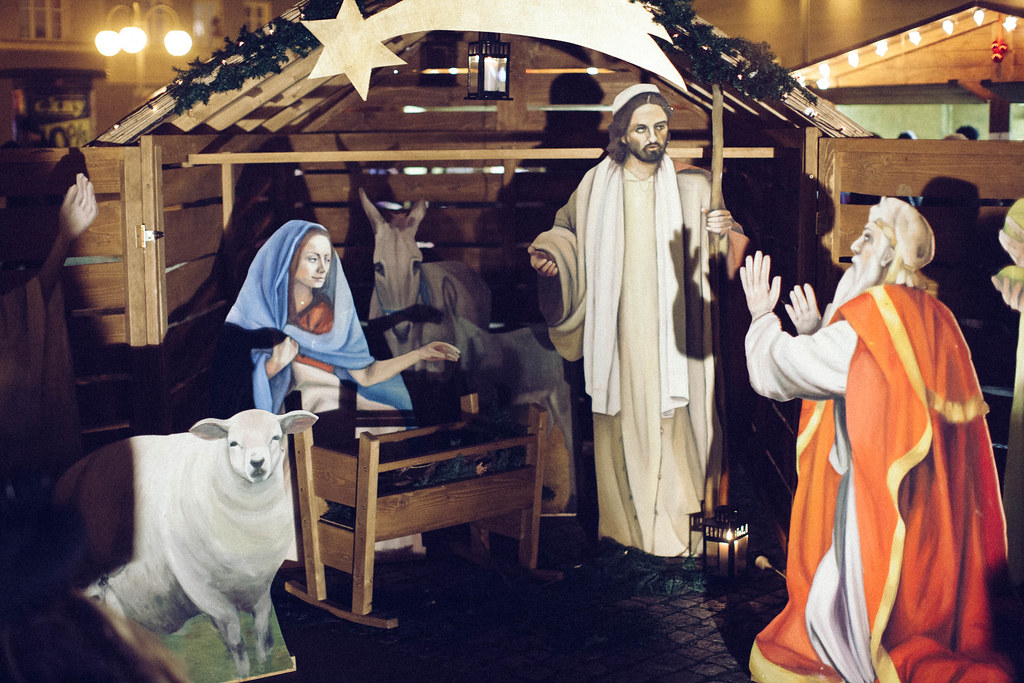 Interestingly enough, they did have a pretty large nativity scene to the right of the stage. Our Czech friend Jenny (who is actually a full fledge American citizen now) pointed out that no one is offended her by the origins of Christmas. Even though it’s so atheistic here, they still know the origin but many just believe it to be a fairytale. 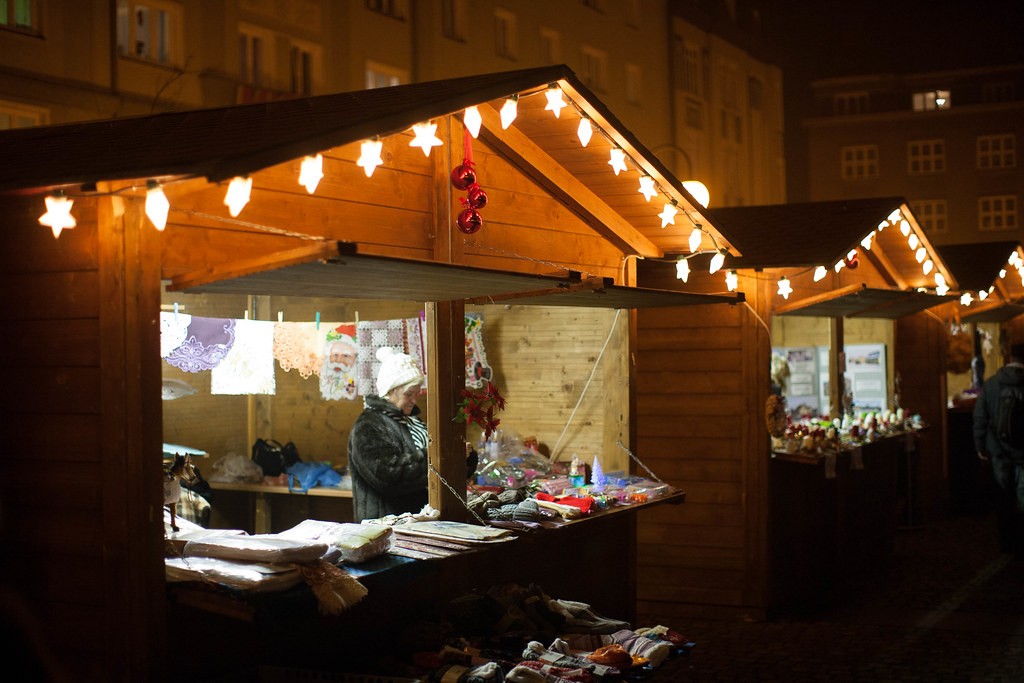 Around the outside of the square were vendors selling all kinds of things. Many had trinkets and decorations, especially Christmas decorations. We didn’t buy anything, but it’s always fun to see handmade stuff in another country. 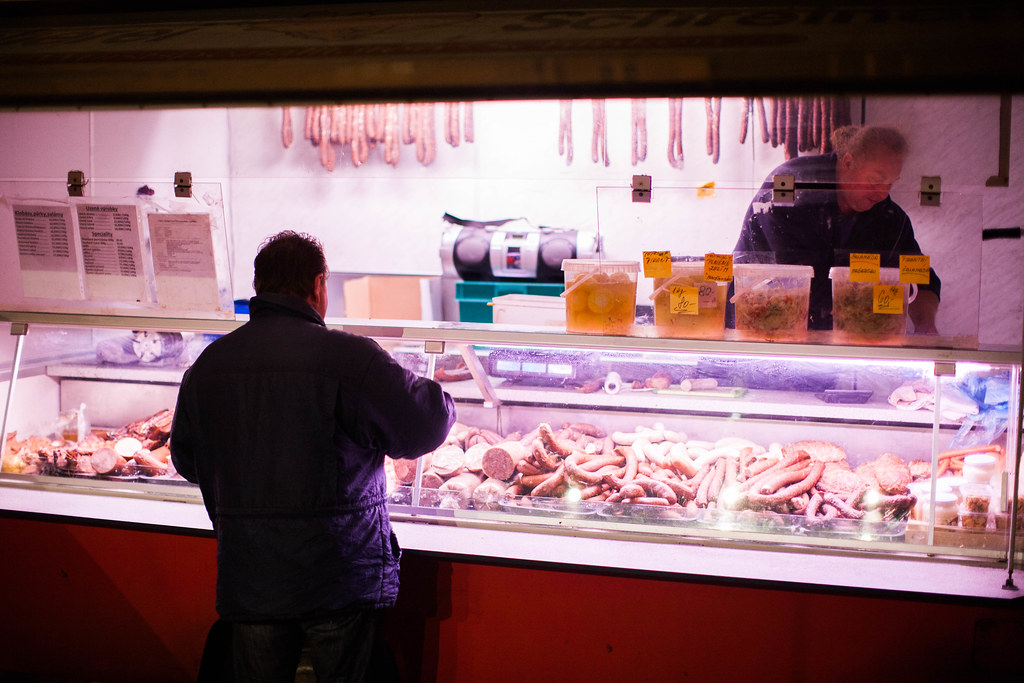 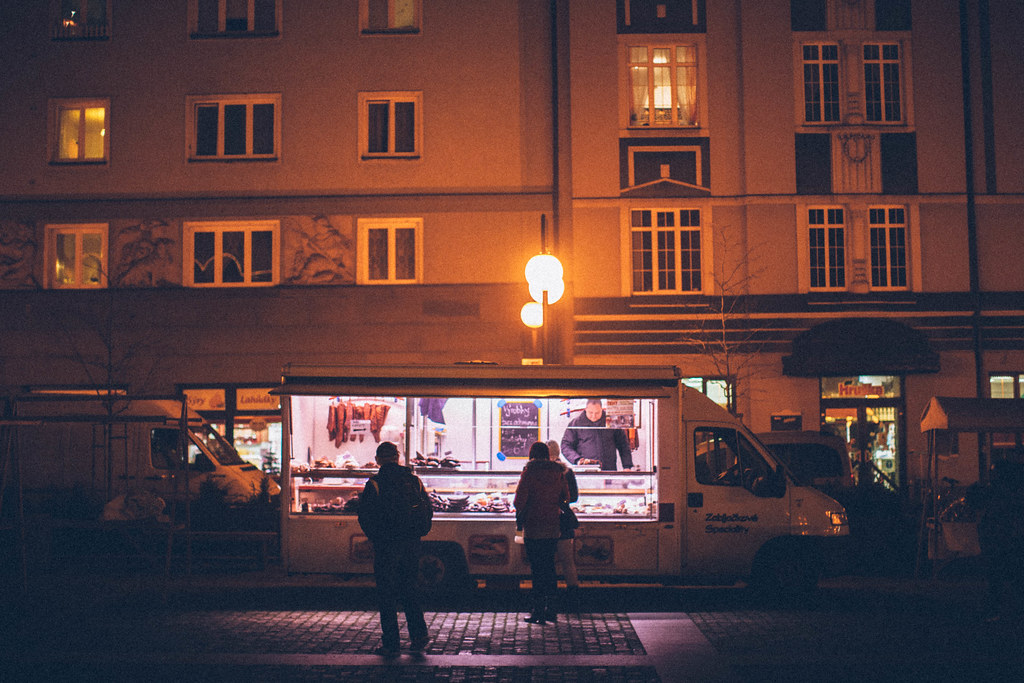 Other shops included the two you see above which were selling various meats. Both vendors had their own vans which open up to sell from and it’s not uncommon to see these guys parked outside of the grocery store.

Afterwards we had a pizza dinner near the town square with our friend Rachael who had accompanied us during the evening. It was a very interesting thing to see and experience. I’m not sure what I think just yet, but it’s good to continue to be a student of the culture here and get more inside the minds of how Czechs think and what they value. As I prayed for our meal tonight, I prayed for the country of Czech. I was reminded by the things we saw tonight that this place needs Jesus. Pray with us that we would continue to learn the language, the culture, and the people and be a witness for Christ!