Happy Polish Mother’s Day, I guess? I’m still trying to figure out if that’s what we were celebrating at church today and I have a feeling I’m at least close on that guess. Poland celebrates Mother’s Day not on Sunday, but on May 26th every year. We were tipped off by another missionary that our city (which is literally on the border of Poland) would be celebrating the holiday this weekend. The town square had lots of things set up and today at church there were all kinds of special things going on. 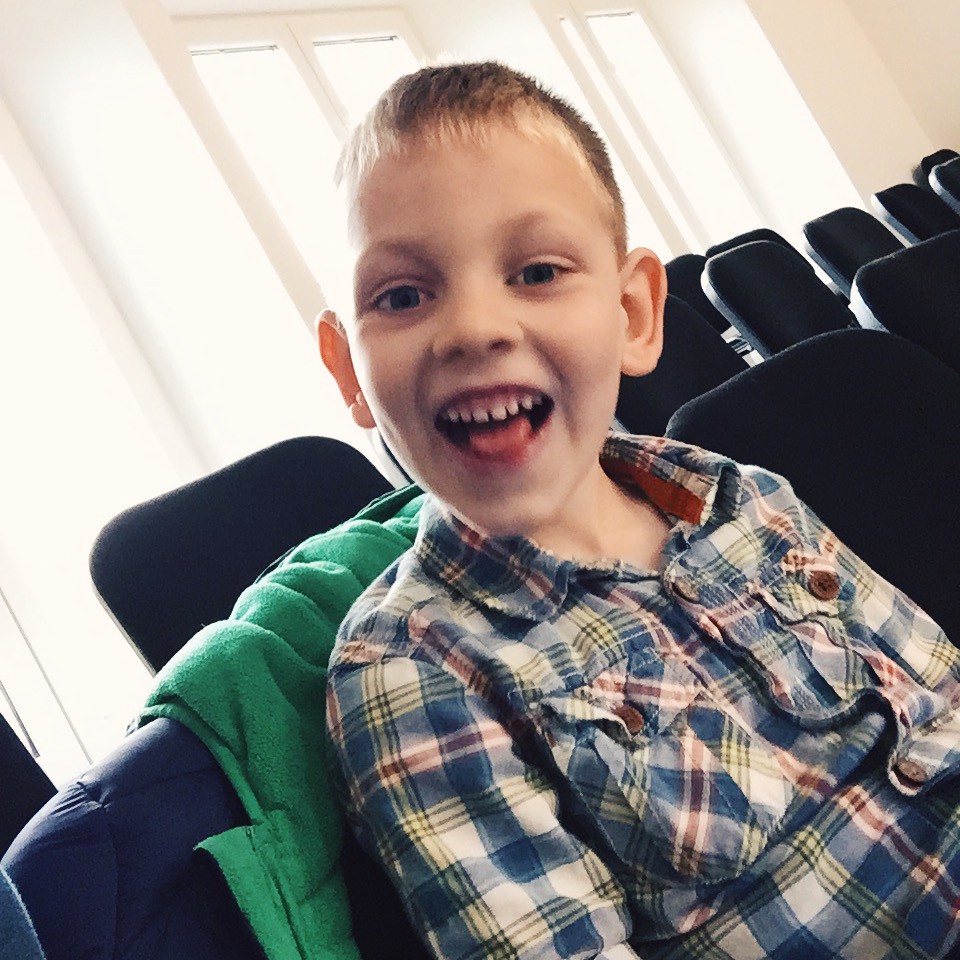 Titus and I were the only ones that went to church today because Bethany just isn’t feeling well and I didn’t want to have to try to wrangle both Titus and Avery (thus Avery stayed home too). When we got there things were already in motion and the kids were lined up in the hallway to go on stage. I didn’t know this was going on, but they tried to hand Titus some flowers and usher him on stage too but I just ended up taking him upstairs since we didn’t really know what was going on. By the time we got up there, the kids were in place on stage and music had begun so I got my camera out and started getting video (shown below). We also took the above photo to send to Papa and Nana because while we were at church they sent us a text message updating us on their trip progress. They had just landed in Amsterdam and had one more leg of their trip to Prague. You can see just how excited Titus was!

As fun as Polish Mother’s Day is, it pales in comparison to Papa and Nana coming to town! We spent the afternoon getting the house ready but the kids were asking all day, “Is it time to go get Papa and Nana!?” Their train wasn’t schedule to arrive until about 8pm tonight, and it was running just a few minutes late. But we ended up coming over to the train station and finding a spot on the platform where Bethany could sit and we could wait for them. I wasn’t positive which platform they would be coming in on, and I really wanted us all there to receive them when they got off the train. Incredibly, the spot we chose couldn’t have been more perfect. We sat and waited and just happened to be sitting right where their train door opened! Here’s a video I got of them pulling in which was really fun.

Papa and Nana had a pretty good trip from Seattle, but they did have one little hiccup in their trip when Papa fainted on the airplane. He said he felt like he needed to walk around a bit and headed towards the bathroom on the plane when he fainted and he told us when he came to “there was a Dutch doctor and a Norwegian nurse working on me.” He got a few scrapes on his face from the fall, but overall he’s doing alright. They made all their connections, all their bags arrived, and they made it on to the train towards our house all by themselves. Not bad for their first time flying to Czech! They also came bearing many gifts for us, including lots of our Christmas gifts that left in the States when we visited them this past Christmas. The kids of course were going crazy about everything and it was like Christmas in May in our living room as the suitcases were opened. There’s so much I could say her, but it’s getting late and everyone needs to get some rest. Here’s a few more photos from our time tonight and we’re excited about three weeks with Papa and Nana in town for the birth of baby #3! 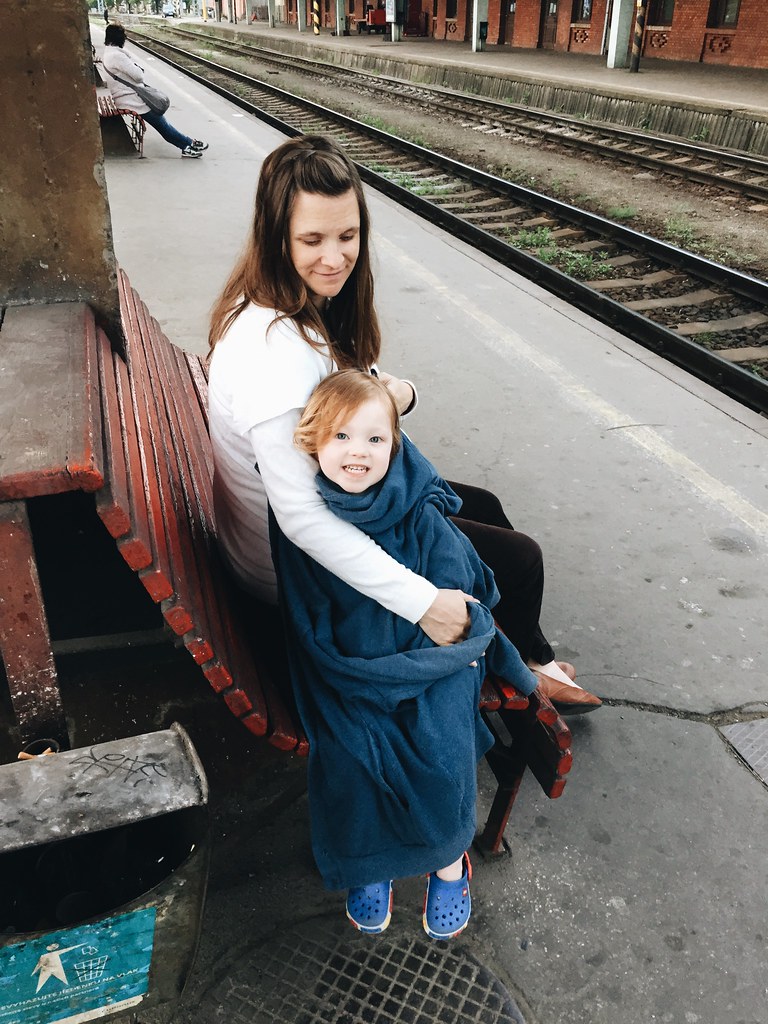 We forgot to grab Avery her jacket before we left for the train station, so I gave her my sweater and she was all bundled up as we waited for Papa and Nana. 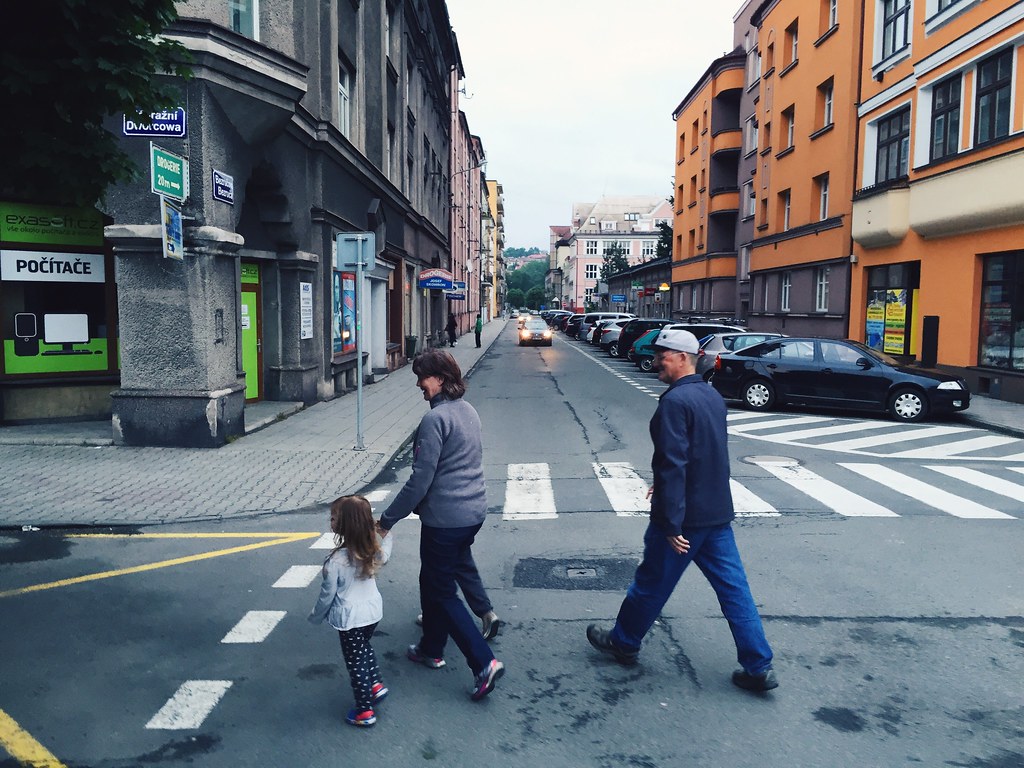 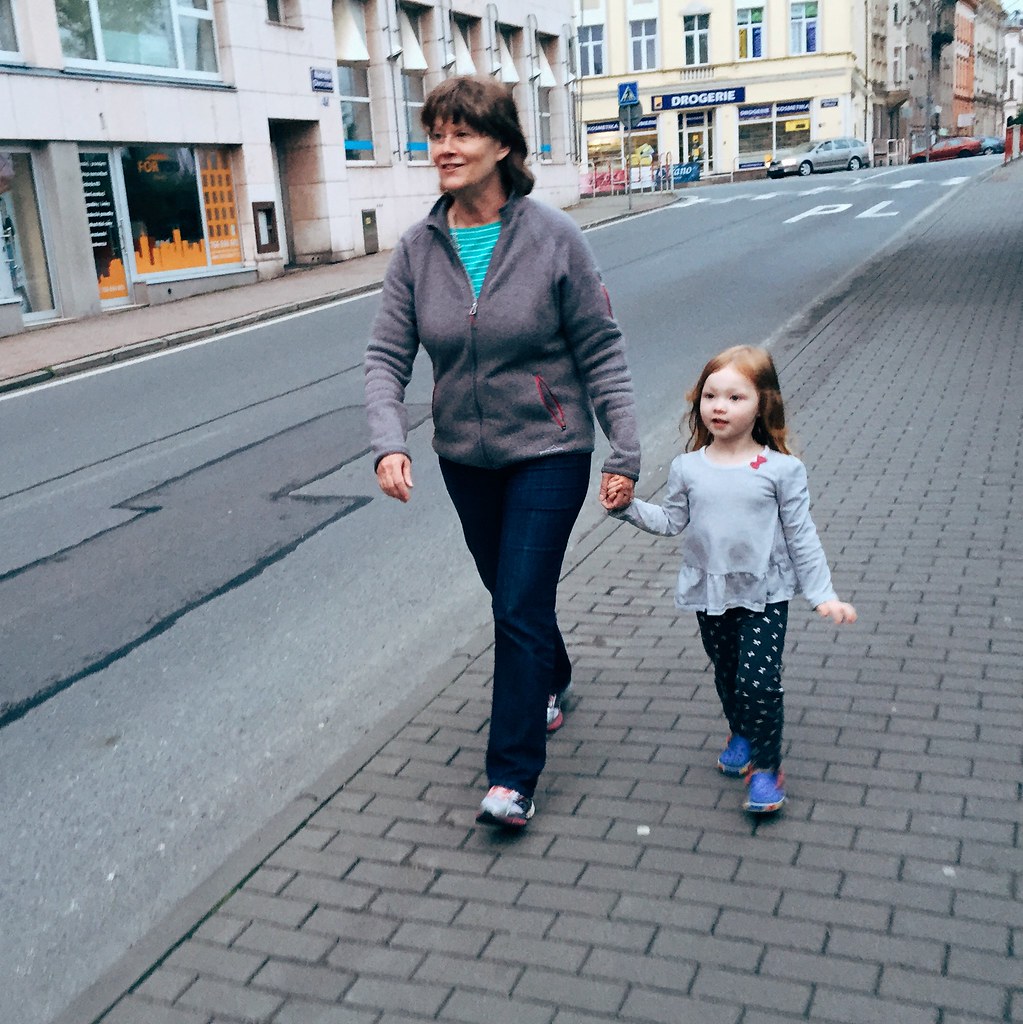 We decided to just walk home from the train station. I brought the car to bring the bags, so Bethany drove the stuff home while we all walked. It was just all part of the experience of coming to Czech. Avery held hands with Nana and just kept telling her about everything. It was a lot of fun. 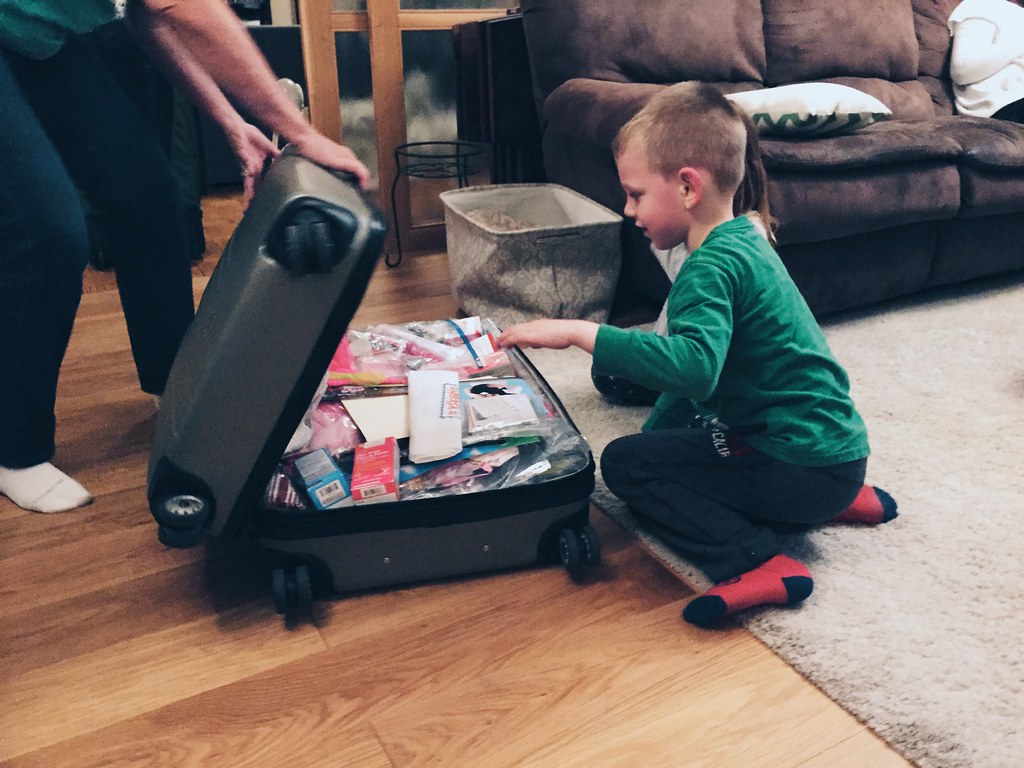 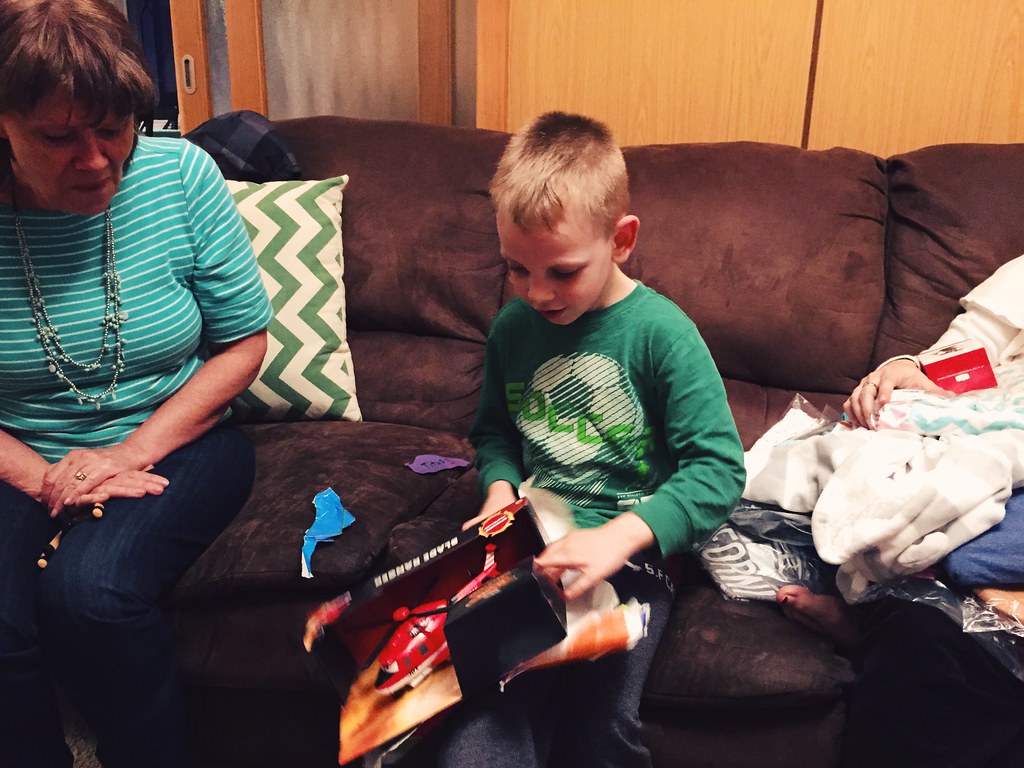 Above you can see Titus and Avery opening the suitcase which held all the goodies. In the second photo Titus got to open a belated birthday gift from his uncle and aunt which Papa and Nana delivered. This was just part of the fun and there was so much excitement in this house for every little thing that we opened. It was a lot of fun and I was really happy to be reunited with some of my books that I got for Christmas as well other things that were brought over. Not bad for day one with Papa and Nana! 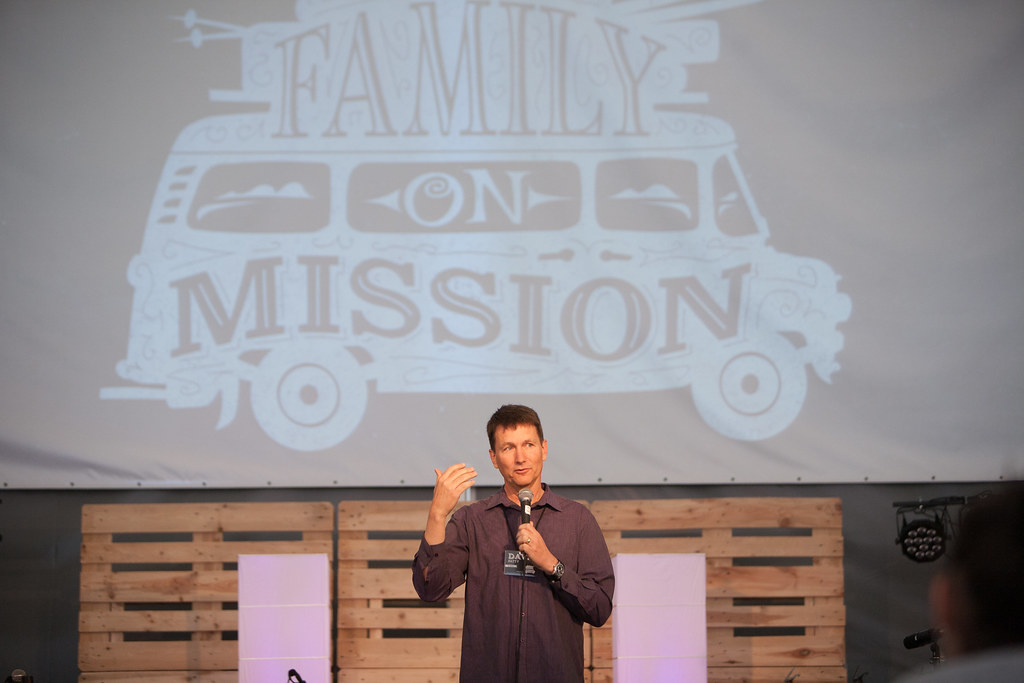 I’m back writing again from my desk at home as today was the last day of Spring Conference. Above is a photo I got today of Dave Patty teaching the last session on family traditions and I thought it was a fun and helpful session. At one point he passed the mic around to people to hear their different traditions and it was great to hear all the different things that families do in their homes and when they go on vacation. This is an area that Bethany and I feel we could do better in. For instance, family vacation has been harder to think through as everything is still so new and we don’t always know where to go or what it’ll look like. No matter what we want to try something this summer and just see what might work for us here in Europe.

Conference ended with a big performance from all the JV school-aged kids that they had been preparing all week. Our kids are still too young to be involved with it, but they had fun watching it (actually, Avery wasn’t feeling amazing and fell asleep in Bethany’s arms, but Titus sat down in the front of the room and watched). It was full of singing, dancing, and even some skits that the kids did a wonderful job at. Even with just a few days of preparation these young kids had memorized lines, hand motions, and even dances and I was really impressed with how well they did! Apparently this is something that happens every year among the missionary kids and I’m sure it’s something they also look forward to. Well done, kids! 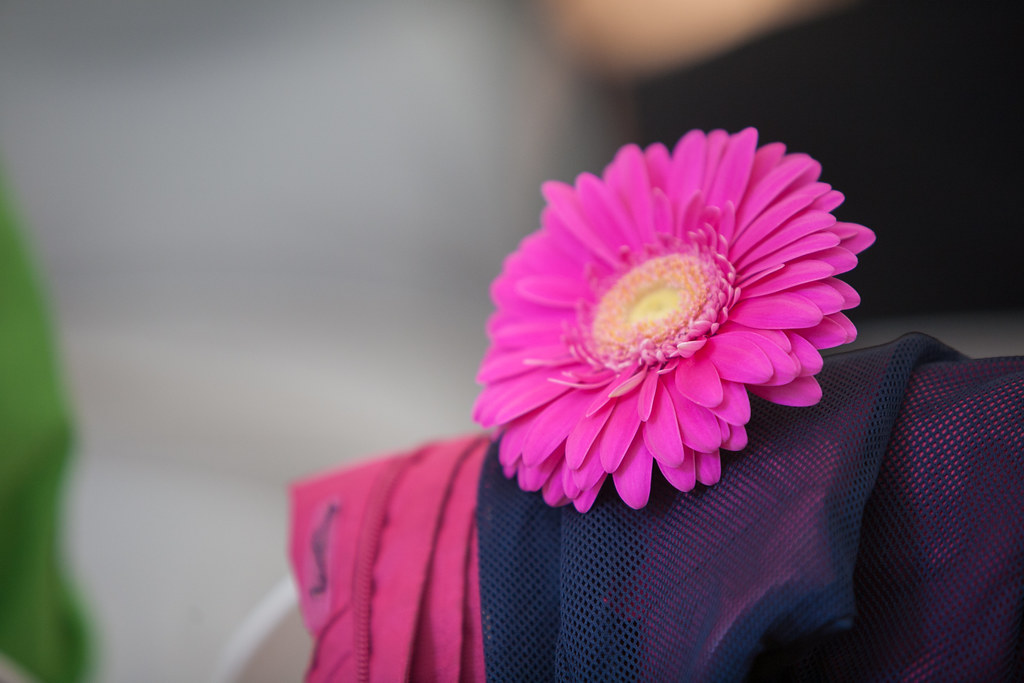 Above is a photo I took of one of the photos that the men gave to all the ladies today at the Spring Conference in honor of moms on Mother’s Day. I have written already about how amazing Bethany has been this week with all the full days we’ve had and my limited time, and that’s just worth repeating. She has been amazing considering she’s only a few weeks away from having our third child and how involved I was with conference this year. I’m sad to say I didn’t have anything for her by way of a gift today not because I didn’t think about a week ago, but I just didn’t make the time to plan for it. It’s something I am not proud of today, especially considering just how much she has helped me and our family this week. Even this morning Avery threw up during breakfast so Bethany stayed with her, thus missing the last session of conference. Wife, I love you and you’re an incredible mom to our kids. Thank you for caring for us this week and always, and for how you are an example of Christ. I am reminded of Mark 10:45, “For even the Son of Man came not to be served but to serve, and to give his life as a ransom for many.” You are so like Christ in that you give your life for this family and for me. Thank you! I love you and happy Mother’s Day!