It’s almost poetic that my dad would die on the day of the winter solstice, or sometimes called “the longest night of the year.” Only he and I would likely find it so. Because for years he has called me, almost without fail, to remind me that the days are either getting longer or shorter. I’ve come to expect the calls from him telling me that “from now on the sun will stay up a little longer every day” or “well, now the days are getting shorter.” He always like the longer days. I’m gonna miss those phone calls.

December 21–that is the date in which the winter solstice usually lands–will now be for me not only the day when I can cast my longest shadow of the year because of the sun’s low height in the sky, but a day that casts a longer shadow in my mind because it’s the day my dad died.

I shared at his funeral a few weeks ago that I had thought about that day often. For some reason, especially over the last few years, I’ve thought a lot about my dad’s death. Part of the reason, I suppose, is that I’ve been trying to prepare myself for it. But anyone who’s lost a loved one knows that’s pretty tough to do. Yet I still tried. Sometimes I found myself just sitting at my desk imagining myself speaking in front of my family with eloquent words, sharing how much my dad impacted me, and why I thought he and I had a special relationship–even different than his many other children. And while I did get to speak at his funeral, it wasn’t what I imagined. Is it ever?

My dad used to call me his shadow. He commuted to Los Angeles every day when I was a kid and often this meant long hours of which I didn’t get to see him. That’s why he would sometimes take me to work with him, just so we could spend time together. Those were some of my favorite days growing up. I loved the Big City. I loved the hustle and bustle, the traffic on the freeways (I usually slept through it), and watching the sun rise as we came into the San Fernando Valley. Almost always people at my dad’s “buildings” as we called them (he was a maintenance engineer on the skyscrapers)–almost always they would ask, “Is this your son?” Without hesitation he would say yes, and add something like, “He’s my little shadow today.”

Shadow him I did. For years I tried to be like him in so many ways, even going so far as asking for a pager (yes, that little thing people used to wear on the belts before cell phones) for my 9th birthday. Somehow I got one. You should’ve seen how proud I was with my lime green see through pager case just like dad’s red one. I would page him and he would page me and man it was the best. We even had a code system: it was 54. It meant, “Car 54 where are you?” Dad said it was from an old show, but I didn’t care. It just meant that I could page dad and ask him where he was. When would he be home from L.A.? Is he coming to my game tonight? Car 54, where are you!?

A farmer friend of mine says the best thing a farmer can do is cast his shadow. All he means is that he’s gotta be on his fields checking things, or looking for problems, and making sure it’s going well. Simply put: he’s gotta show up. My dad always showed up. Often he was late, but he got there as much as he could. I have one distinct memory of pitching from the mound in a Little League game and seeing him walk up probably around the 3rd of 4th inning. Something in me just wanted to throw a little hard and little straighter after he arrived. Then when the inning ended he usually he would slide something through the fence for me–a Gatorade or some seeds from the snack bar. Sometimes he would give me a little scouting report on the next hitters, and always he would encourage me. If it wasn’t at the baseball diamond it was at the soccer field (and even at the bowling alley for a time!). He always cast his shadow. I wish he still could. How am I casting mine?

The Bible compares our lives to shadows. A number of verses talk about life as a shadow, but here’s a few:

For who knows what is good for man while he lives the few days of his vain life, which he passes like a shadow? For who can tell man what will be after him under the sun?

We get the point: our lives are just passing shadows because they pass by so quickly. They are as the Psalmist says, “like a breath.” On January 28 my dad would’ve been 79 years old. But even then, Psalm 90:10 says

The years of our life are seventy,
or even by reason of strength eighty;
yet their span is but toil and trouble;
they are soon gone, and we fly away.

Soon gone. That’s exactly it. Even if we get seventy or eighty years, they are still go by so fast. We know this to be our experience because we often hear people speak like this: “You blink and your kids are graduating college.” “You blink and…[fill in the blank].” Soon gone…like a breath…like a passing shadow. While the Biblical authors didn’t have advanced film technology, it’s as if they understood that life is like a time-lapse video where the shadows pass from one end to the other of the screen. A friend of mine one said he hates time-lapse videos because they remind him of the brevity of life. I think he was on to something.

All I’m really trying to say is that I’m gonna miss my dad. I called him often in recent years to ask how to fix my car, how to install a light in the house, which aisle at Home Depot has the star bit for my drill that I need, or even FaceTimed him just to talk while only seeing the top of his head since he never seemed to know how to hold the phone. He was always so helpful. I see now I was just still tying to be his shadow all these years later, or maybe resting in his shadow? There was a definite ease and comfort in knowing I could call him any time and hear him ask,”What can I help you with now?” I’ll miss those calls too.

I don’t like his skin, it’s broken and rough
I’ve tried looking away, but it’s just not enough

His eyes so big, one on top of the other
And a large open mouth, “Is this a monster?” I wonder

There he stands, so tall and so straight
I know that he’ll eat me right off a plate!

Surely Dad knows of this mystery monster tree?
I know I’ve tried to tell him, not once, not twice, but three!

“A scary monster!” I yell, while pointing towards the beast
But Dad says, “Son, I see nothing” and stares off toward the east

How can I convince him of what I know to be true
This monster tree will eat me like Mother’s beef stew!

With a scream and a gasp, again I will try
To show my Dad, “There’s a mouth and that’s an eye!”

Looking again, my Dad caught it’s gaze
He was staring right at him, with both eyebrows raised

Walking towards the creature, Dad began to smile
“I see him, Son,” no longer in denial 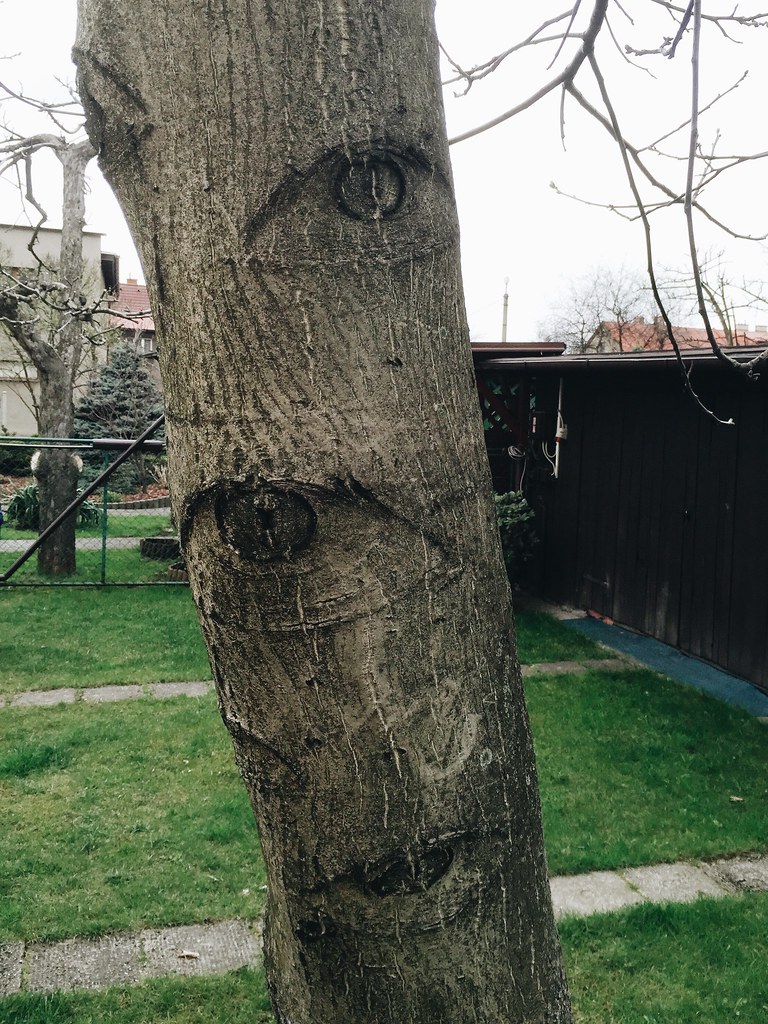