Editor’s note: As much as I have enjoyed writing about baby Karis this past week, I must take today’s post to break away and talk about something different. For regular blog readers this will be a departure from my usual tone and focus, but I felt I needed to write about what I did today=. This will not be graphic, just simply getting my thoughts down on paper so to speak. I will return tomorrow to our regular scheduled programming.

Today I visited Auschwitz-Birkenau, the largest Nazi concentration camp (1940-1945). Even though it’s only a one hour drive from our house here in Czech, I don’t think I’ll be going there very often–maybe even once is enough. It was something that my father-in-law and I had been talking about doing, but since it would just be he and I we weren’t sure if we would have the time. An opportunity presented itself this afternoon and we decided to go and take a standard 3.5 hour walking tour. It’s a sobering place, but looking back on today I am very glad we were able to go. 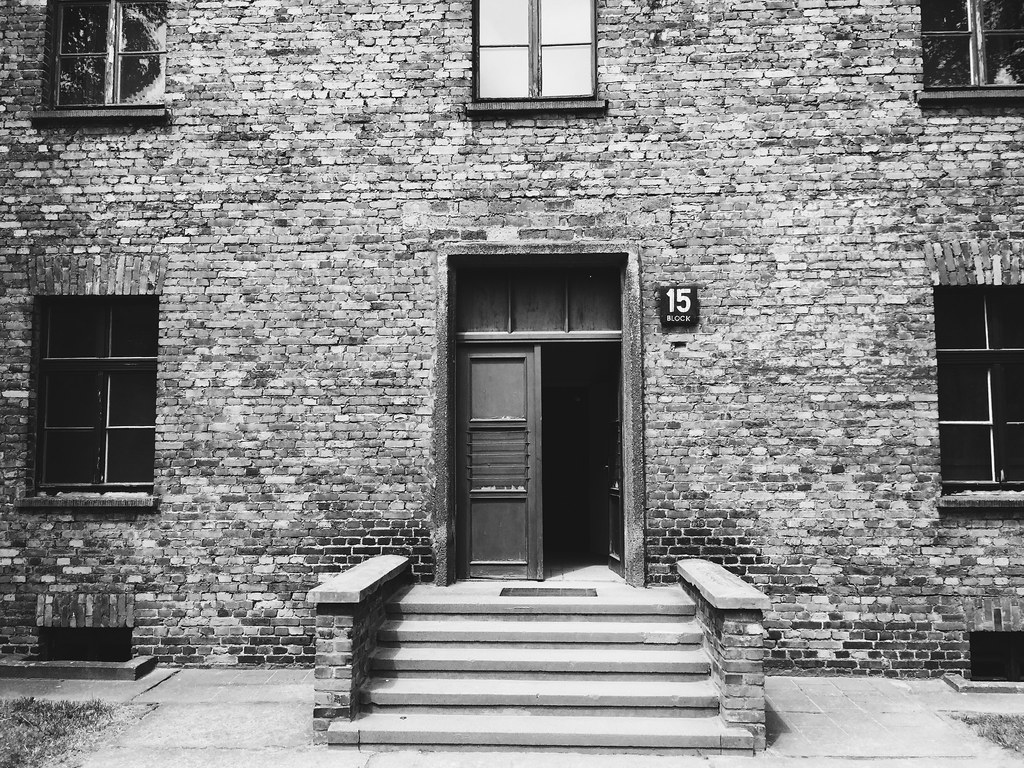 In his travel book, American travel-guide, Rick Steves, answers the question “Why visit Auschwitz?” He writes,

Why visit a notorious concentration camp on your vacation? Auschwitz-Birkenau is one of the most moving sights in Europe, and certainly the most important of all the Holocaust memorials. Seeing the camp can be difficult: Many visitors are overwhelmed by a combination of sadness and anger over the tragedy, as well as inspiration at the remarkable stories of survival. Auschwitz survivors and victims’ families want tourists to come here and experience the scale and the monstrosity of the place. In their minds, a steady flow of visitors will ensure that the Holocaust is always remembered— so nothing like it will ever happen again. Auschwitz isn’t for everyone. But I’ve never met anyone who toured Auschwitz and regretted it. For many, it’s a profoundly life-altering experience— and at the very least, it will forever affect the way you think about the Holocaust.

After visiting the sight today I can only agree with his assessment. To walk the grounds, visit the buildings, and hear the detailed history is humbling, overwhelming, and saddening. It’s only as a Christian who knows that the Lord is sovereign over history that I could really make sense of it. Within the first few minutes I found myself pondering Ecclessiastes 7:2, “It is better to go to the house of mourning than to go to the house of feasting, for this is the end of all mankind, and the living will lay it to heart.” Auschwitz is a house of mourning and today I laid it to heart. 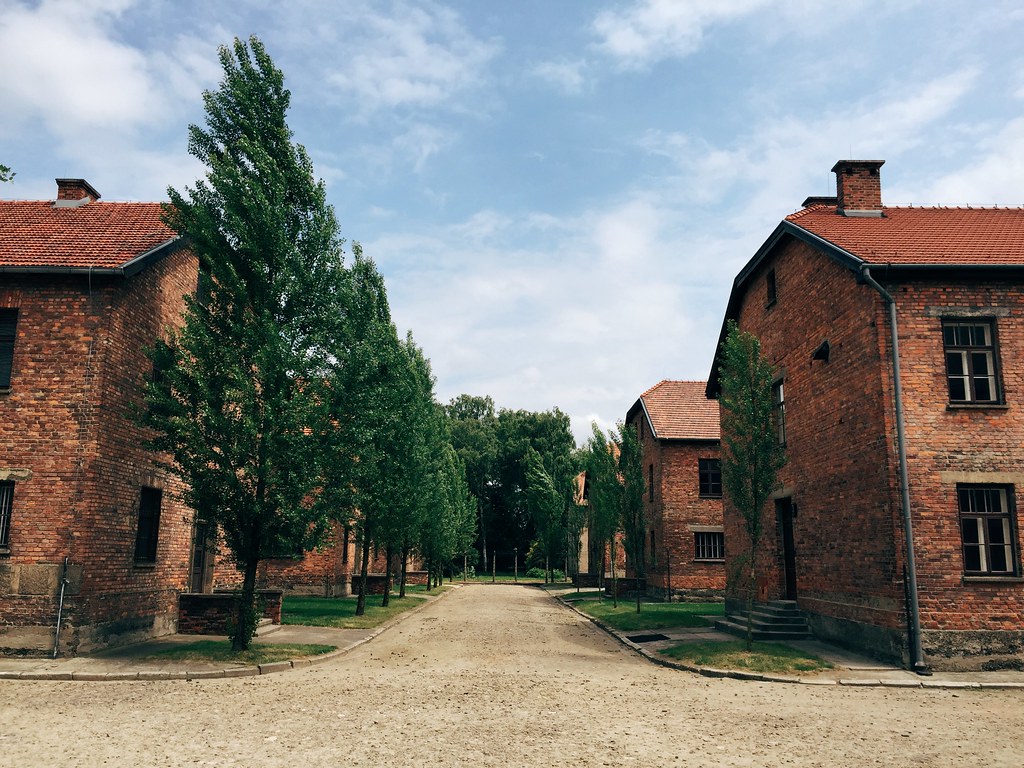 I took very few photos and even the ones I did take aren’t too heavy. Mostly I just wanted to listen and take it all in. The tour is well planned and very informative while not being overly emotional. I’ve been to the Holocaust museum and memorial in D.C. twice and I think it was way more intense than Auschwitz is, at least by design. Our Polish tour guide was very calm, quiet, and that’s how it should be. Even the lighting inside isn’t so intense. What struck me was that even though we live in a digital age and we love to take photos, I could tell that generally people were limiting their use like I was. And really, other than a few snaps for this blog, I’m not exactly sure what I would do with a bunch of photos of a place like Auschwitz. 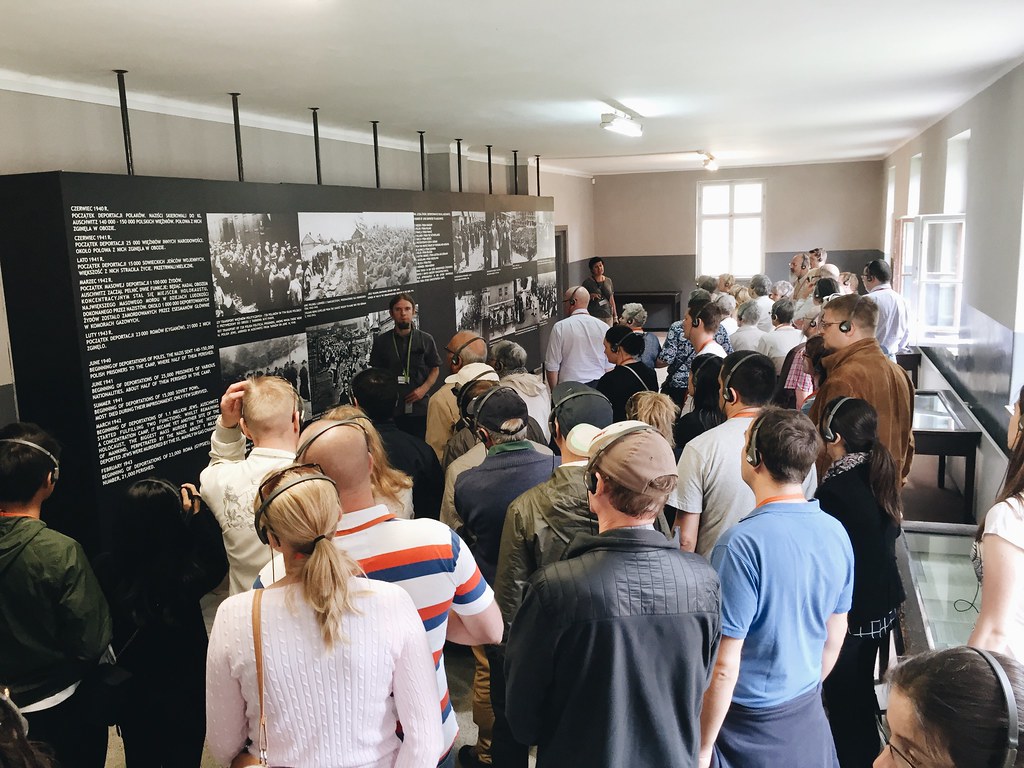 There are two parts to the tour. The first takes you through Auschwitz I which was a Polish army base that the Nazis converted to a concentration camp. The second part takes you to Auschwitz II which was built completely by the Nazis using prison labor. Like most Americans I had to study this horrible place in school, but today as we entered Auschwitz II I was overwhelmed by the sheer scale of the facility. No picture will do justice to just how big the camp is. The electric fence lining the perimeter just seems to go on forever, along with the railway which runs right down the middle of it. Below are two photos I took from the guard tower which give a little context but still the scale is hard to capture. 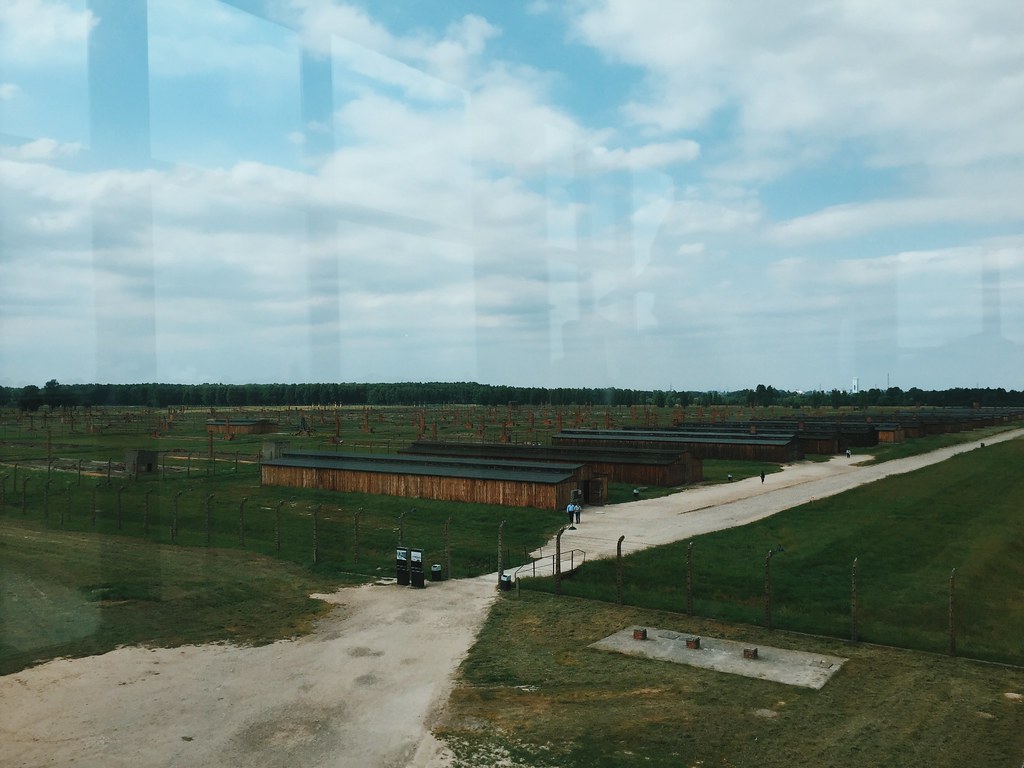 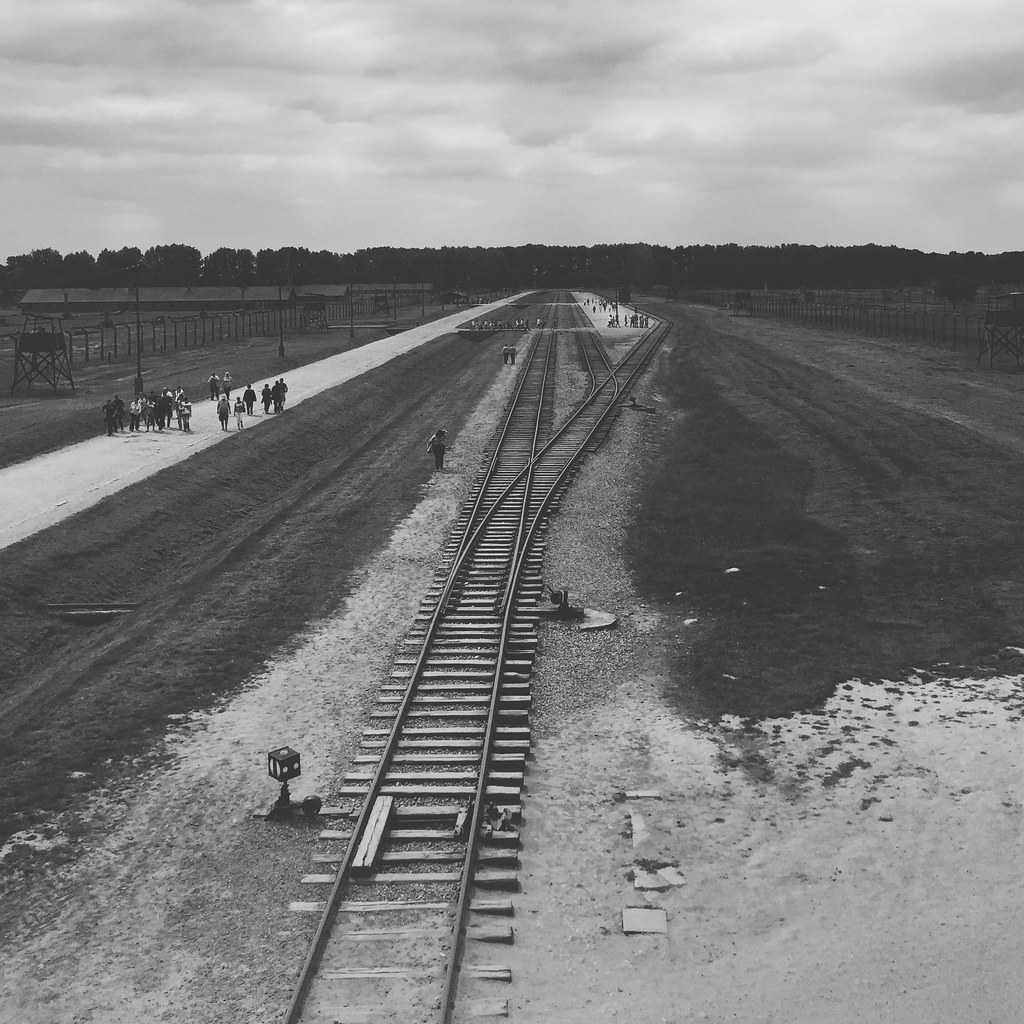 In the second photo above, if you were to follow those tracks to the very back (more than 1/4 mile–far!) there is a memorial that was erected for the more than 1.3 million lives that were taken at this place. On the ground beneath an artist’s sculpture are large placards written in every language that was represented at the camp (there must have been 10-12 of them). Below is the one in English. 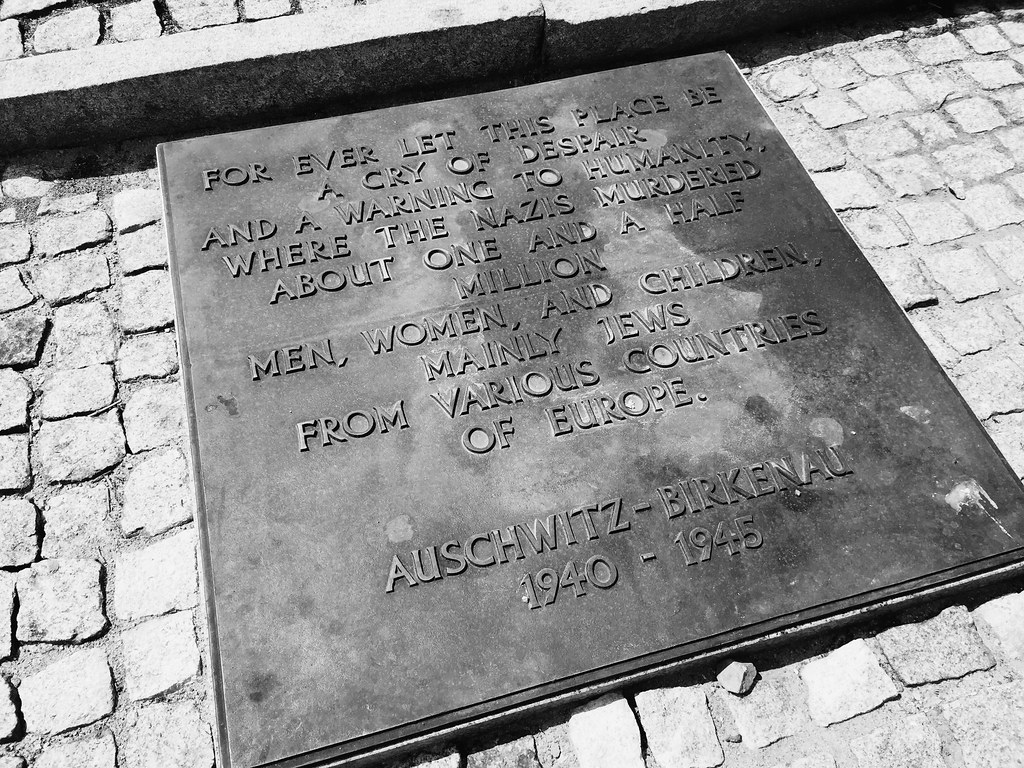 For the sake of my wife and others who might read this, I’m leaving out any details about the buildings and actions taken inside. If you know the history, then you know what happened. But I just wanted to say that standing in the rooms and seeing what the Nazis did caused me more than once to consider the sinfulness of my own heart. As much as it is right to be angered by the atrocities that took place at Auschwitz, it was the work of men just like me who did these things. They were just like me in the sense that they have the same sinful heart that I do. Mark 7:21-23 records the words of Christ when he said, “For from within, out of the heart of man, come evil thoughts, sexual immorality, theft, murder, adultery, coveting, wickedness, deceit, sensuality, envy, slander, pride, foolishness. All these evil things come from within, and they defile a person.” I guess that’s what I meant when I said earlier that I was taking it to heart. How could I not? 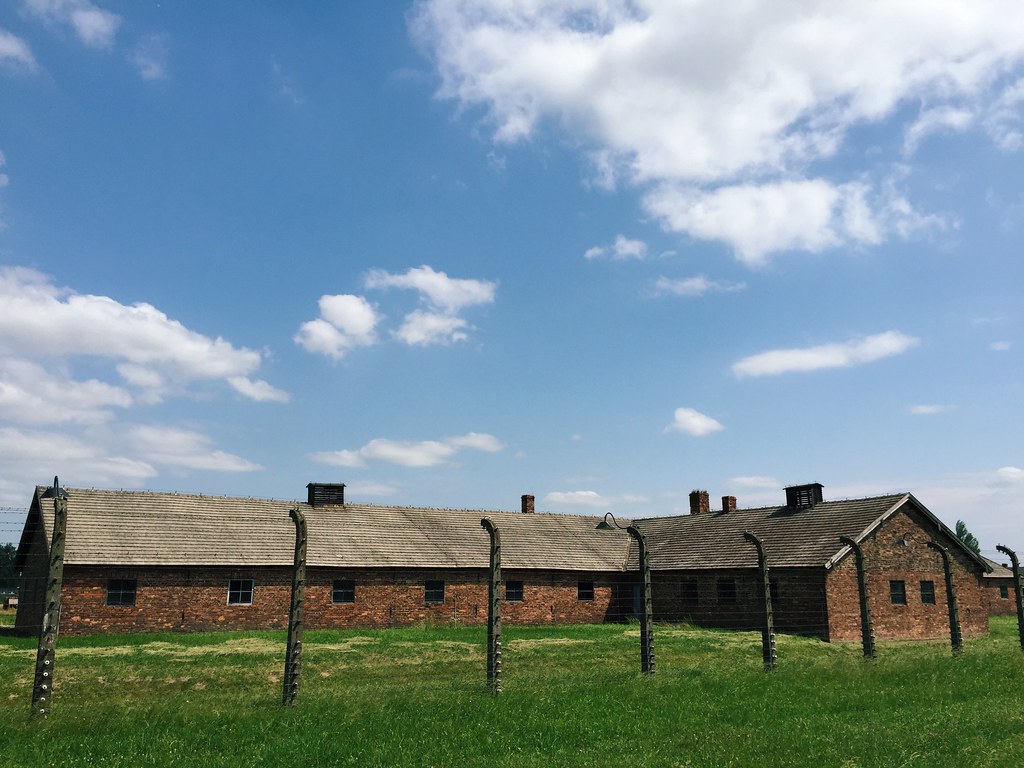 One of the last things that we heard today was about the liberation of the camp on January 27, 1945 (for some perspective, my own dad turned one year old on Jan. 28, 1945). The Russians were able to free the camp and about a week before this the Nazis (knowing the Russians were coming) began to destroy as much evidence of their crimes as they could. They blew up buildings, burned things to the ground, etc. and then fled. As I sit here tonight and ponder those events I’m actually thinking about the glorious and wonderful gospel which liberates our hearts from the penalty of sin. I don’t have to run from the Lord in fear like the Nazis did from the Russians, but my soul is liberated by the horrific death of Christ on a cross. The Nazis may have outrun the Russians (only 10% were convicted of their crimes), but unless they knew Christ and trusted Him in faith, they were never (or are never) able to outrun the God who judges their souls. It’s only in the Gospel that I can make sense of Auschwitz. Christ died for the men, women, and children who were murdered there as well as the men and women who ordered their deaths. He also died for my sin and your sin. As overwhelming as a place of death like Auschwitz is, I am equally overwhelmed by the place of life given to me and many others through the work of Jesus.

As Rick Steves said, “Auschwitz isn’t for everyone,” but the Lord used it today to remind me of His amazing work. For that I’m eternally thankful.

Then We Went to Prague