I shared yesterday that Titus was going to be part of some kind of event tonight that we honestly thought was a play. The directions we were given was that he was to have a mask or costume and have a paper lantern on a stick. Bethany actually ended up making him a lion mask because Titus wanted one and we thought there were two parts or something to the evening. For instance, maybe the kids come in masks and then they change into something else for a formal program. Either way, we weren’t sure.

Bethany commissioned me to go to the store and hunt for a paper lantern and a stick. I don’t know even know where I would find that in the States much less Czech, but we texted some friends here and they pointed us to the store that had it–a paper store in the town square. I found what we needed about thirty minutes before the program was starting, went home, and we all walked over to his school. When we got there everyone from the school was lined up outside and there tons of families still walking there. Below is a photo of a few pumpkins outside the school that were lit up which was a little confusing. Was this a Halloween thing? I also noticed the lights on the school were completely off which the made me seriously wonder if we were ever even going inside. As I looked around I saw kids dressed up as witches, skeletons, and had their faces painted. Are we trick or treating? What is going on? These are the questions that ran through my mind. When I saw Titus’ teacher she was dressed as a witch and had a broom. Oh boy…what have we gotten ourselves in to?! 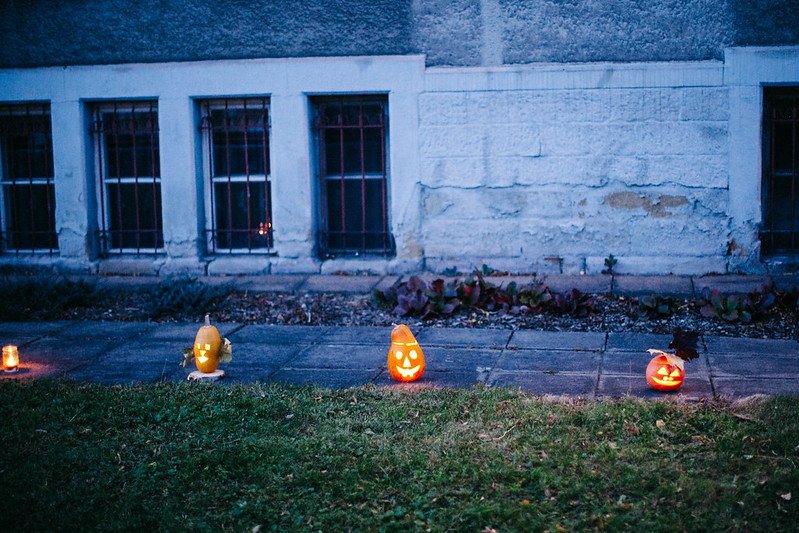 After seeing some of the other kids outside we realized there was a little misunderstanding about having a light inside the lantern so I ended up running (literally) over to the store and getting a stick with a light for Titus’ lantern. I had seen them on my first visit and knew now what we were actually supposed to buy. We just wanted to make sure that Titus had what the other kids had because remember, we still think he’s going to be a bear in a play. While I was at the store everyone ended up walking around the town with their lanterns, including Bethany and the kids. Bethany took a few photos of their walk (below). 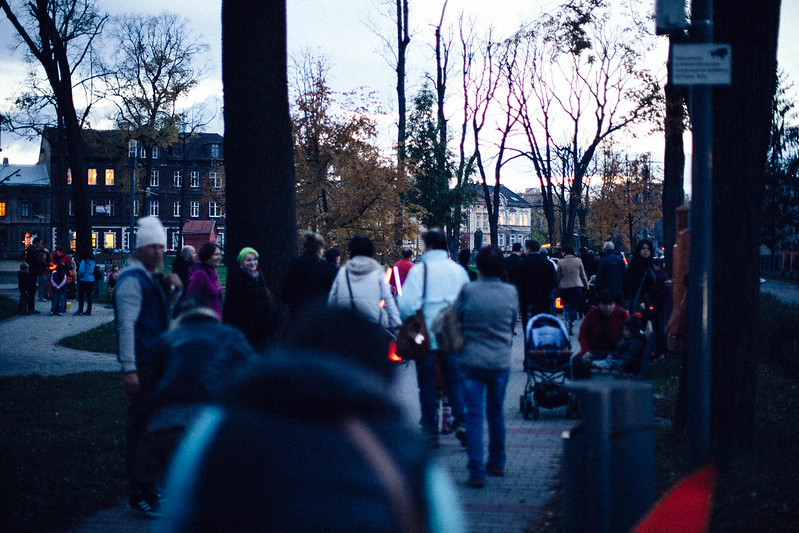 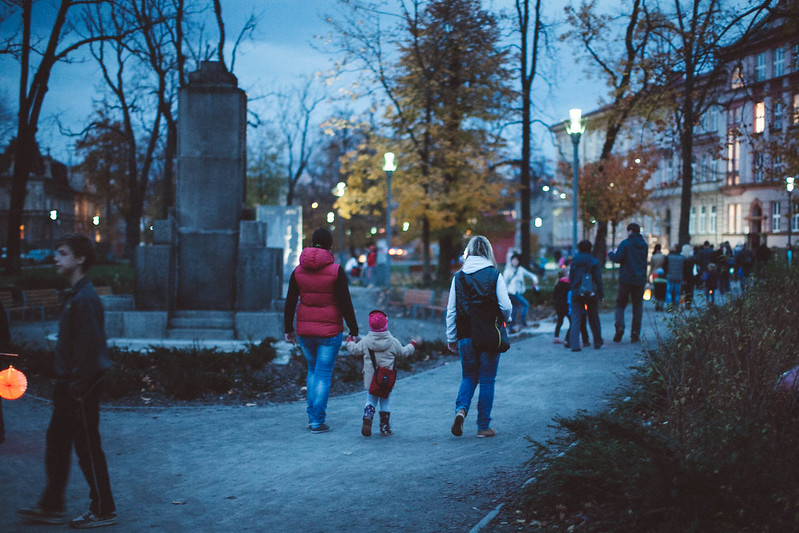 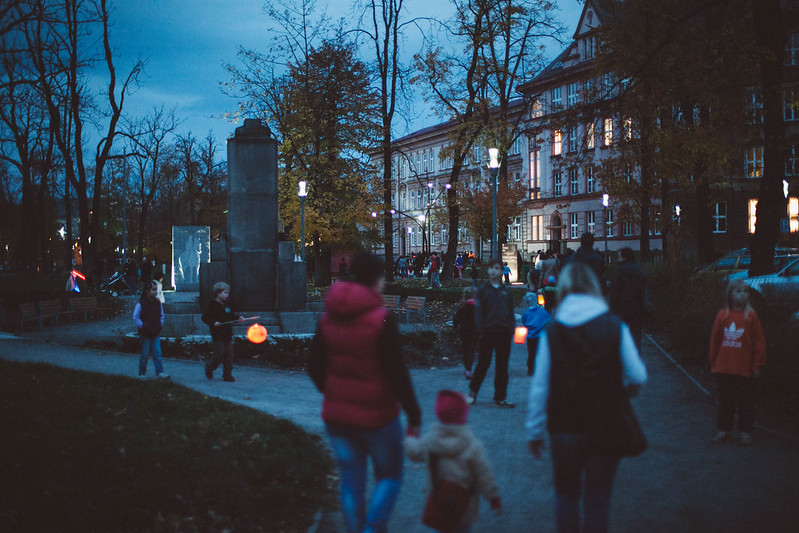 I met back up with the family as they were completing their walk around the park in the center of town. I put Titus’ lantern together with the light. Here’s a photo of him with it. 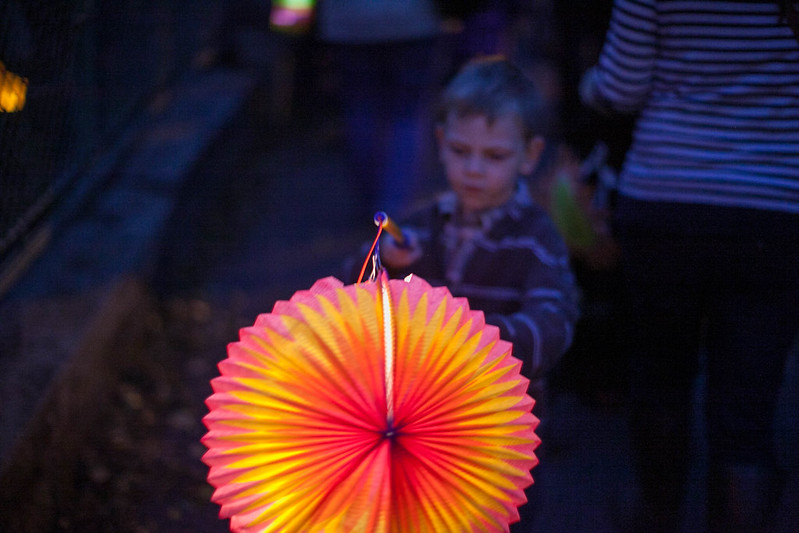 Mostly we just followed the crowd around which brought us back to the school at the end of the walk. We all walked into the school property and the all teachers were dressed up with bags of candy and wrapped treats. It was dark and very confusing for us so I stayed with Avery by the gate to the school and Bethany took Titus to the teachers with the bags. He got a little wafer bar with chocolate that he shared with all of us. The crowd began to move towards another part of the school yard so we followed behind. Everyone ended up sitting on the picnic tables and benches out in the playground area. Again, it was dark, so we just found a spot towards the back of everyone and just kind of sat there.

After a few minutes the teachers and kids started chanting something that we didn’t understand. This went on for a few minutes. How long will this last? I guess there’s no play tonight? Titus ran over to the slide and was playing because he knew his way around the school yard. He told us he played there all the time. Not 10 seconds after he came back to where we were sitting, we hear BOOM! and suddenly fireworks are going off about 30 feet from us. They were close and loud. The kids quickly covered their ears and Titus started crying and yelling, “I want to go home!” He’s not a huge fan of fireworks. I grabbed Titus and put him in my arms and told him he would be OK and that it would be over soon. Below is a photo of the slide he had just been on before the fireworks started to go off. 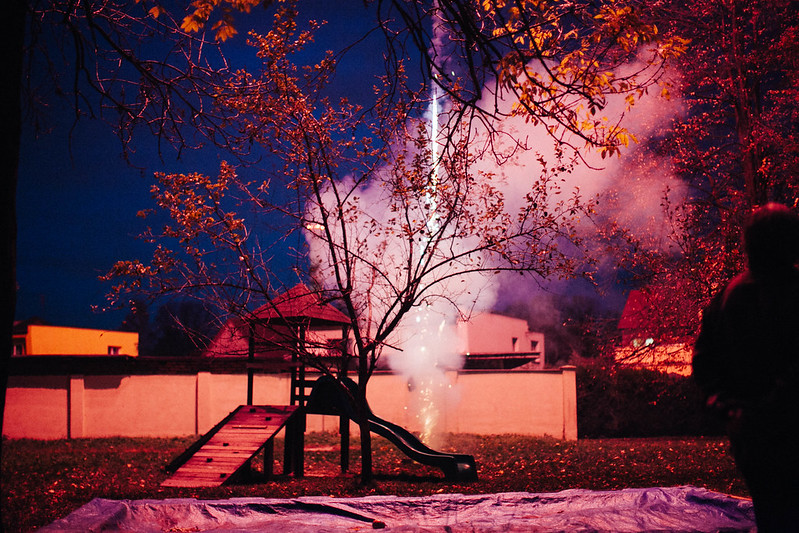 The fireworks show lasted about 2-3 minutes. Titus kept insisting we leave, but there really was no way for us get back to the gate with everyone standing around so we basically had to grin and bear it. I just started laughing. This is just not something you would ever see happen in the States: a bunch of preschool and elementary kids with their families standing a few feet from huge fireworks that are literally exploding directly above them…in the playground of the school. Welcome to the Czech Republic. 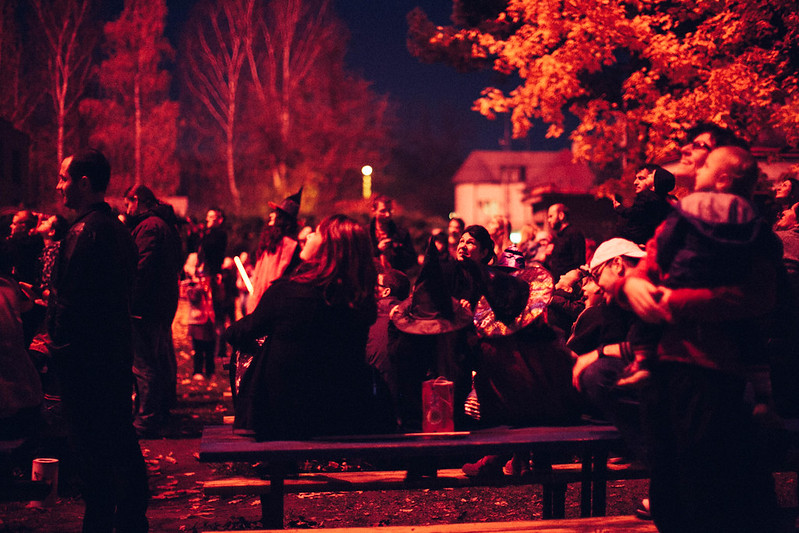 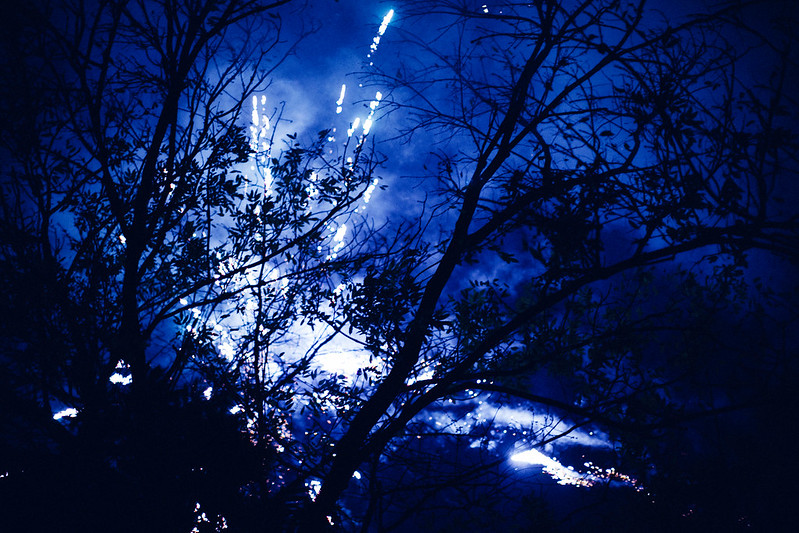 The fireworks ending signaled the end of the night and also confirmed that there was definitely no play or bear suits tonight. In the end it all turned out OK. Titus cried a little more on our way home, but we assured him, as we often do, that Jesus is always with him when he’s scared. We walked back to our place with some Czech friends from our church who have a son in the same class as Titus. They are a great family and that was actually the highlight of the night being able to spend a few minute with them.

I guess the moral of the story is we’re learning to trust the Lord in new areas. We have no idea what we’re getting ourselves in to sometimes, but we trust the Lord will lead the way as we walk by faith.