Today was Titus’ biggest school day to date. I say “biggest” because it was packed full of new experiences for him and for us. Before I talk about that I want to say that the entire day was an answer to prayer from start to finish. If you read our blog yesterday and prayed for this then thank you! God was so gracious today.

Titus was really excited about school this morning which is in and of itself an answer to prayer. Considering how he was on Monday, this was a huge blessing. Bethany took him to school early so he catch the bus for his field trip to another preschool today. What made today different was that he was going to be gone for the entire day until 3pm, as opposed to us picking him up at noon. In the photo below you can see his little head and stocking hat peeking up in the center as he gets read to board the bus. 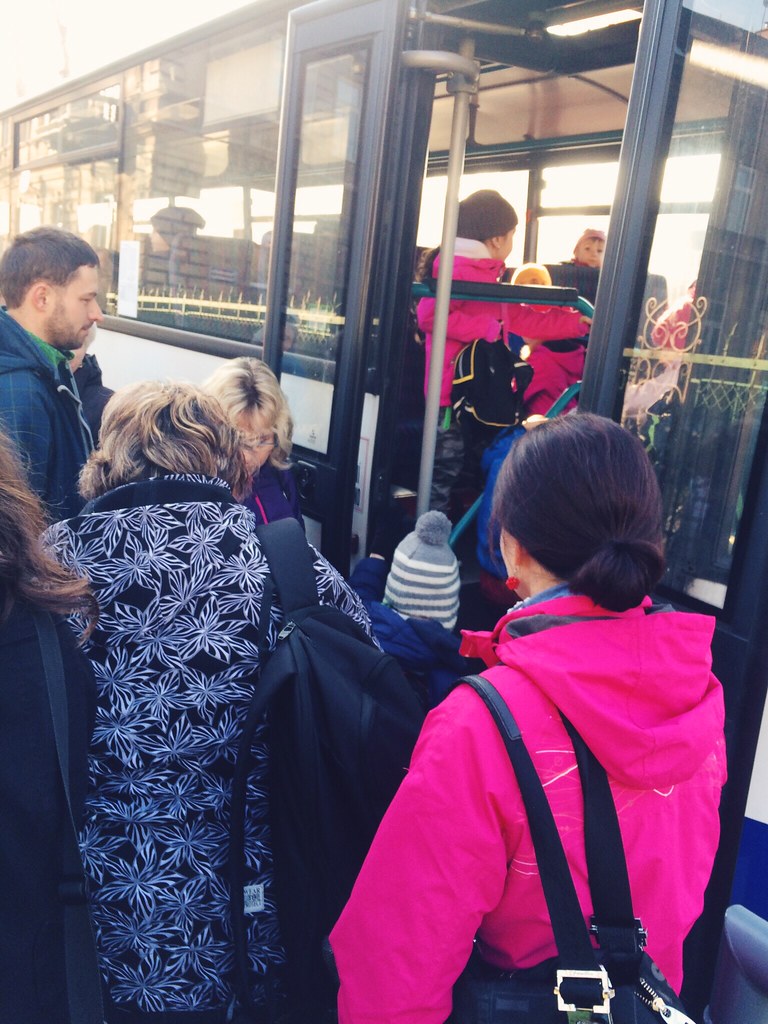 The bus left sharply at 7:45am and took the kids to a nearby village for a “school swap” thing where they just basically have a normal day but at a new place. We don’t really understand why exactly they did it, but here’s a photo of Titus on the bus as they were about to pull away. I think the school charters a city bus to make this happen because I don’t think the schools have their ow buses like in the States. And I didn’t ask Bethany if she cried, but I’m operating under the assumption that her eyes were just a little teary as she took this photo. 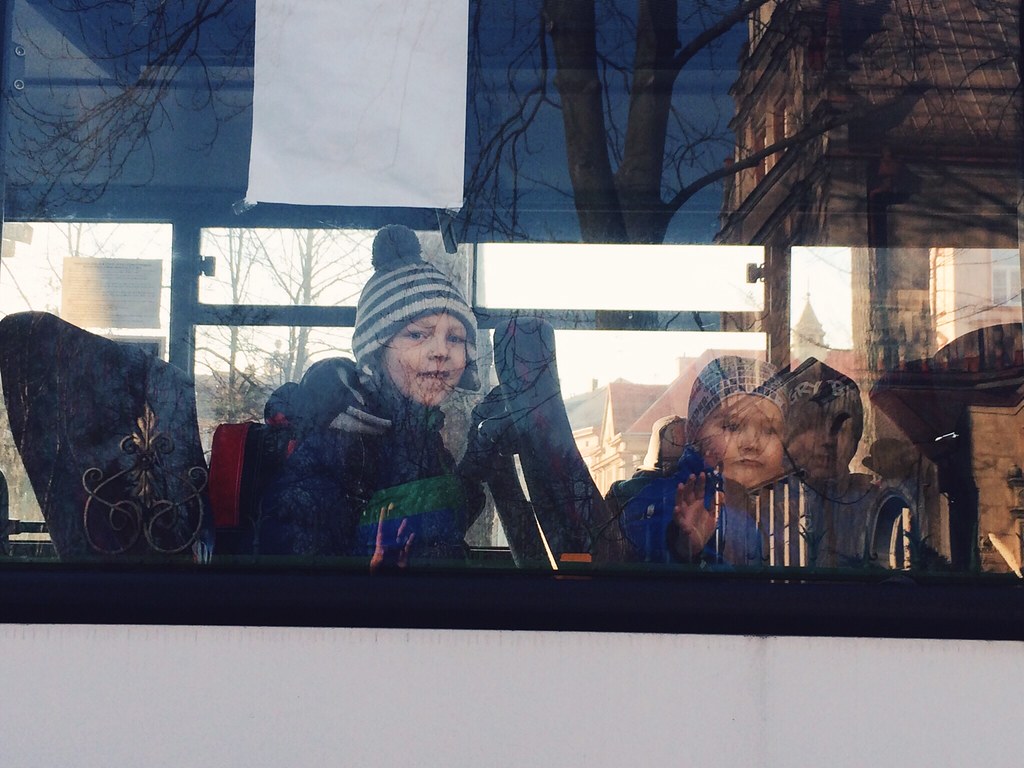 While Titus was away on his trip, I worked from home and Avery was hard at work too on her USA puzzle. She did the entire 50+ piece puzzle by herself today with no help from Mommy or Daddy. She was really proud of it and so I took a photo of her “big girl” moment. Admittedly, she has done this puzzle with us many times so she has it almost memorized. But instead of state names she always, “Where’s the one with the cow?” or something like that. It’s great. 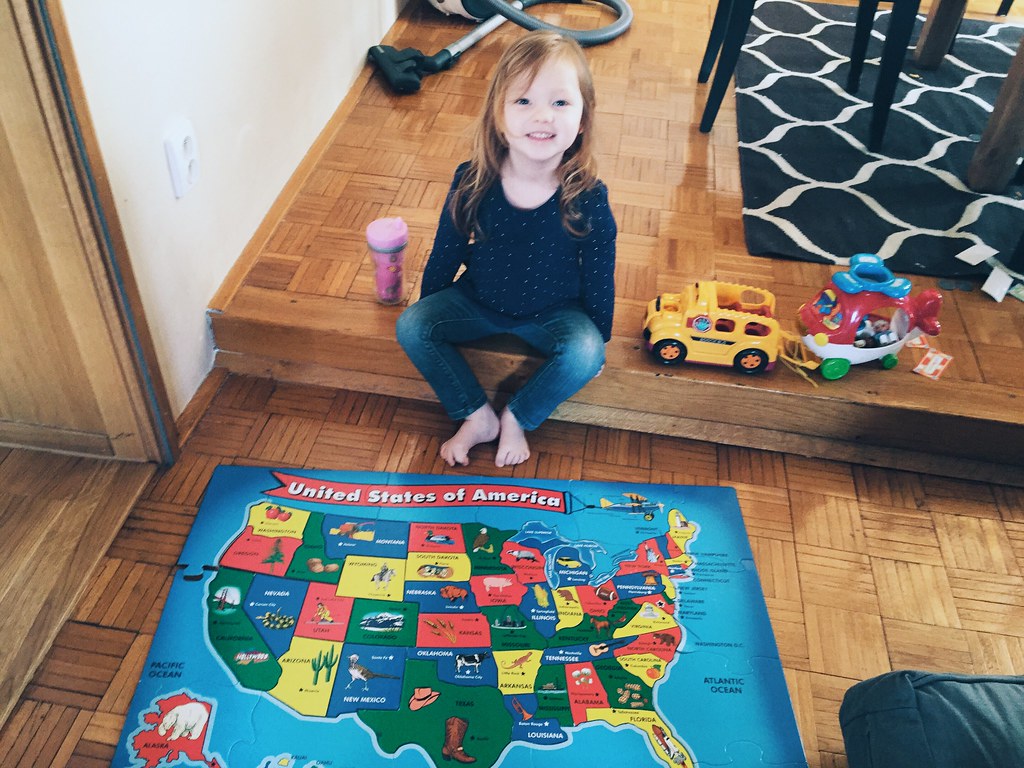 Also while Titus was at school, we had an appointment at 1pm to sign both him and Avery up for the next school year in the fall. Our friend Martina was kind enough to come help translate and talk Czech for us which was a great blessing. It ended up being a really quick appointment and we actually met with Titus’ teacher (this is also strange to me because why wasn’t she on the field trip?). She was really nice and we were in and out of there in just a few minutes. Here’s a few photos of us walking over to it. 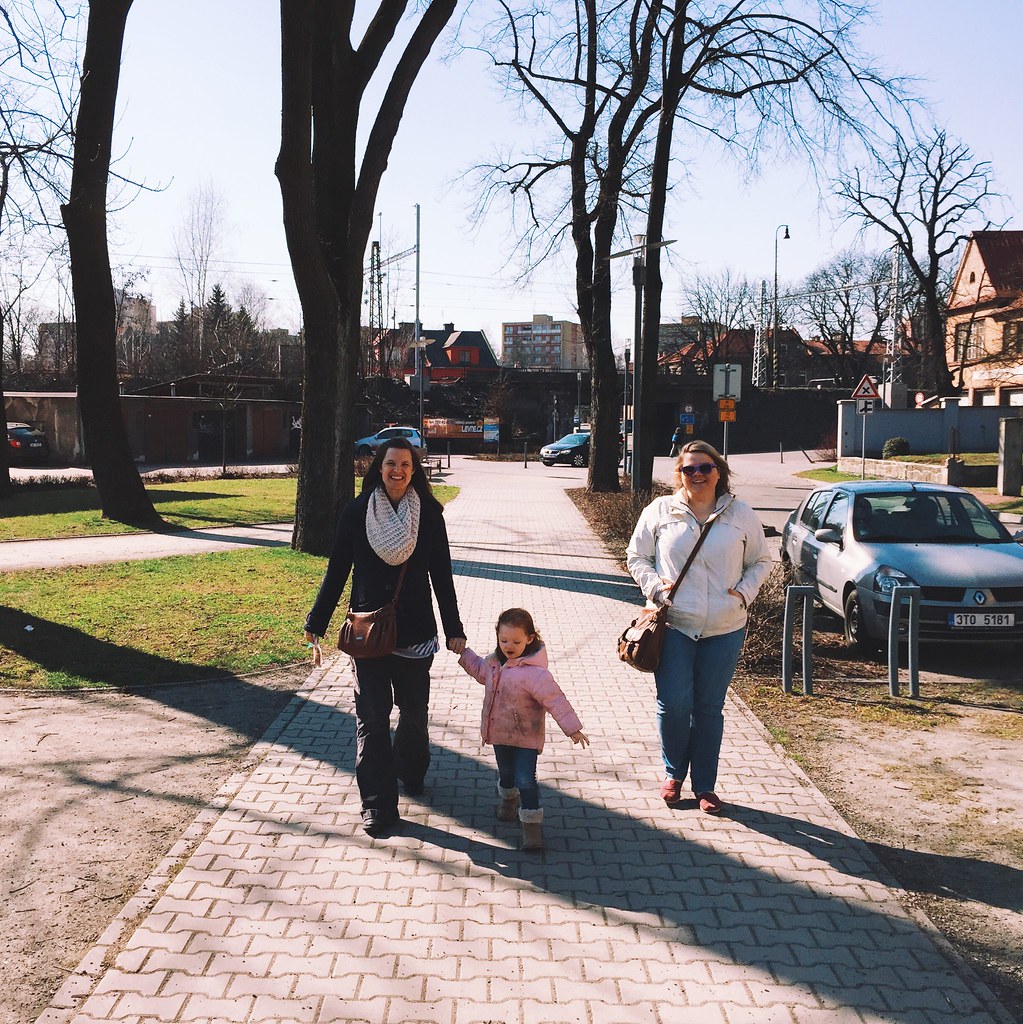 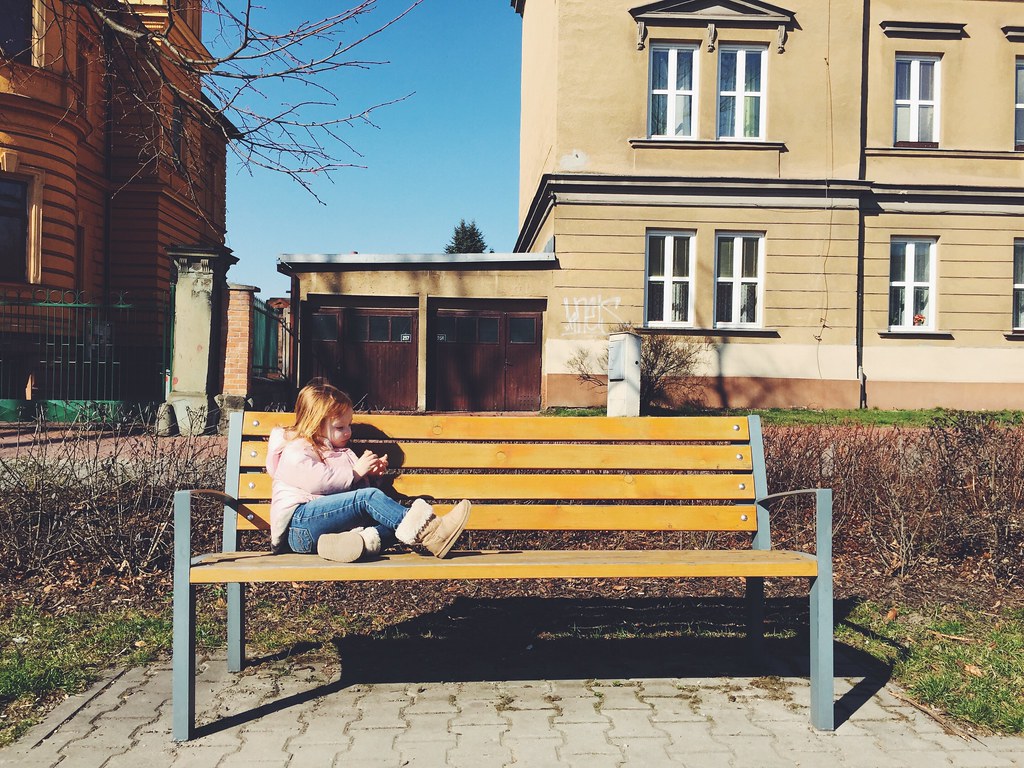 This photo below is of Bethany, Martina, and Titus’ teacher finishing up. 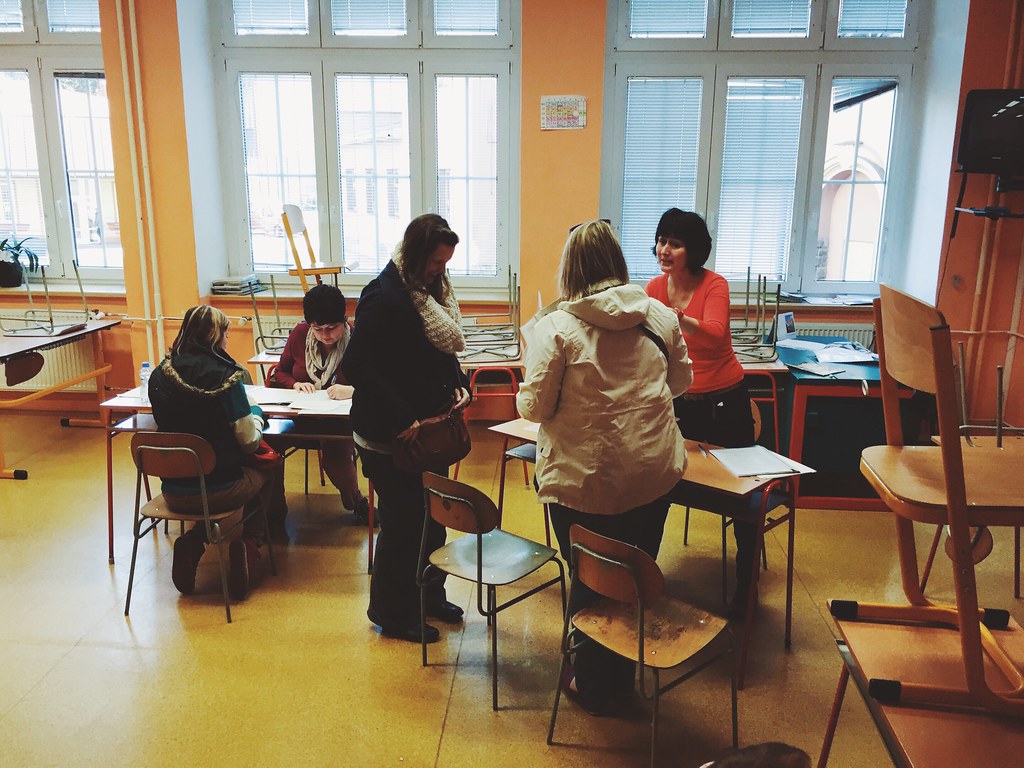 About ten minutes to three I walked down the road to pick up Titus from school hoping for a good report about his day. It only take a few minutes to walk from our place to his school so I was there early and as I stood there a woman walked up to me and said, “You’re an American, right?” in perfect British accent English. I was surprised, but I calmly replied “Yes.” Then she told me that her son and Titus are in the same class and that her son speaks English so we should get them together outside of school. This was actually an answer to prayer because we have really wanted to have more relationships with Czechs. She went on to tell me about herself and that her husband is from the U.K. and he only speaks English. We were talking for a while and finally said, “Am I supposed to go some place else to get my son?” She told me the bus was expected to arrive until 3:10 (which I didn’t know). If you want my opinion, it was just the Lord getting me there early so I could have this conversation.

She was very kind and gracious and thought that just letting Titus speak English to another kid would be a blessing to him (which we totally agree). We ended up exchanging phone numbers and we might try and plan to do a walk or go to the park with their family on a weekend. Just thinking back on it now I’m smiling because God is so good. She didn’t have to walk up to me and introduce herself and talk for a while, but I was really thankful just to have a normal conversation with a stranger. It has a very long time to just have a full, open conversation like that in English with someone I don’t know. I know that might sound weird, but man was it encouraging. 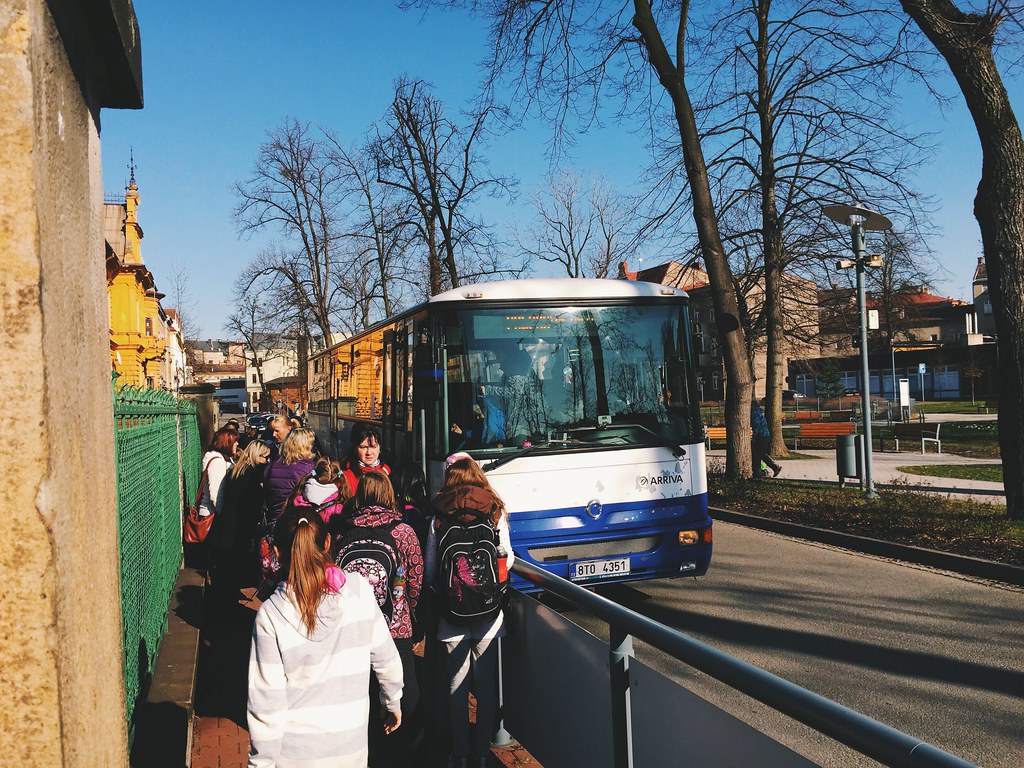 While finishing up my conversation with the lady at the school, the bus pulled up right on time. There were a few cars blocking the street that the bus honked at and when I looked over I could see Titus’ face light up and he waved to me. I waved back and just smiled at him. He looked so big, but still so small. I was going to take video of him getting off the bus but since I was still kind of in conversation with that lady I only got the above photo.

All the kids got off and Titus ran towards me and I said, “Dude! Did you have a good day?!” He said, “Yeah, dad. It was awesome!” He told me all about the bus ride and the slide at the school that “doesn’t have any grass.” I asked him about nap time (which he’s never done at school) and he said, “I got my dinosaur pajamas on all by myself!” He told me he cried for us a little bit while they were walking, but I’m not quite sure where or how long, but I assume it wasn’t too bad because it didn’t seem to bother him. All in all, I think he did alright. The funny thing, if he didn’t do well, I probably wouldn’t even if we’d find out. The teachers don’t speak English and Titus isn’t always the most reliable source of info! I’m just happy that he was smiling when he got off the bus and overall he was exited about his day. He’ll be doing it all again on Friday and when we talked to him about that tonight it didn’t seem to bother him.

It’s weird to watch him grow up. Seeing him on that bus was surreal. I have memories of being on the bus around his age and I’m realizing he will probably remember this too. This is whole process is part of entrusting your kids to the Lord. He has to watch over them and I have to trust that God is taking care of them. The Lord is sovereign over everything including school bus rides! And I can’t and won’t always be there for everything Titus experiences, but I’m happy to be there to pick him up.