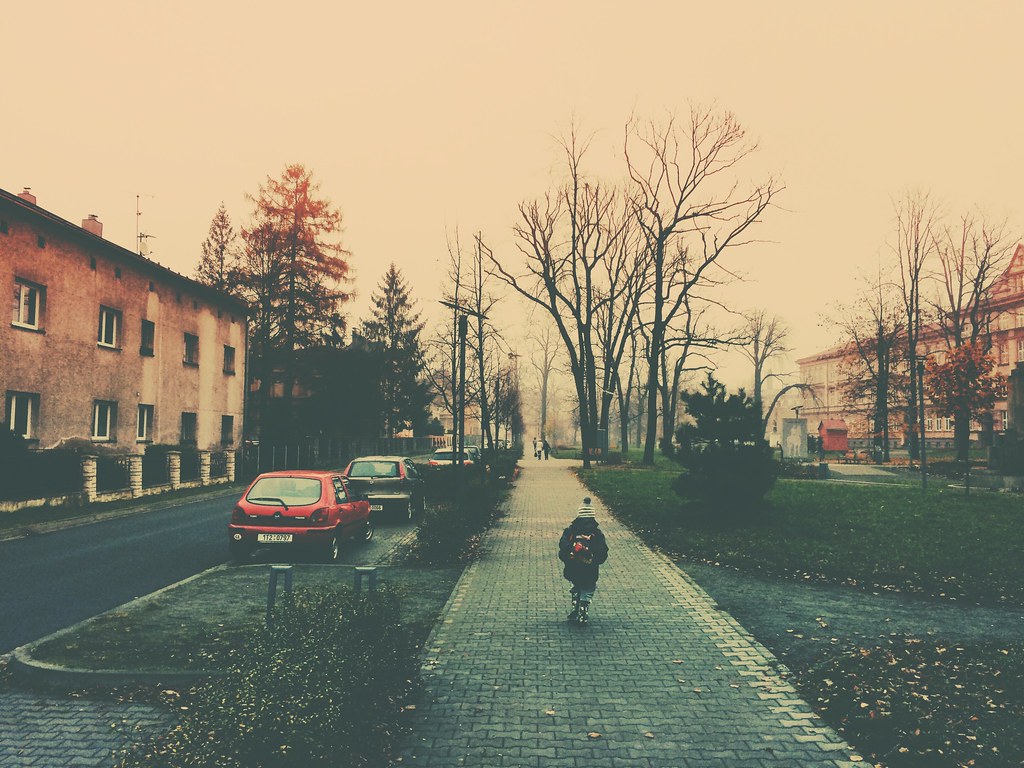 “I can’t go to school; it’s so foggy.” These were the first words I heard this morning as Titus woke Bethany and I up. I looked out the window and he was half right, it was really foggy, but that wasn’t going to keep him from going to school.

The fog had lifted a little by the time we walked to his school (photo above), but for the most part the day stayed foggy. I try to check the forecast on a regular basis to see what’s upcoming but I never saw fog in the forecast. Honestly though, we can’t complain. Lately we’ve been hearing from family in the States that it’s warmer here than most of the U.S. Last night I saw a map of America that showed the majority of it in blue (e.g. cold), with a lot of states showing highs in the 20s and 30s. This is like 15 degrees cooler than us so we’re very surprised. We’ve been hunkering down and expecting severe weather, but so far it’s mid November and I don’t even think it’s been below freezing the entire month.

No matter what the weather, Avery’s looking fashionable. 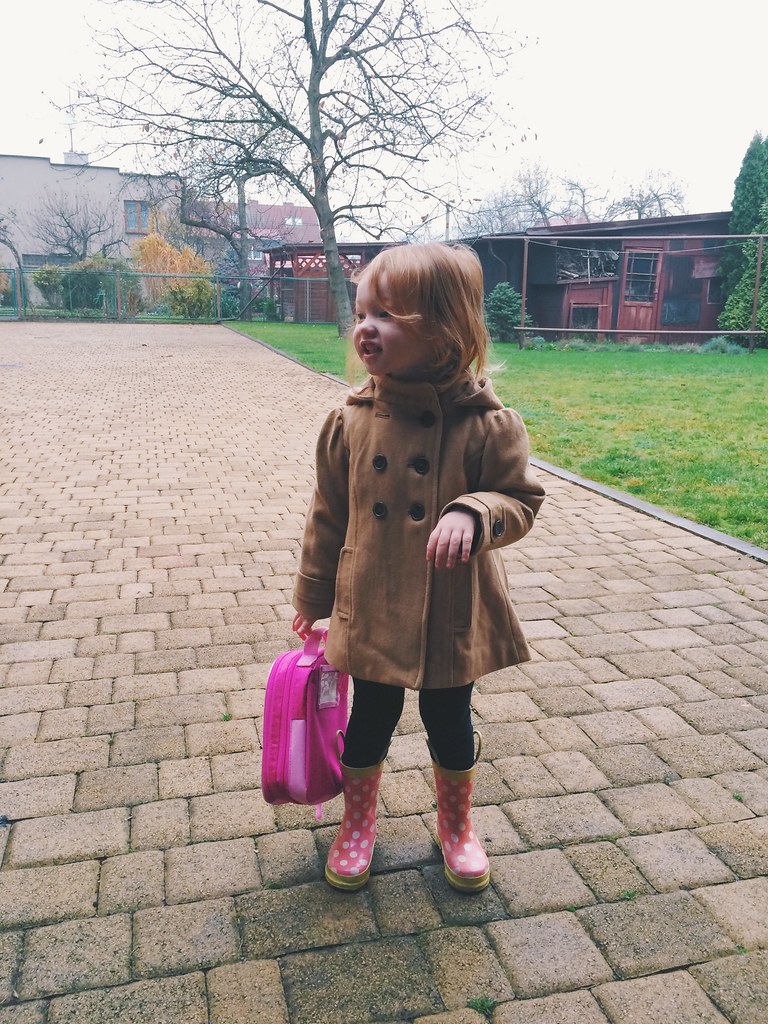 This evening Bethany left with our friend Rachael and headed in to Poland for a youth women’s retreat with the girls from our church. She was originally asked to speak, but with all of us being sick (yes, Avery and me are still hacking) she opted out this time around. Even though she’s not sharing, she was excited to be a part of it and hopefully grow some relationships with the young women in the youth ministry. I sincerely hope it goes well and that God uses that time to grow relationships and build a strong community among the young women.

With Bethany out this does present me with twenty four hours of Titus, Avery, and Daddy time. Tonight that meant taking the kids to McDonald’s for dinner. Is McDonald’s twenty minutes away by car? Yes. Would it have been possible for me to make dinner for them at home? Maybe. Did I want to kill time and make it easy on myself? Absolutely. But hey, you have to at least give me a little credit. We did bath time when we got home, jammies were put on, and Bible reading time went off without a hitch. Not a bad night! Now my only concern is if McDonald’s here is open for breakfast? 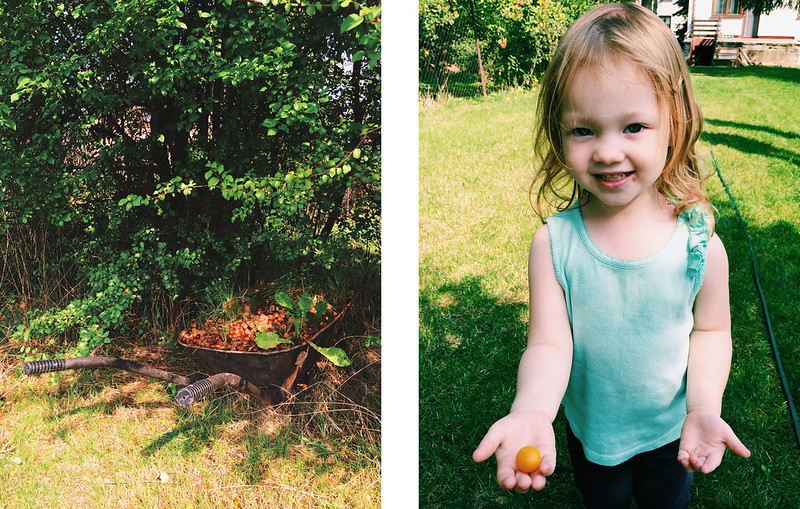 We drove to a nearby town called Třinec to meet with the headmaster of a local preschool today. Somehow Natalija got Bethany’s phone number and connected with us this past week to have us over to her house. Her desire was to meet our family and talk to Bethany about helping out after school by teaching English to kindergartners. She was a very sweet woman who has two grown boys, one who is 22 and the other 19. We spent the afternoon with her and her oldest son, Daniel, and enjoyed tea and a wonderful Czech pastry called Bábovka (pronounced “BAH-BOVE-KUH) outside in their garden. Above is a a photo of Avery holding a tiny plumb which we picked from her true. In the left photo is a wheelbarrow full of them. Natalija’s husband actually baked the Bábovka for us and she told us that the recipe was at least “a few hundred years old.” Below is a photo of this delectable treat. 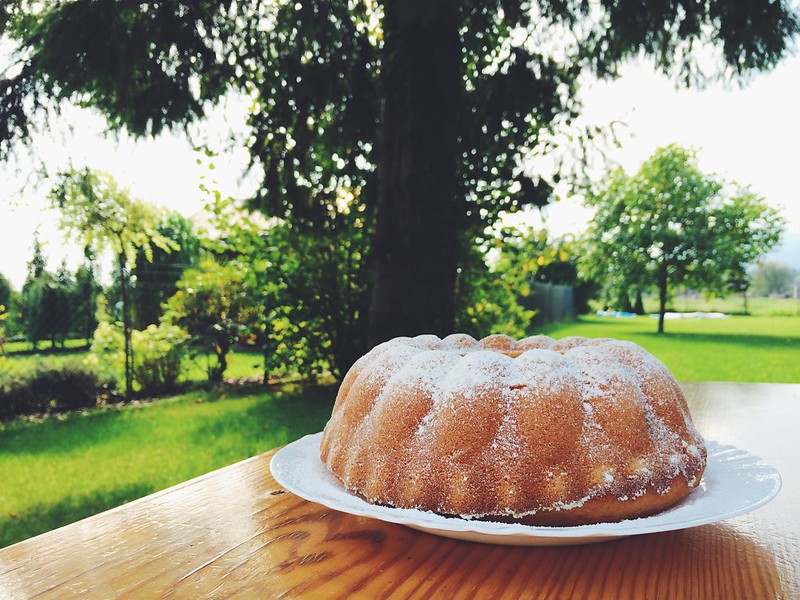 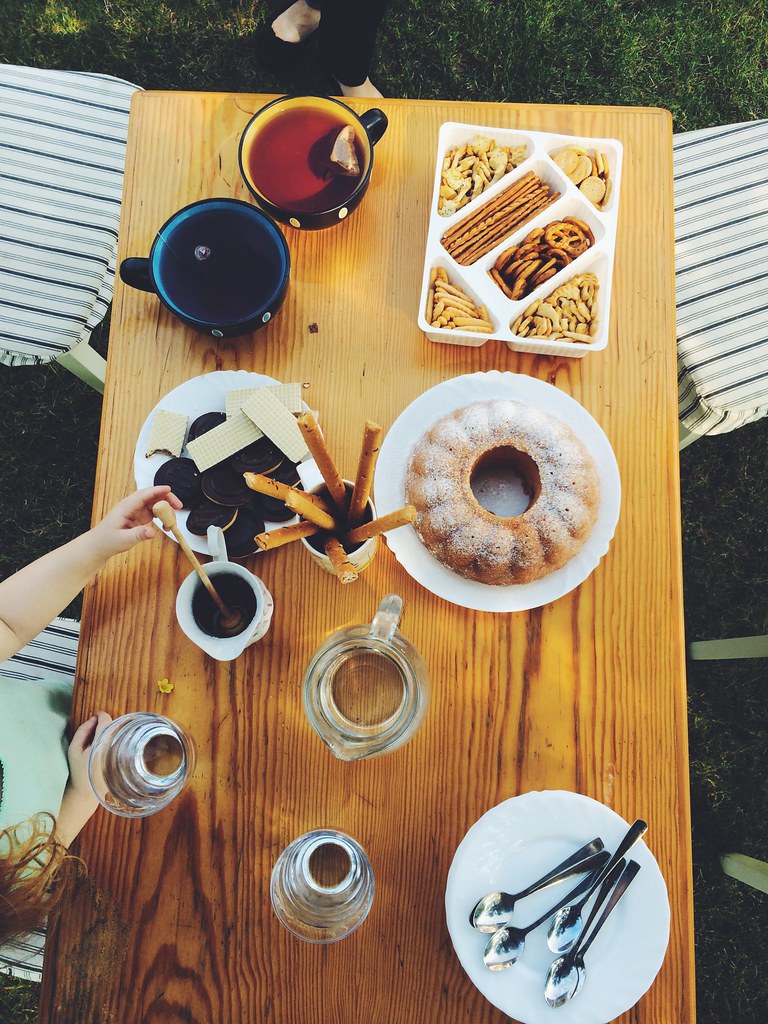 Natalija is actually Russian but moved to Czech about twenty years ago. She speaks great English, Russian, Czech, and even a little Italian. High energy would be one way to describe her, but that might even be an understatement. We were given a full tour of her three story house which is currently under construction. At one point she showed us a little cabinet with some Russian items she owns. One item in particular is from the fifteenth century! She inherited it from her grandmother or something, along with some old books that date from around the same time. My mind has a hard time fathoming that kind of history and it’s just sitting in a display case in a family’s house in Czech. Below are some photos of the display case and her dining area which she told us was decorated with things she bought solely in Hungary. 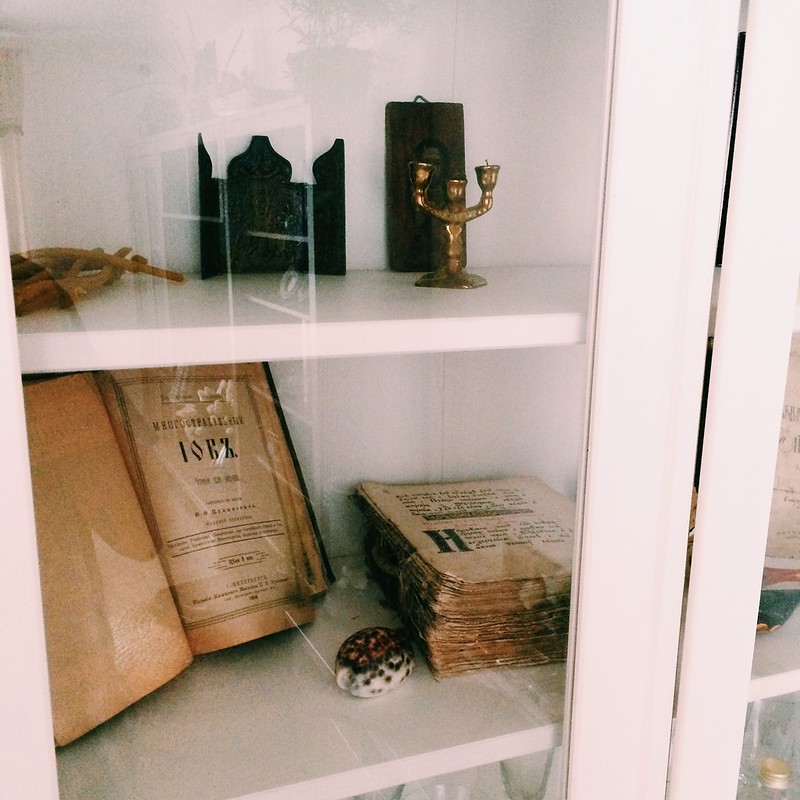 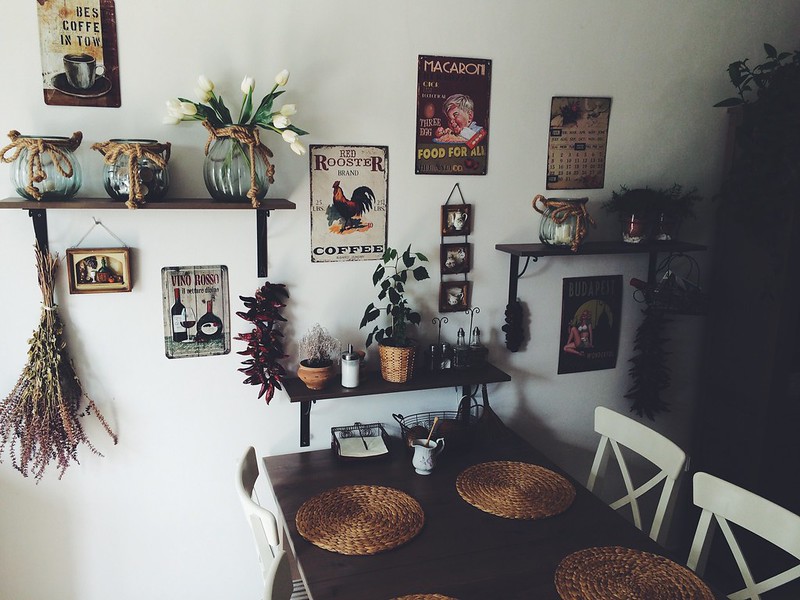 At one point during our tea time Natalija asked what we do. After explaining that we were missionaries and telling her about Josiah Venture and our ministry she told us that she grew up Russian Orthodox and that her mom is actually a nun. She started telling us funny stories about her mom who was once a very wealthy woman in Russia but left it all to be a nun. But as the conversation continued she expressed her fear of Muslims and asked us what we thought. Bethany and I did our best to clarify what the difference between Christians and Muslims. We also talked about the political system that Muslims desire and that’s when Daniel, her son, piped up. “I’m an atheist and I’ve read the Bible a little bit,” he said, “but I see the God of the Bible telling people to kill their kids just like Muslims kill people.” A bit startled, I said, “You mean like Isaac and Abraham?” And Bethany asked, “Or do you mean like stoning disobedient kids in the Old Testament.” He said, “Yes,” but I wasn’t sure to which question. He ended up telling us that he thought Muslims were just an archaic society and that the modern society is just more advanced than them.  “Wow”, I thought to myself.

Knowing it was an opportunity to talk about Christ Bethany and I just began to share with them Christ and grace. Bethany talked about not being able to earn your salvation and that there’s nothing you can do to work your way to God, in stark contrast to the Koran. I encouraged Daniel to read the gospels and look at what Christ did. Amazingly, and this hard to express, but amazingly, there was no dissension at the table. No one was angry or upset and we just kept right on talking. Within an hour of arriving we were talking about Christ and honestly I wasn’t even sure that I wanted to go when I woke up today. Natalija and Daniel didn’t bow the knee to Jesus today, but maybe we were the first people to talk to them about Christ? Maybe, just maybe, we’ll get more opportunities to share Jesus with them again. We have open door now and we’ve been invited back and would love to keep this relationship going. We prayed for them today and tonight and would covet your prayers as we pursue them. 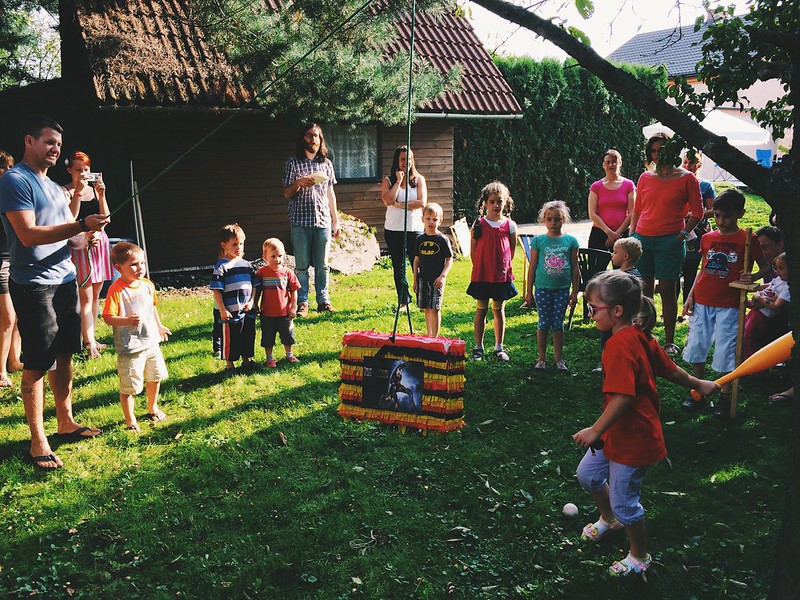 Immediately after leaving Natalija’s house we went to a birthday part for Titus’ friend, Beni, who turned five. Beni is the son of Casey and Kristin who are missionaries with JV as well. We had a wonderful time there and even went in their pool for a while. They had a home made piñata and even played a “pin the tail on the donkey” type game, all with an Iron Man theme. Even though Titus and Avery had skipped naps and were pretty tired from the morning, they did pretty well. And believe it or not, this wasn’t our last stop of the day. 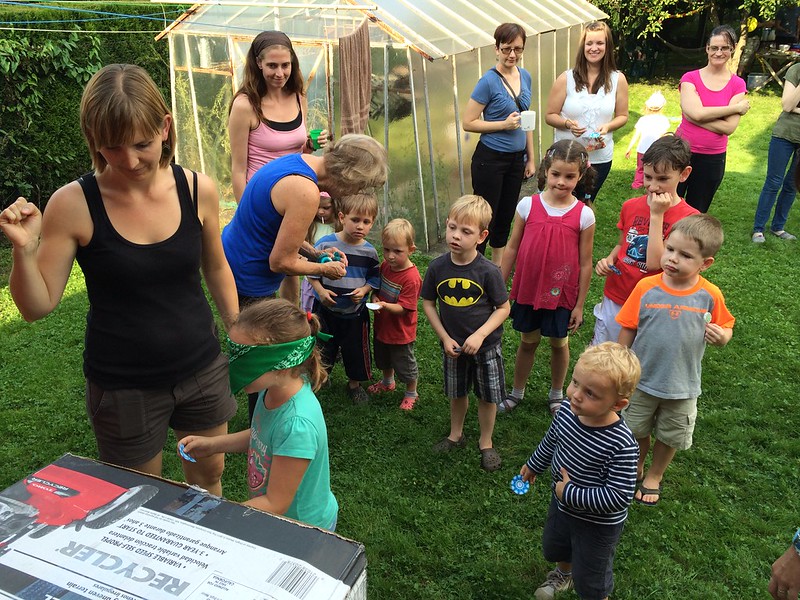 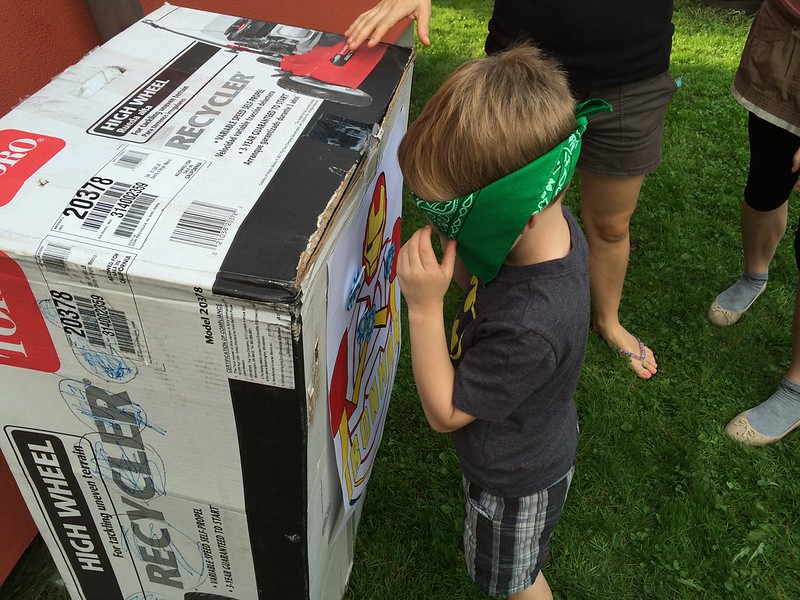 From Beni’s party we went straight to our church’s youth group meeting that started at 5:00pm. We have wanted to go for a few weeks now but tonight was our first time. Without question we had a great time. Titus and Avery did really well all things considered and we just had a really fun time with the students tonight. For me, this was the piece I think I’ve been missing most which is just spending time with young people. Czech students are so sweet and friendly, and many of them speak English. We played games with them, laughed with them, and from what I could tell we were the only married couple there. Below is a photo during one of the games where you had to run down the middle of this tunnel thing and below that is a video of the boys being boys. 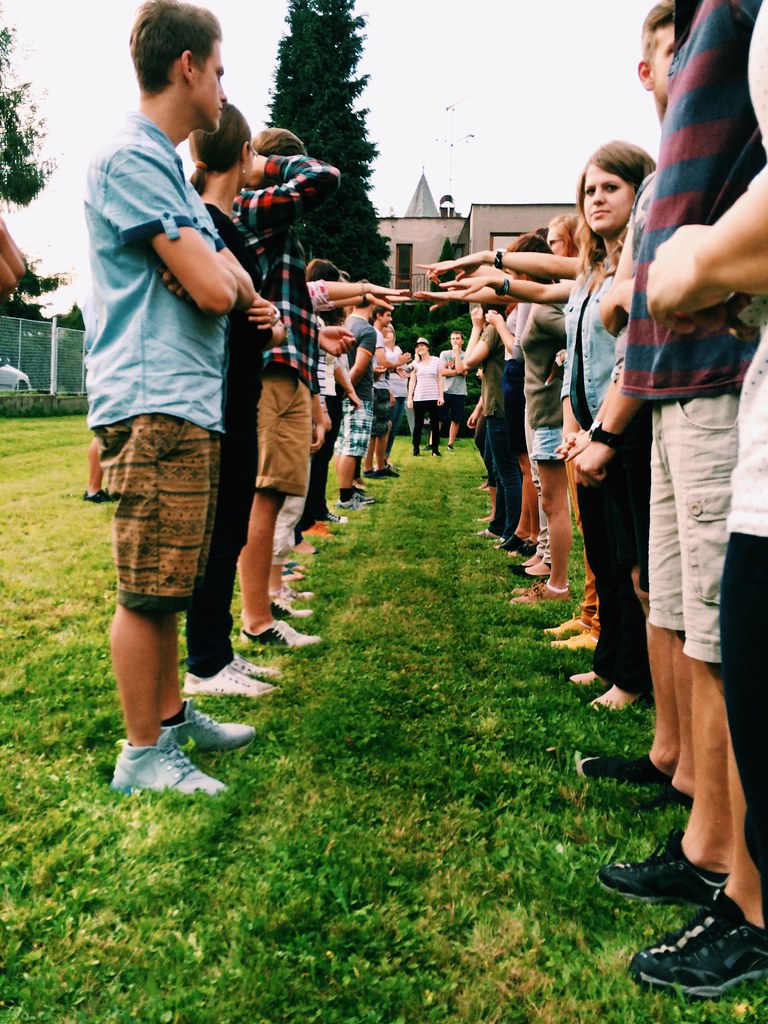 The whole youth group meeting was very similar, if not identical to what you would fine in the States. The format of the whole night was similar with games, message, music, and announcements. There was at least forty students there tonight and I was talked with some of them it sounds like a few our from different towns as far as twenty minutes away. Even though we had a very full day, I really felt like we needed to be there and my heart was encouraged by these young people. God is truly moving among the youth in Czech! 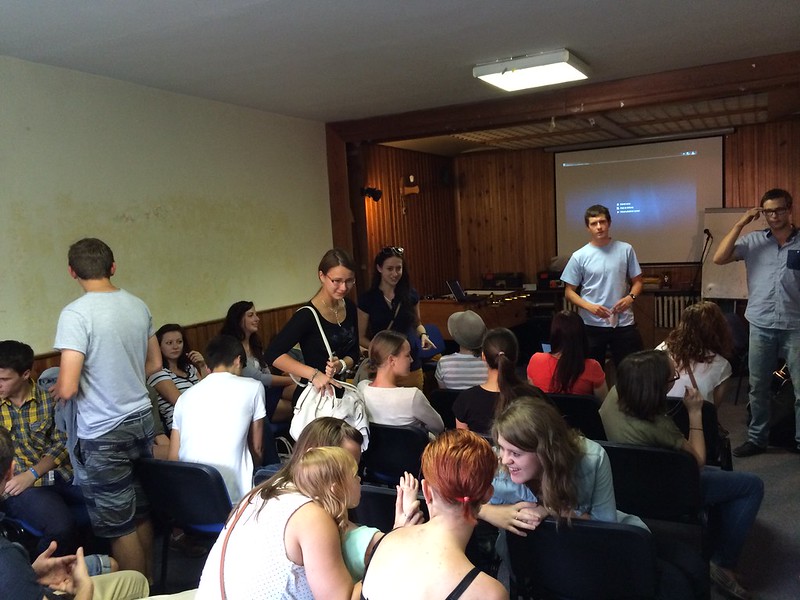 Ah! So many emotions are hitting me tonight, but I am just sitting here in awe of God’s hand on our family. It was so fun to do ministry together today. From spending time with unbelievers, friends, and then our church’s youth we have had a full and joyful day. We learned a ton today and I believe it will only deepen our faith. I am thankful to my Savior for pulling the scales from my eyes and showing me Christ. Those same scales currently blind people like Daniel, Natalija, and no doubt some of the young people at church tonight. Oh that Christ would open their eyes! This is our prayer on this full day. To Him be the glory.

A quote from Burk Parsons in the March 2013 Tabletalk magazine:

“The problem today is not so much that young people have consciously rejected ancient biblical values but that they have not been taught what they are, much less been trained in them.”

“…we have neglected God’s call to train up the next generation of young people in the way they should go. If we are to redirect the current paths of young people, we must begin in the church by taking up the charge to come alongside younger men and women, and teach them the old, ancient values of God’s Word.”