It’s really hot right now. According to a Czech news Web site, we’re experiencing some of the hottest days on record in Czech Republic. That wouldn’t be a problem except for one big factor: no air conditioning.

Now I want to make sure I’m really careful about what I say and how I say it. I know, for instance, of missionaries who live in intense heat all year round. They have to live with constant warm air in their house with very little relief. That is not the case for us whatsoever. To those friends and missionaries that serve in unbearable heat week in an week out, God bless your ministry. I mean it. Just little taste of the heat this past week is reminding me to think and pray for you, wherever you may be. That being said, I do want to comment on what we’ve been trying to do to escape this heat. 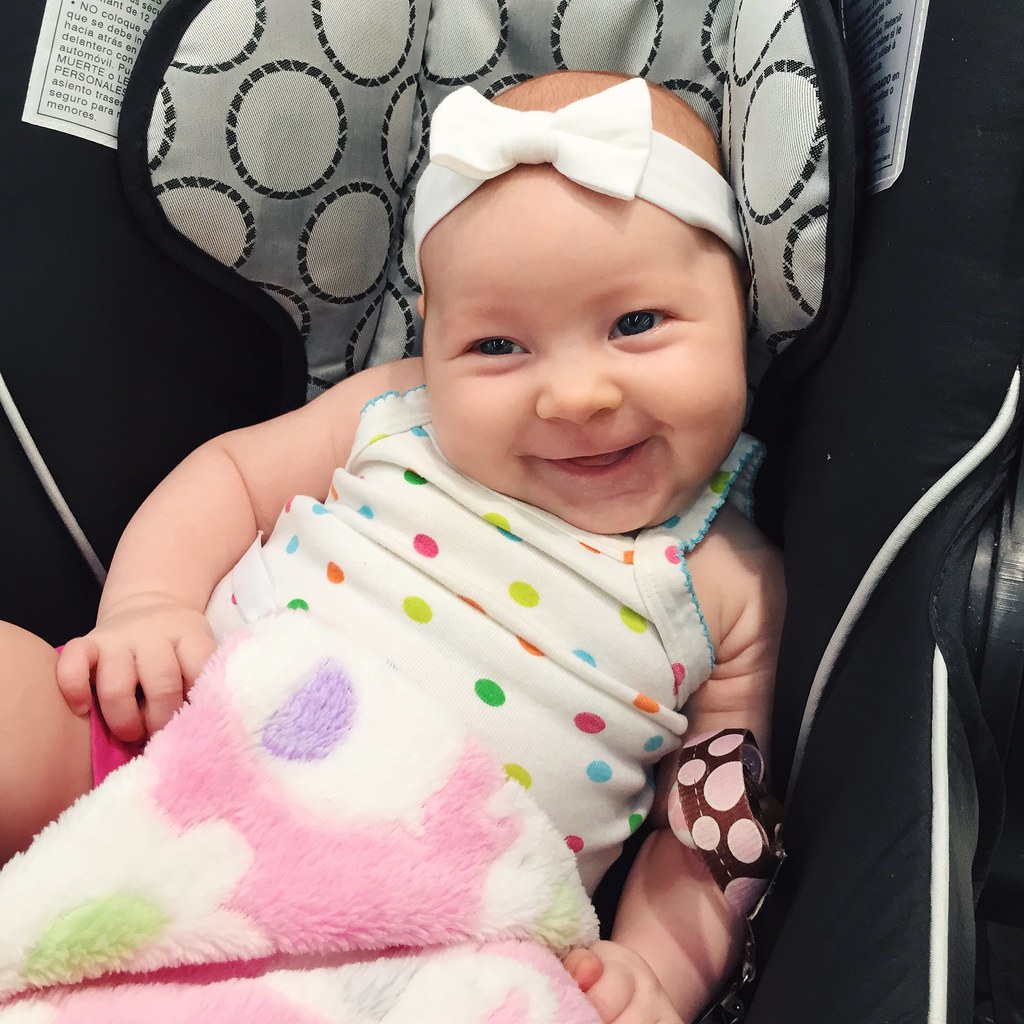 Our apartment just holds heat in. With concrete walls and no air conditioning, we’re just stuck trying to get air to move through the house. Over the weekend we just couldn’t do it anymore and decided we were leaving town to a large mall in Poland to find some AC. On Saturday we basically the entire day there, walking around, eating meals and letting the kids play in the air conditioned play area. Judging by the number people there I think they all had the same idea we did. Above is a photo I got of Karis while Bethany looked around one of the Polish stores. 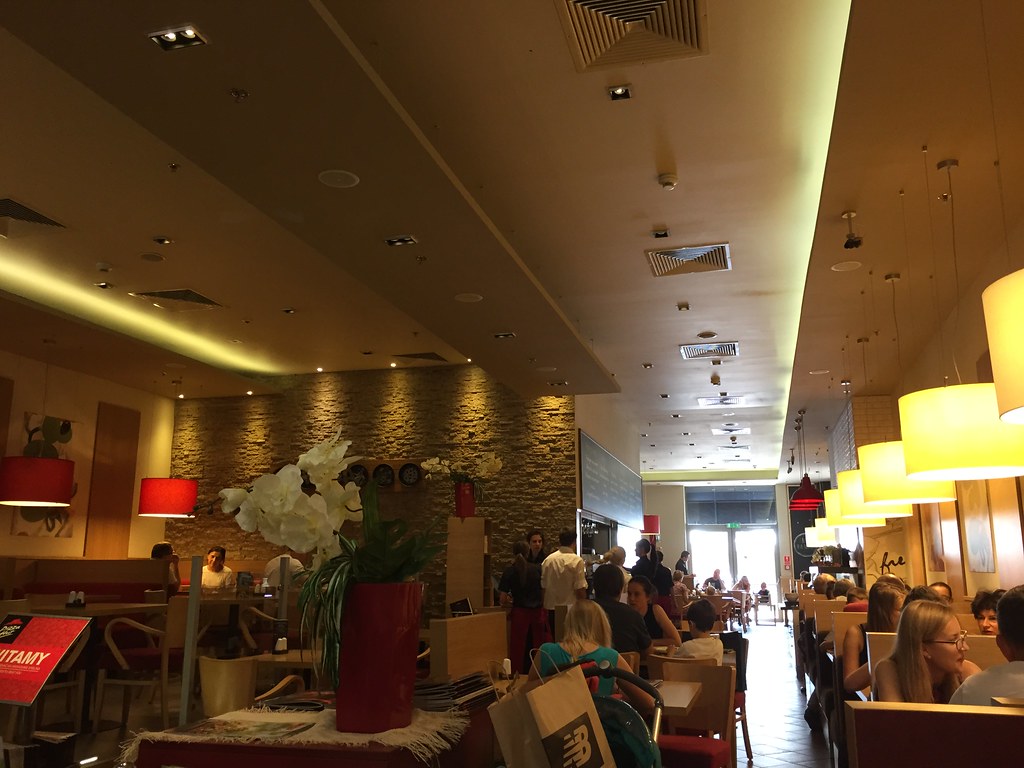 When we got to the mall, the first place we decided to go was to Pizza Hut (shown above). For you American readers, you’re going to have to lay aside all your preconceived notions of what Pizza Hut is and allow me to tell you about Pizza Hut in Poland. To compare it, it’s more like California Pizza Kitchen. It’s a fancy, sit-down, restaurant (at least this one was). We had heard they were nice, but we were shocked. They had waiters, lots of salads and pasta on the menu, and really good pizza! We all ordered pan pizza, except for Titus because he wanted spaghetti. Everything tasted it great and we even decided to go for the Chocolate Chip cookie dessert which was an oversized cookie with vanilla ice cream on top. It was a lot of fun and here’s a picture of Avery’s pizza. 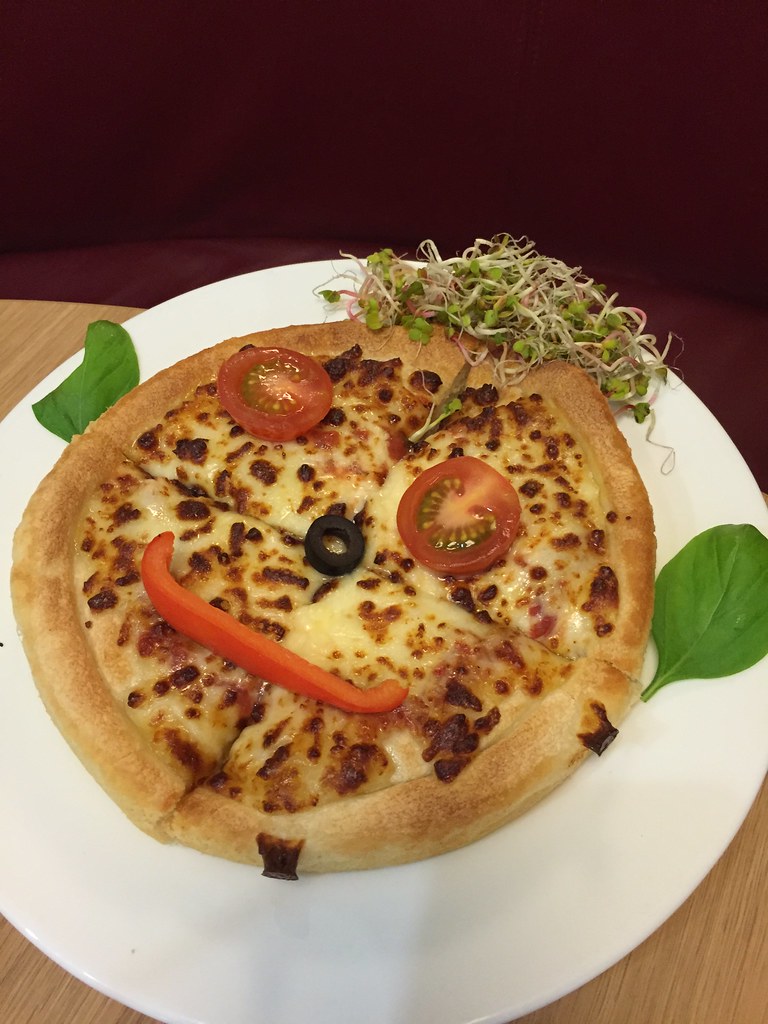 After food we did some shopping and eventually grabbed some coffee. The mall we went to is huge and we eventually made our way to the kids play area. You pay a few bucks for an hour of play time and they have staff there to help the kids and there’s a ton for them to do. Why America hasn’t jumped on this money making machine is beyond me. I sat and read a book while the kids played and Bethany did a little shopping with Karis. Here’s a photo of Titus with the playground behind him. 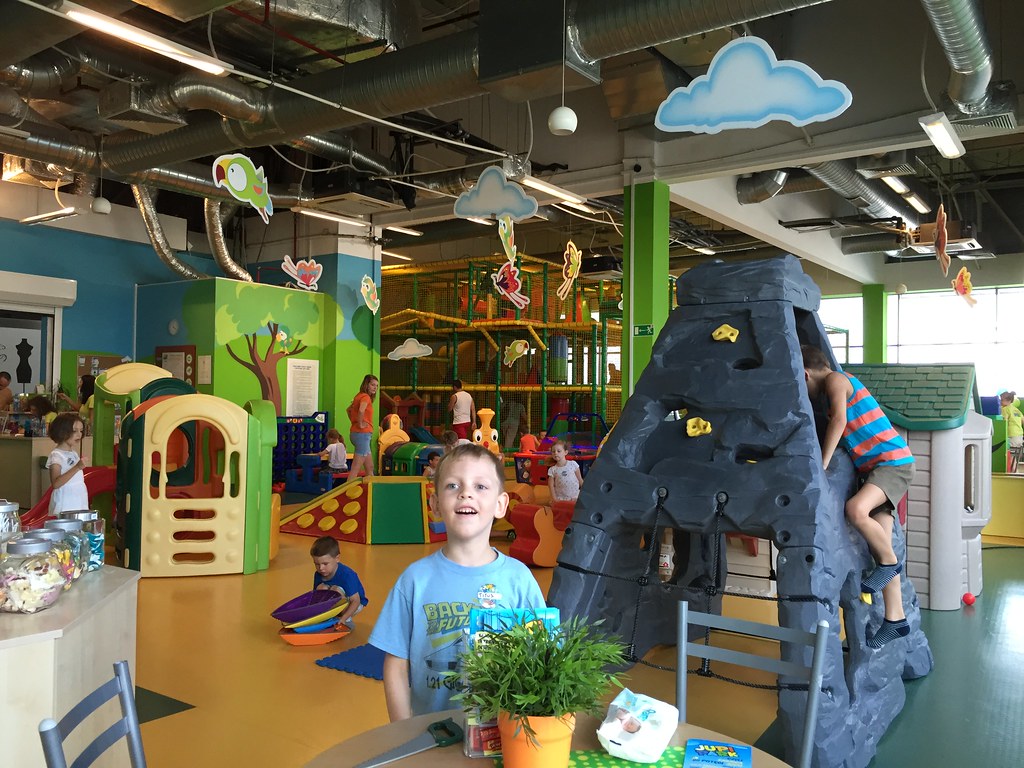 Since we were going all American on the food we decided for an American class, Burger King, for dinner. We wanted to get the food to go and head to the hardware store to look at little air conditioning units. Titus went with me to order the food and we got those Burger King crowns which I wore through the mall with Titus all the way back to the car. At points their were Polish people tapping each other on the shoulders and pointing at me because I’m sure I looked ridiculous. Bethany and the girls were in the car and when we got there Bethany was just laughing at me and said, “You’re a good daddy.” Thanks, babe. I’m sure you were laughing WITH me and not AT me. 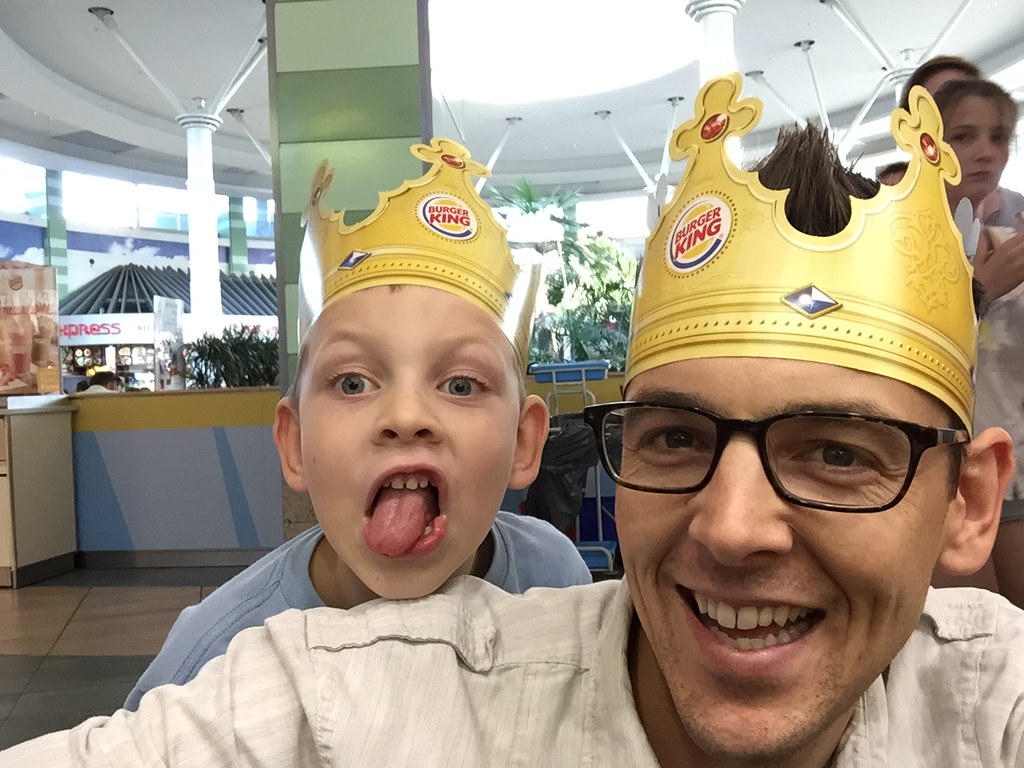 We tried six different stores to find a little air conditioning unit that was both powerful and affordable. This is no easy task in a place that doesn’t really have AC. What we ended up finding and buying was a little unit that was around $160 (US) that we currently have sitting in our window sill. It’s a swamp cooler that uses water to cool down the room and it’s been a pretty big help the past few nights. Here’s a photo of it in the store (the price on the side is in Polish currency). I’m calling it R2-D2. 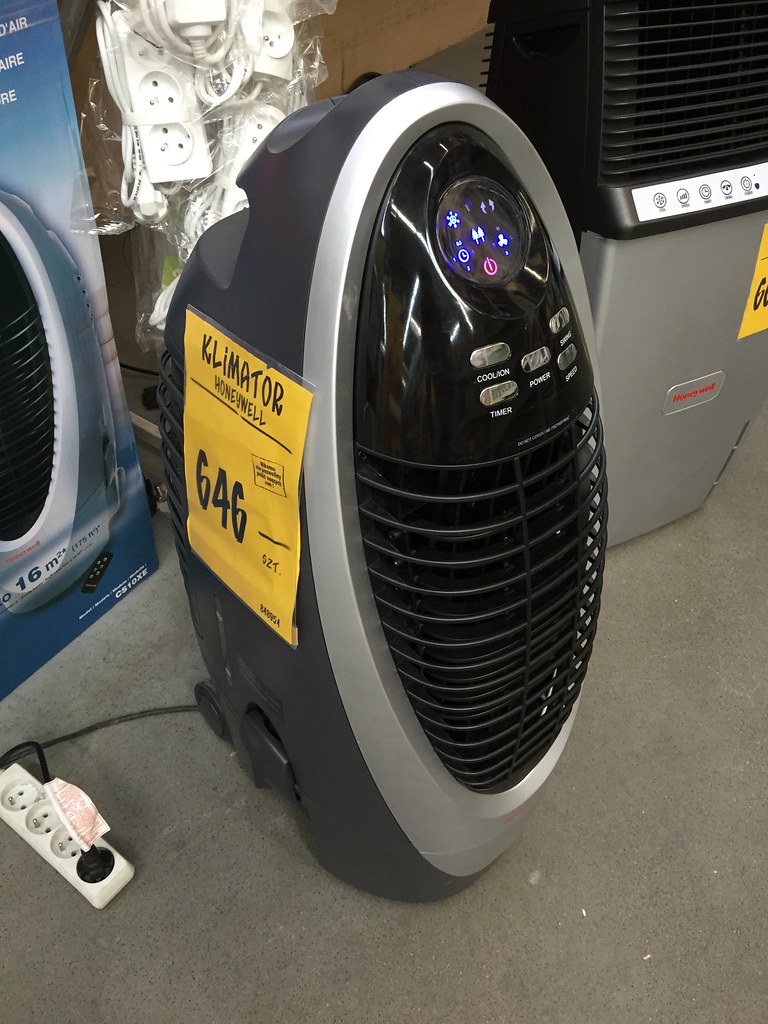 The next day we basically did the same routine, only this time we went to a Czech mall instead of Poland. Essentially all we did was go there for lunch, walk around, and let the kids play. There was a bench near the kids area with Ronald McDonalds so I took a little photo of the kids next to him. Quite honestly I’m a little jealous that Ronald gets to sit there all day, enjoying the air conditioning looking all happy. 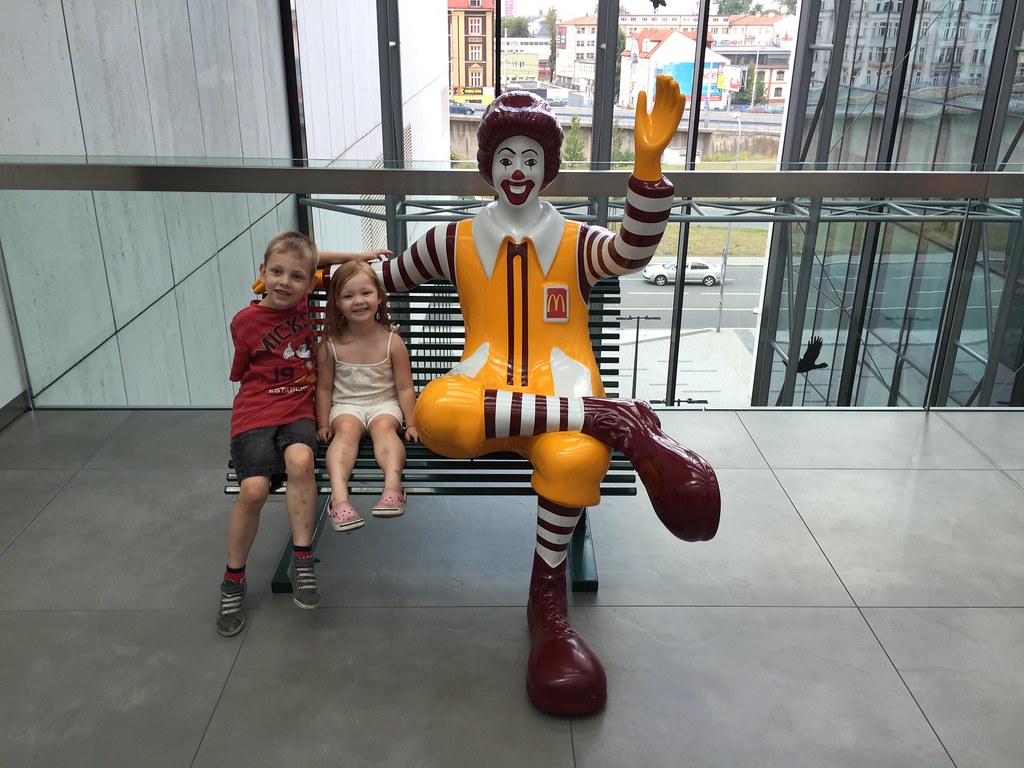 We’re trying to have a positive attitude, but it’s been rough. Right now I’m sweating, we have six fans running, and we’re sleeping in the living room because it’s just too hot in the bedroom. Every time I get hot I just go and take a cold shower which really does help. The weather is supposed to be like this for at least the next week so we’re buckling up for more heat. If you think of it, pray for us, especially our kids. It’s hard to sleep when you’re sweaty and hot and we’re all trying to just make it through until cooler air comes our way.