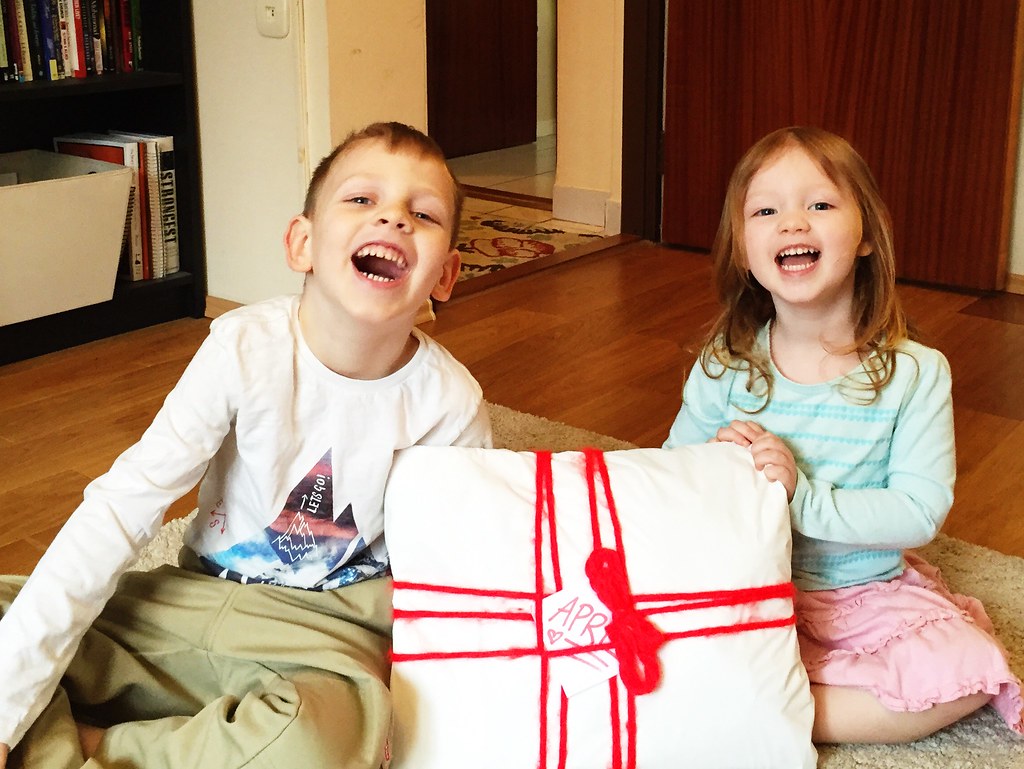 It has been on our agenda this week to open up the April envelope which is the second to last envelope we get to open. This one was signed by our friends the Millets and it was full of lots of fun things. As you can see in the photo above, the wrapping itself was something special and the kids loved trying to figure out how to get in to it. I took a lot of photos of the process today, so here’s the story in pictures (with captions beneath some photos). 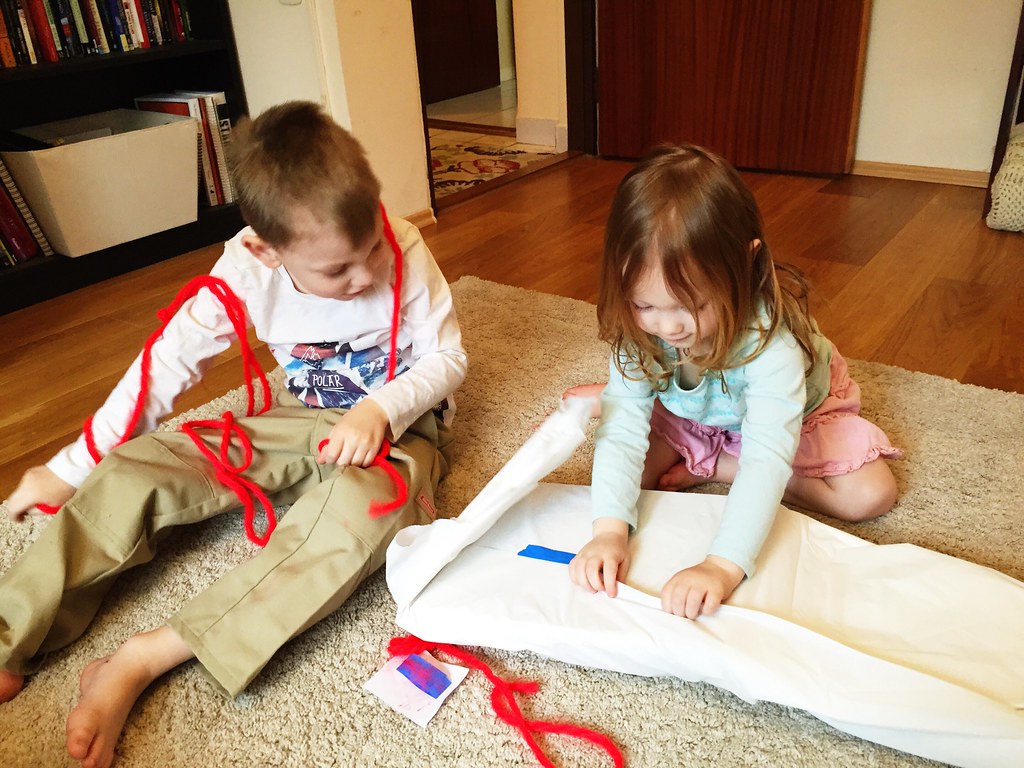 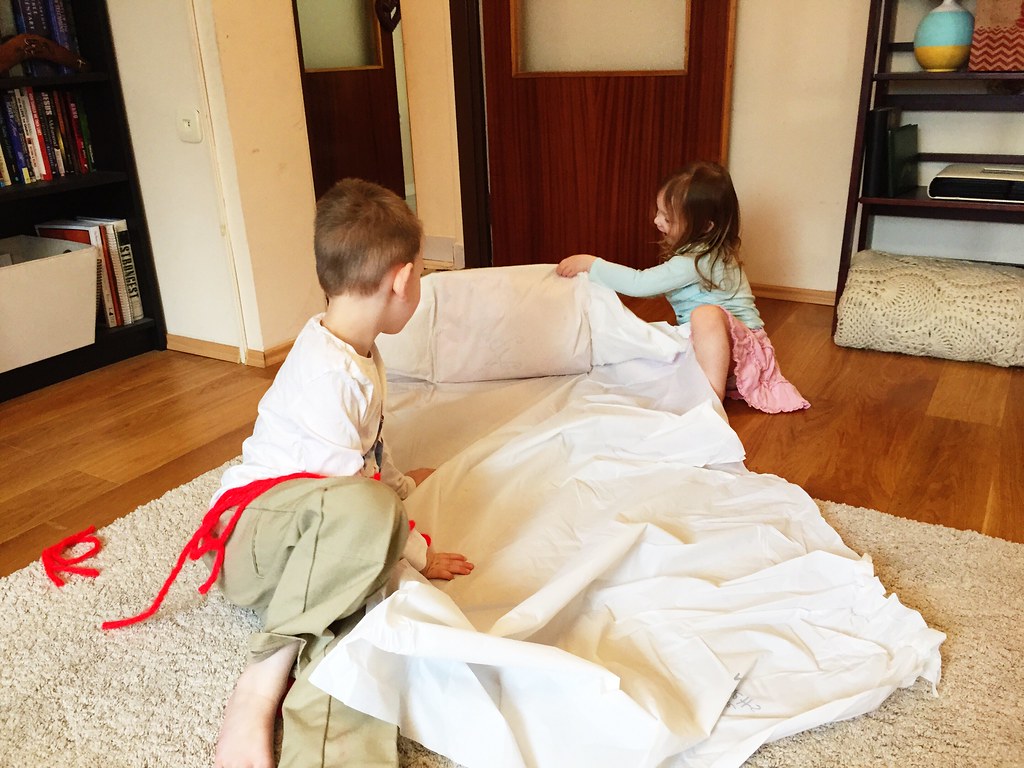 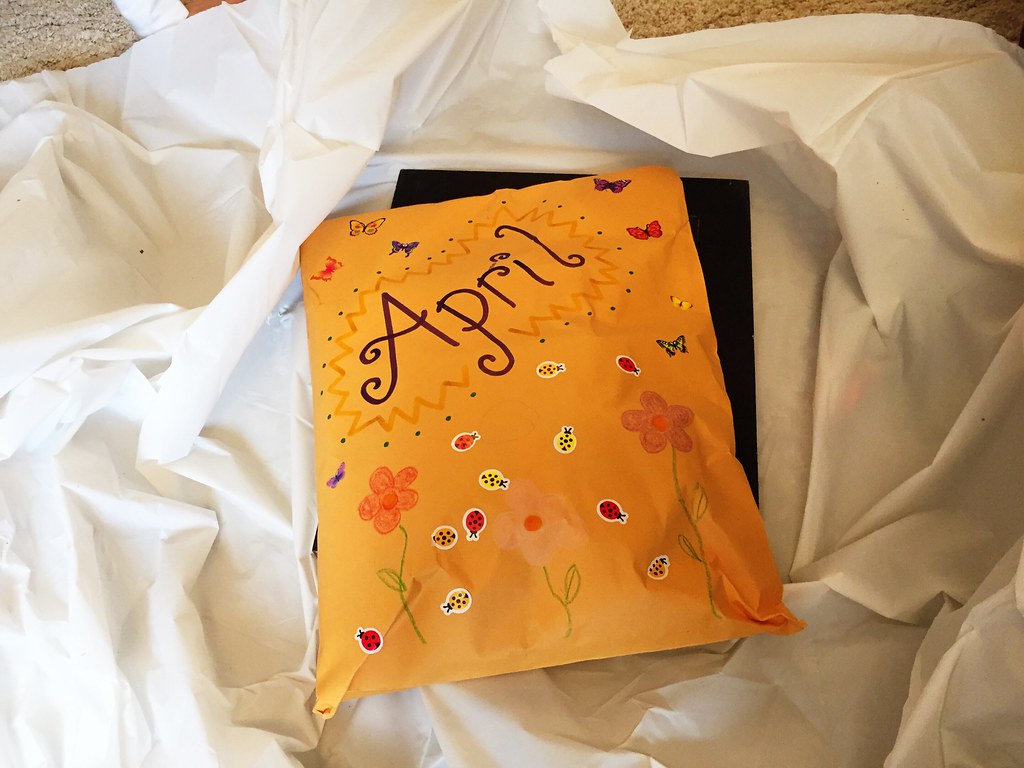 It took the kids a bit to unravel the string and the large white plastic table cloth that the envelope was wrapped in. 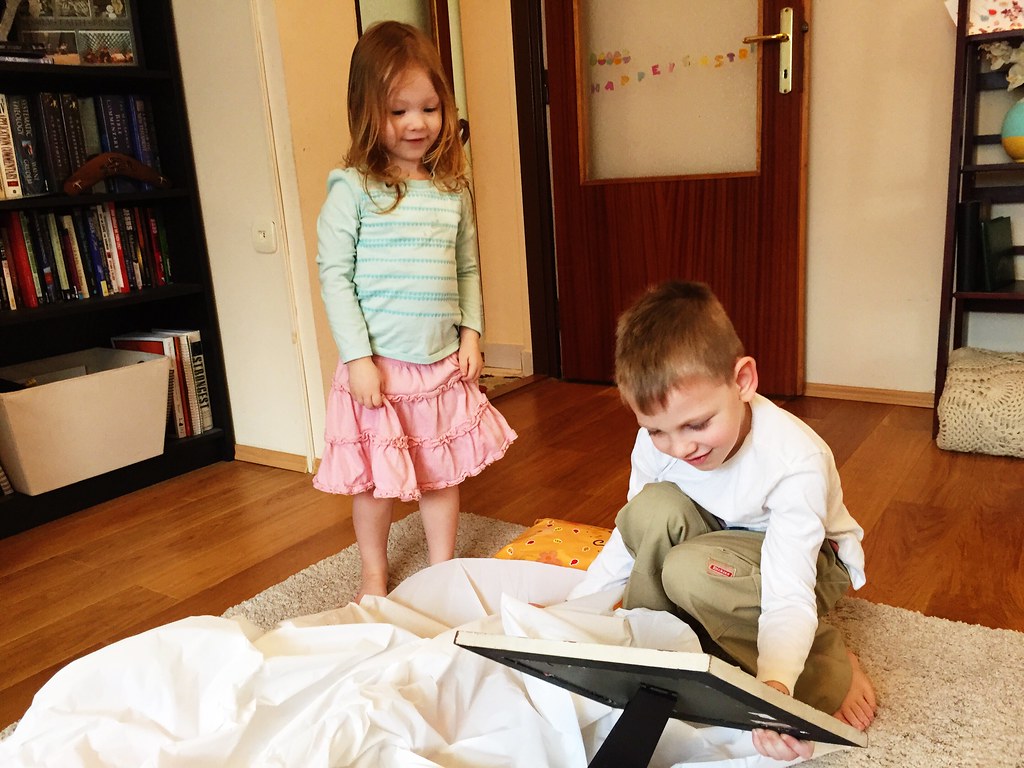 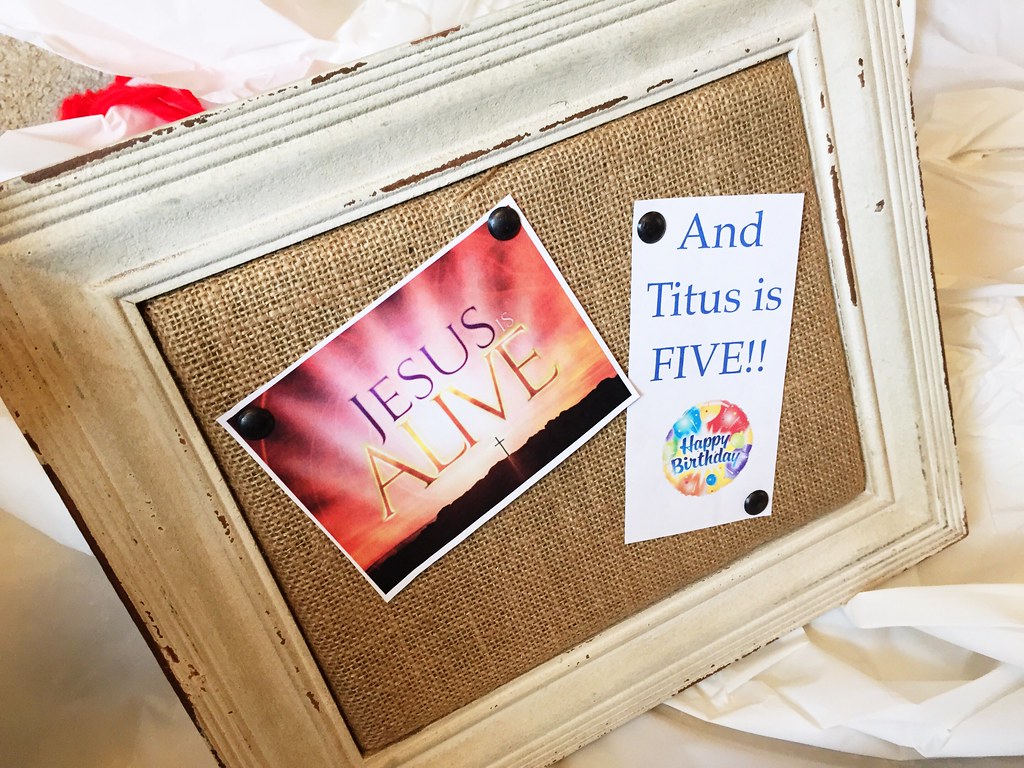 Alongside the envelope was a big frame celebrating both Titus’ birthday and our resurrected Savior (Titus’ birthday is on the 24th). It was really fun to open this on Easter weekend! 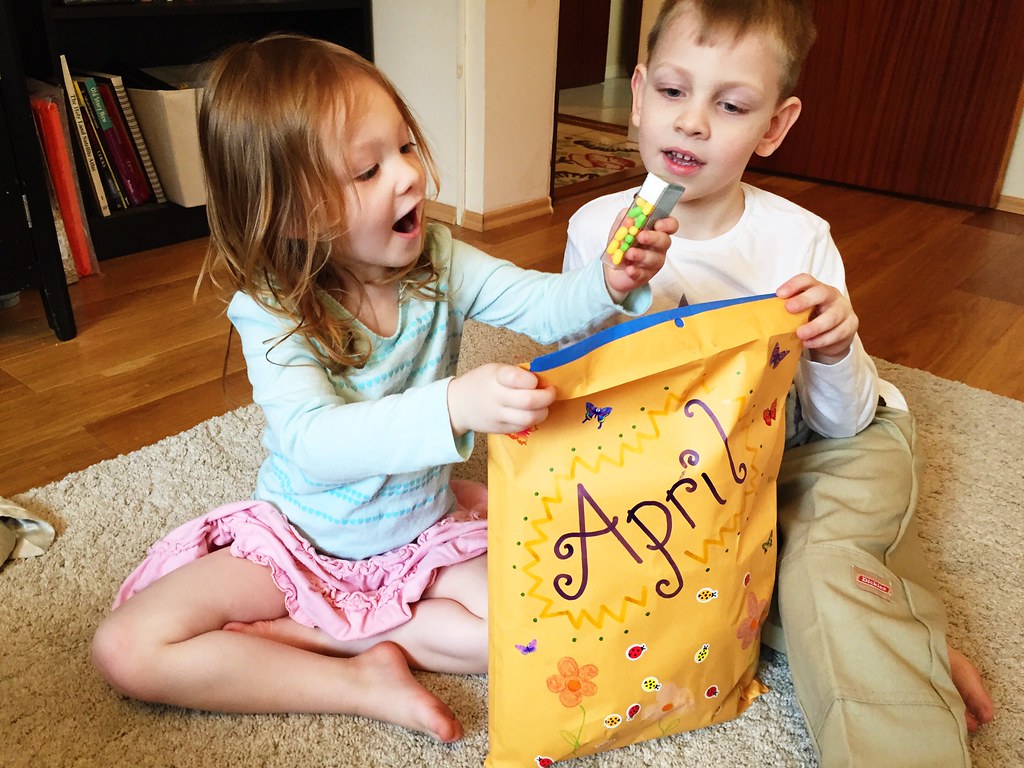 Avery was pretty excited to find some colorful Tic-Tacs at first grab in the bag. 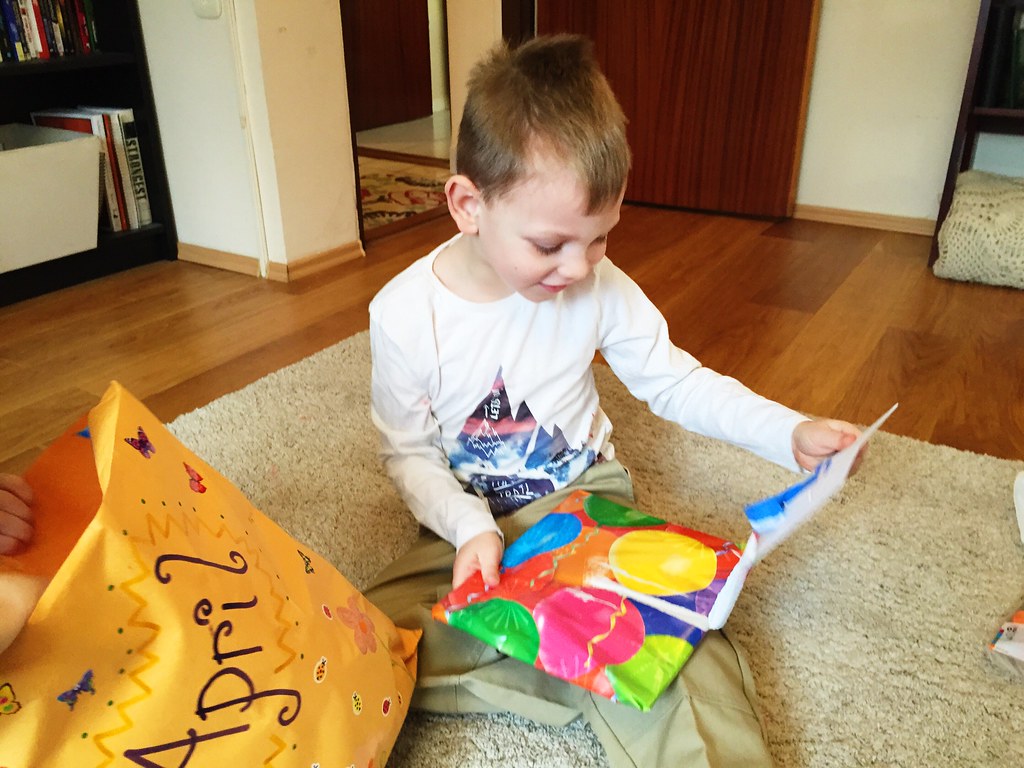 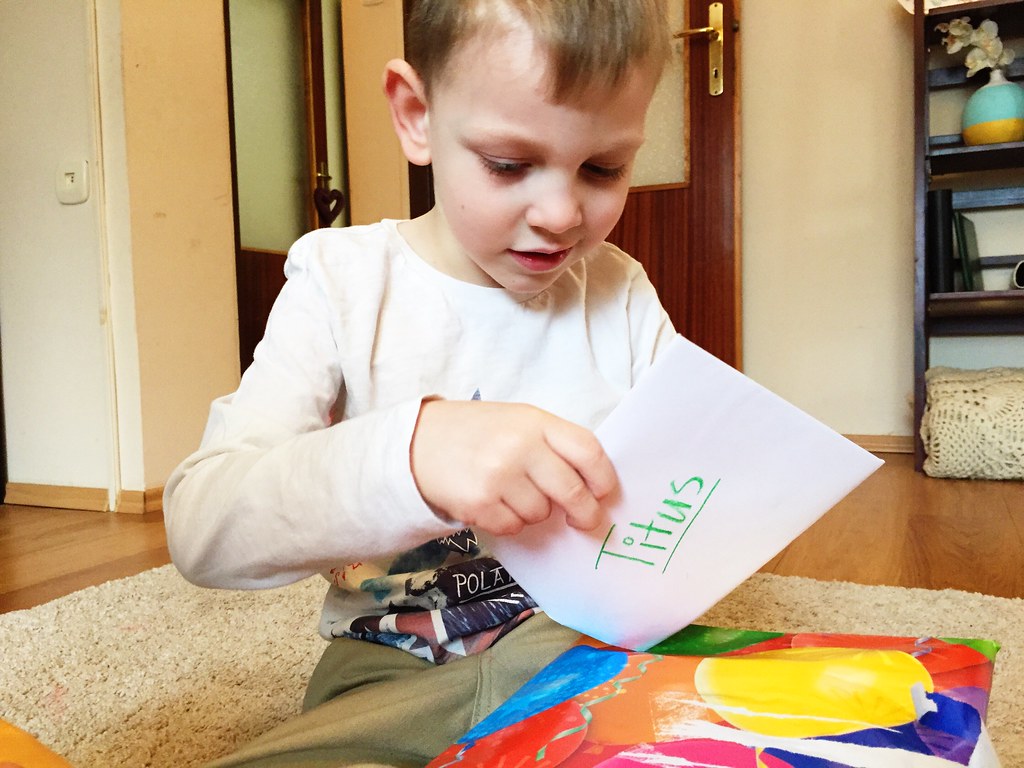 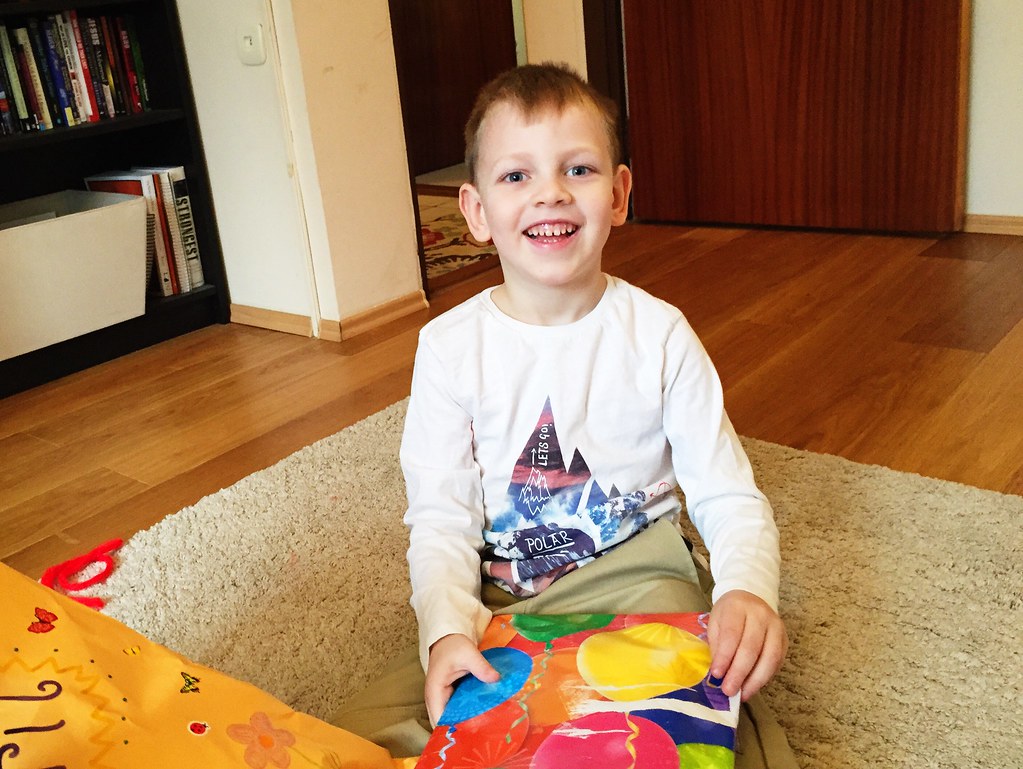 Titus found a present with his name on it and immediately got to work opening it. We were proud of him because he opened the card first and tried to read it, as well as asked if it was OK for him to open it even though it’s not his birthday. Since we were having so much fun, we though an early birthday present would be alright. 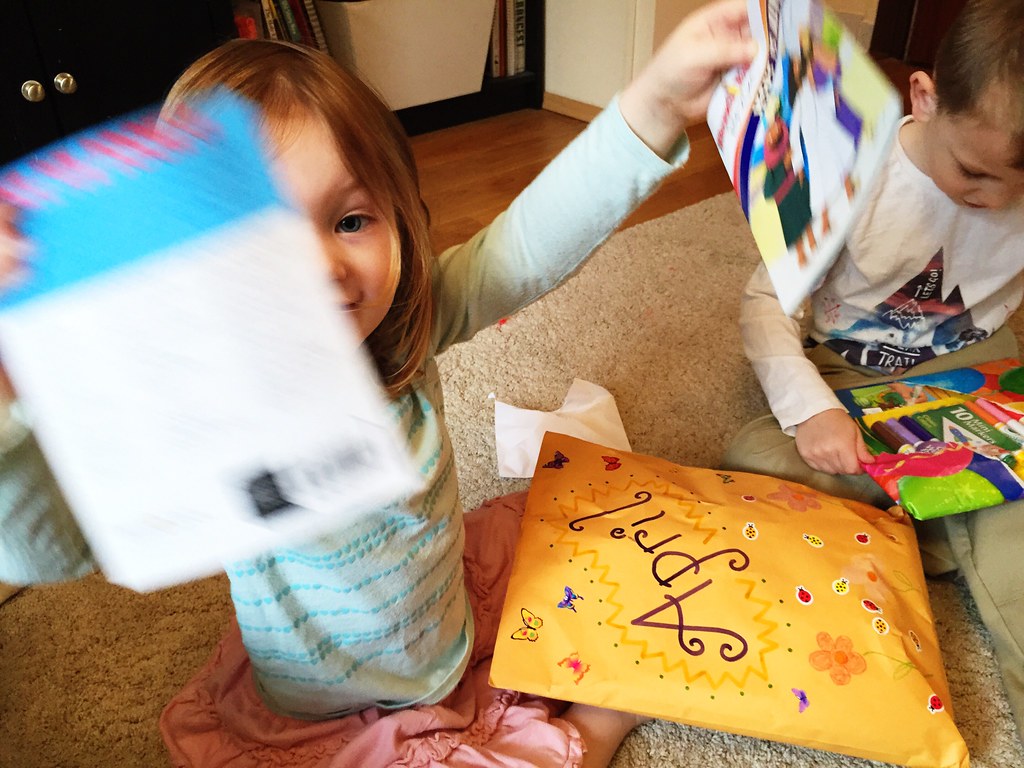 While Titus was opening his present, Avery was finding all kinds of things in the envelope. 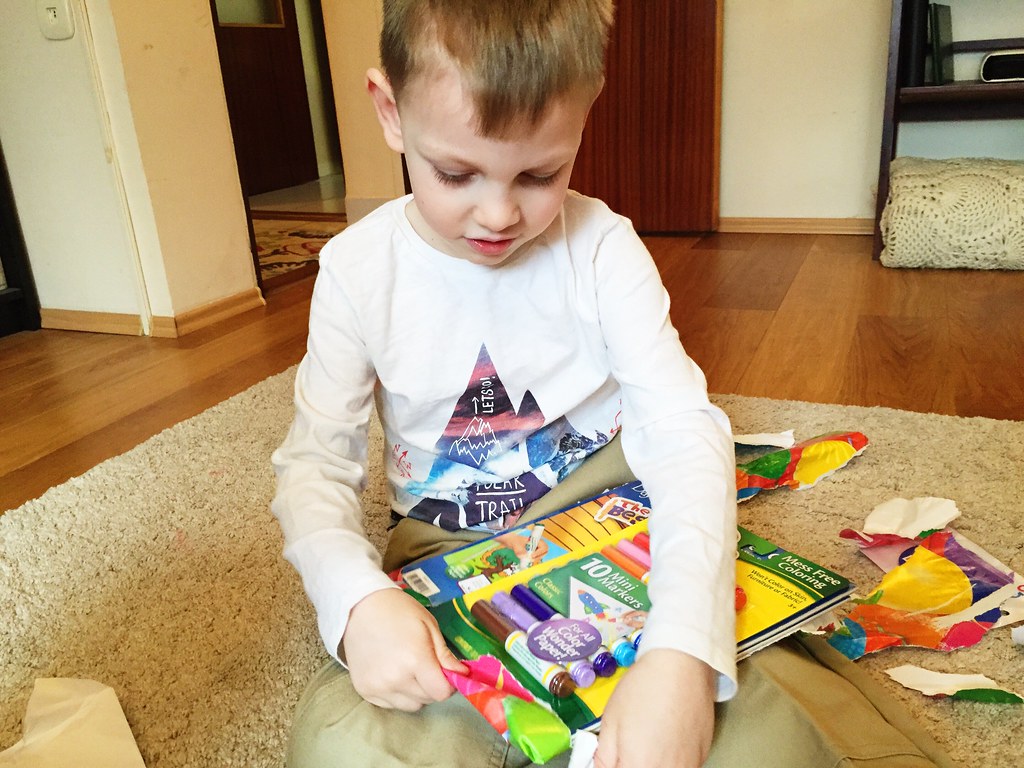 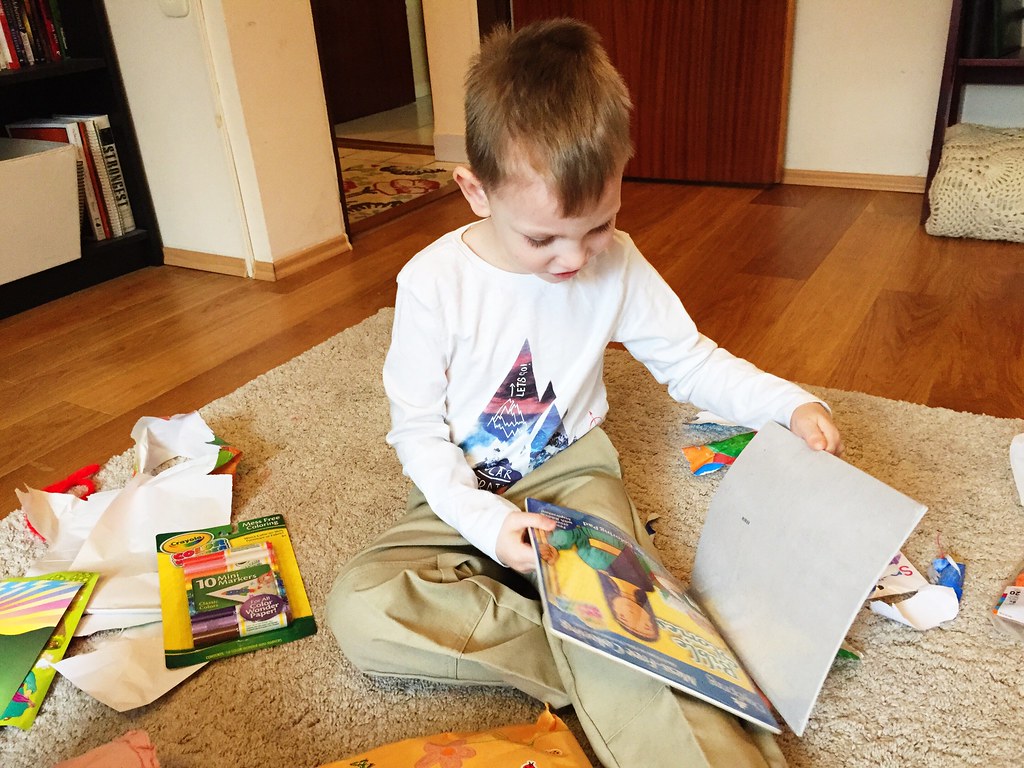 Insides Titus’ gift were special markers with Bible story books! We love these kinds of books because the markers are special for this kind of paper and usually don’t cause a big mess. Titus was definitely excited about this one. 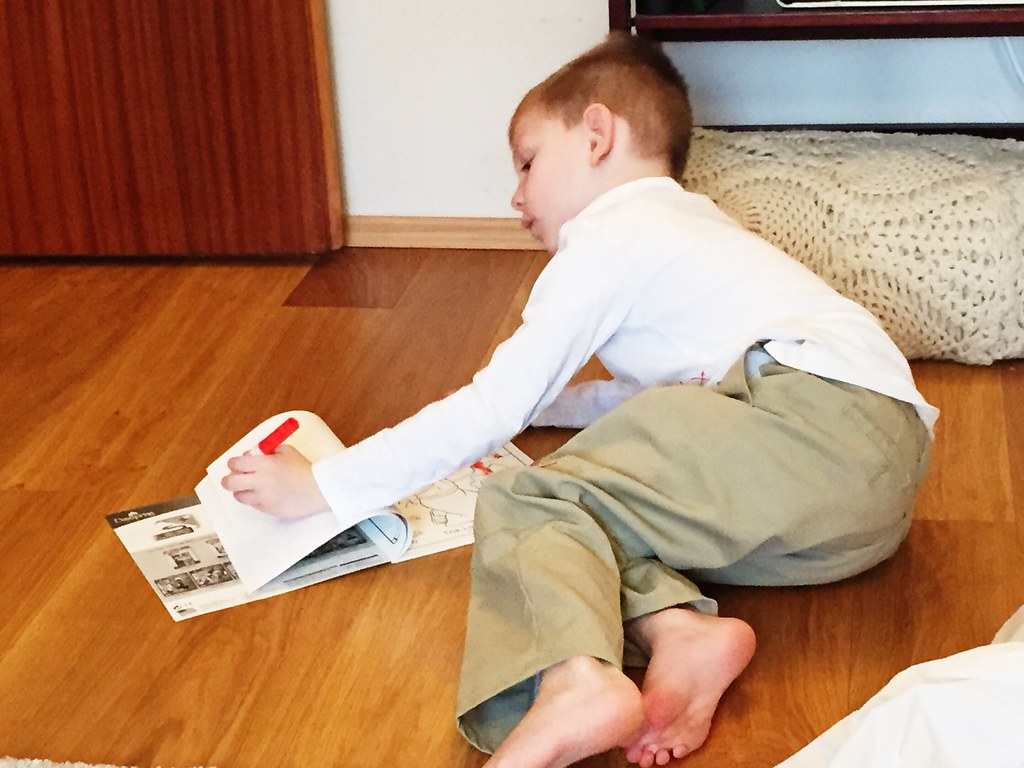 Titus got right to work coloring. I had been distracted by the other books that Avery had pulled out of the envelope and Bethany nudged me to take a photo of him coloring all by himself. He was very focused and as usual he picked the color red (his favorite color) to start with. 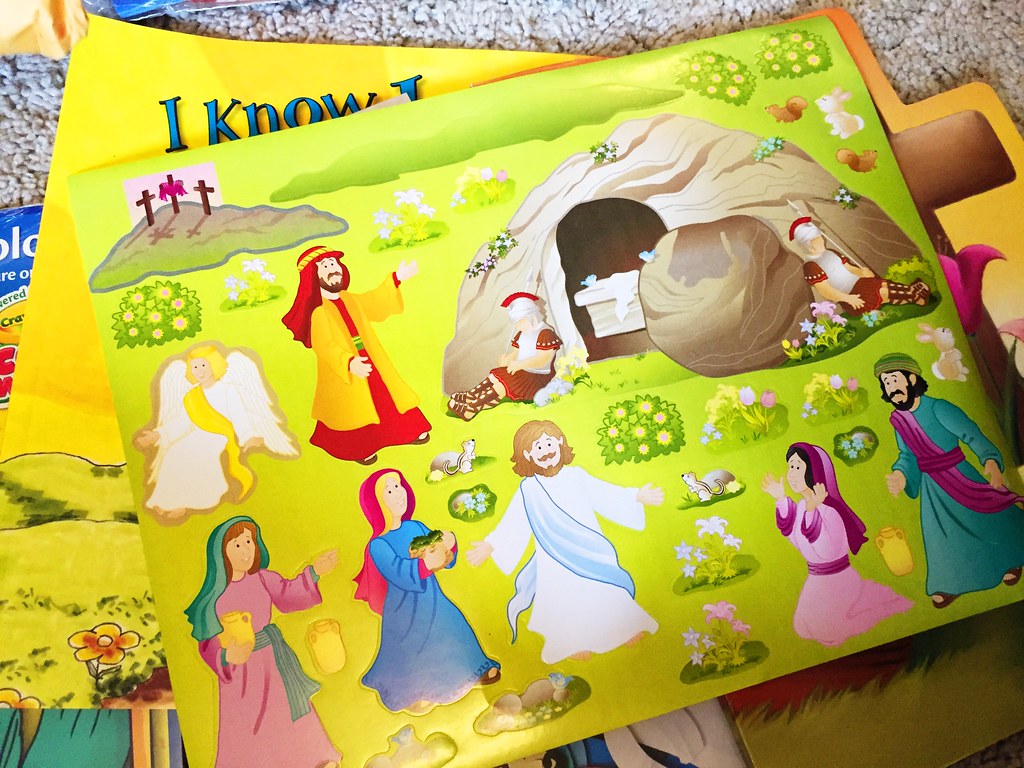 There were a ton of books and stickers inside, along with a sticker pack for the Passion week and Easter. The kids spent a lot of time working with their stickers and we had fun talking about Jesus and the tomb. We are so blessed to have friends from the States who were willing to sacrifice their time and resources to bless us like this. As always, thank you!

Beyond the envelope, the only other thing we did today was take the kids to the play place at the mall. This has become more of regular thing, but it made a lot of sense today because the weather was cold and mixed rain and snow. We talked about going to the zoo, but I’m glad we didn’t because it was just miserable outside most of the day. The kids had a fun time at the mall and we were able to do a little grocery shopping while we were out. Tomorrow we’ll have the Easter service at church and a bunch of missionaries are getting together for a pot-luck style meal in our town. Bethany is cutting veggies and prepping food as a type and I’m looking forward to celebrating the risen Lord tomorrow! 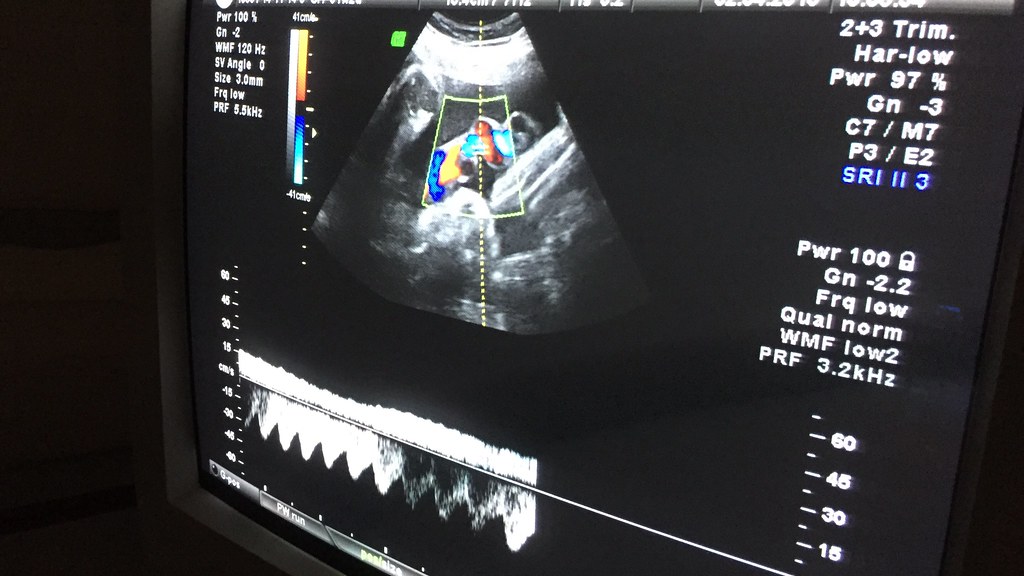 Today Bethany had a baby checkup and since there was going to be an ultrasound we decided to take the whole family. We got everyone out the door and to the doctor’s office on time, but when we arrived there were more people in the office than we really had ever seen before. Normally we get right in and out, but today it took about an hour before we got in to see the OBGYN. Once in, the doctor had lots of questions for us which were really good. I appreciate how thorough she is, even if it means things take a little longer.

Since the kids didn’t have much to play with at the office, and we had been there a while, they were getting a little restless so I was really glad when we all moved in to the ultrasound room. We had been telling the kids we would be seeing their baby sister today and they were excited to watch the screen as the doctor showed us the baby. At first, the baby had her hands in front of her face, but I think she moved and we got one really good photo of her. The technology of a 3D ultrasound never ceases to amaze me. Look at this face. 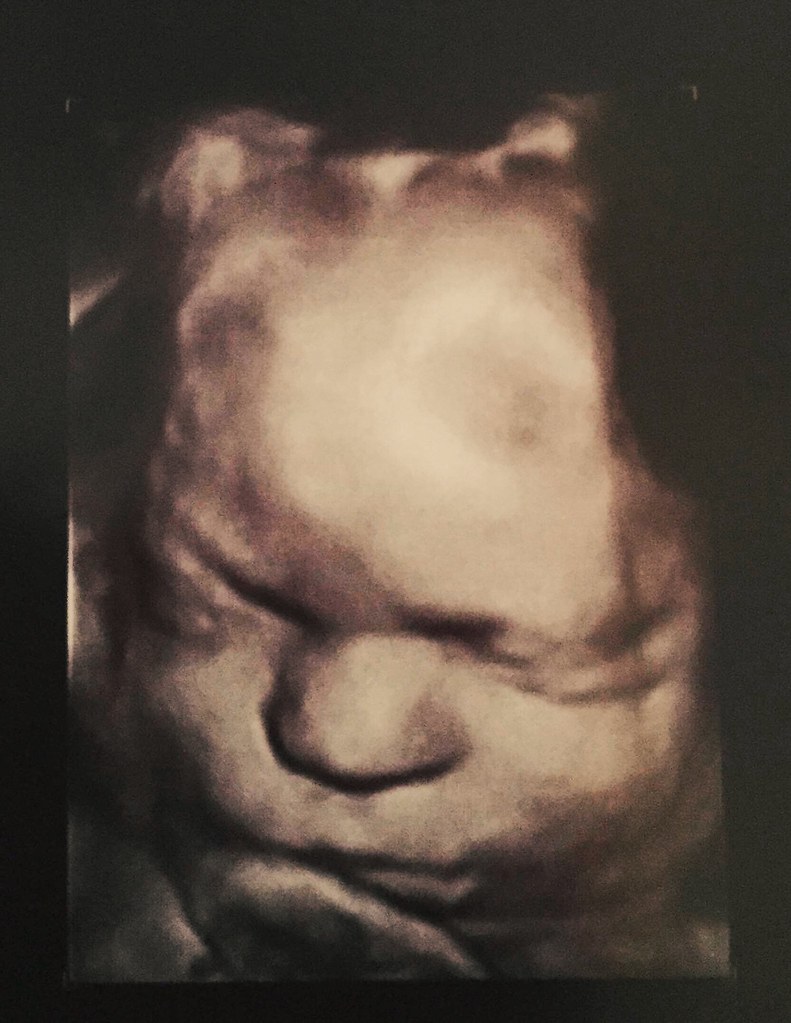 It was really cold this morning as we were walking in to the doctor. I think all four of us were surprised how cold it was and with the cloud over I thought, “What? Is it going to snow today?!” Titus even said to me as we walked across the parking lot, “Daddy, it’s really cold.” But nothing transpired…well, at least not until about 4pm today. I was in a meeting at the Josiah Venture office and got a picture sent to me from Bethany of snow falling hard at our house (shown below). I looked at the windows of my office and there wasn’t anything happening, but I could see the wind was blowing. About ten minutes later it began to snow and another missionary walked in to my office and we stared out the window in shock. I had to remind myself it was April 2!

And here’s some video Bethany got.

Snow in April from Shay on Vimeo.

I finished up my meeting (which was over video chat), packed up my computer and headed outside. When I got to the car it already had at least a half inch of snow or more piling up on it. Here’s a photo of the car and then me clearing off the window shield in the second one. 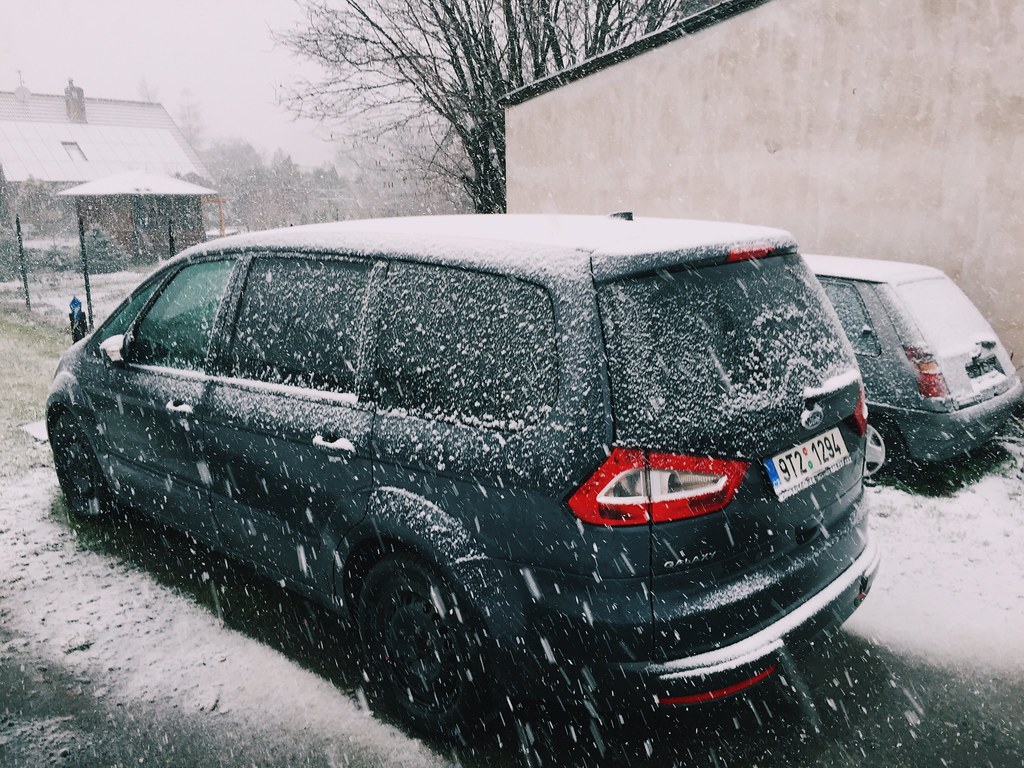 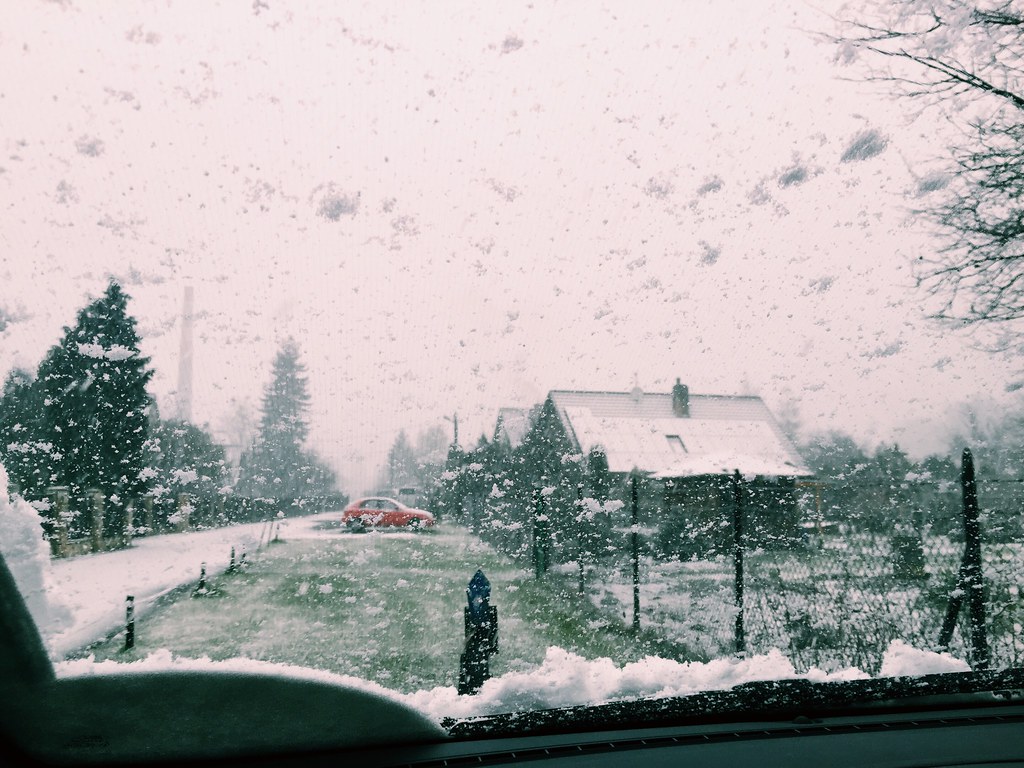 Driving away, I couldn’t believe how much was coming down and that it was sticking so well. I called Bethany from the car and we were just laughing about it. She wanted to make sure I would be safe and as I got on to the highway things looked good, but it was pretty slushy. I made it home safe and the snow let up a little as I came into our town. As I pulled in to the drive way the kids met me from the kitchen window and were really excited. I couldn’t help but a get a photo of their little faces too. 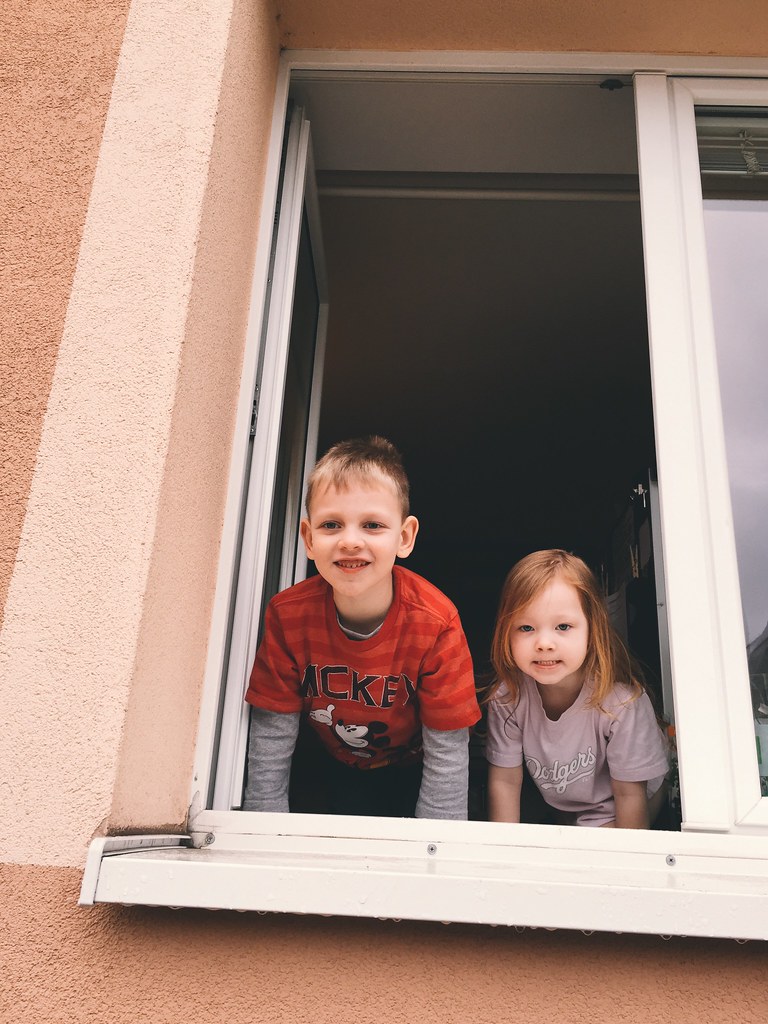 The kids and I ended up playing out in the snow for a bit while Bethany made dinner. It was just crazy to see the new planted flowers in our landlord’s garden covered in snow. As well, the church next door has trees lining the property that we can see over our wall. It was as if we had jumped back to Christmas with all the snow. Here’s a few more photos of the flowers and trees. 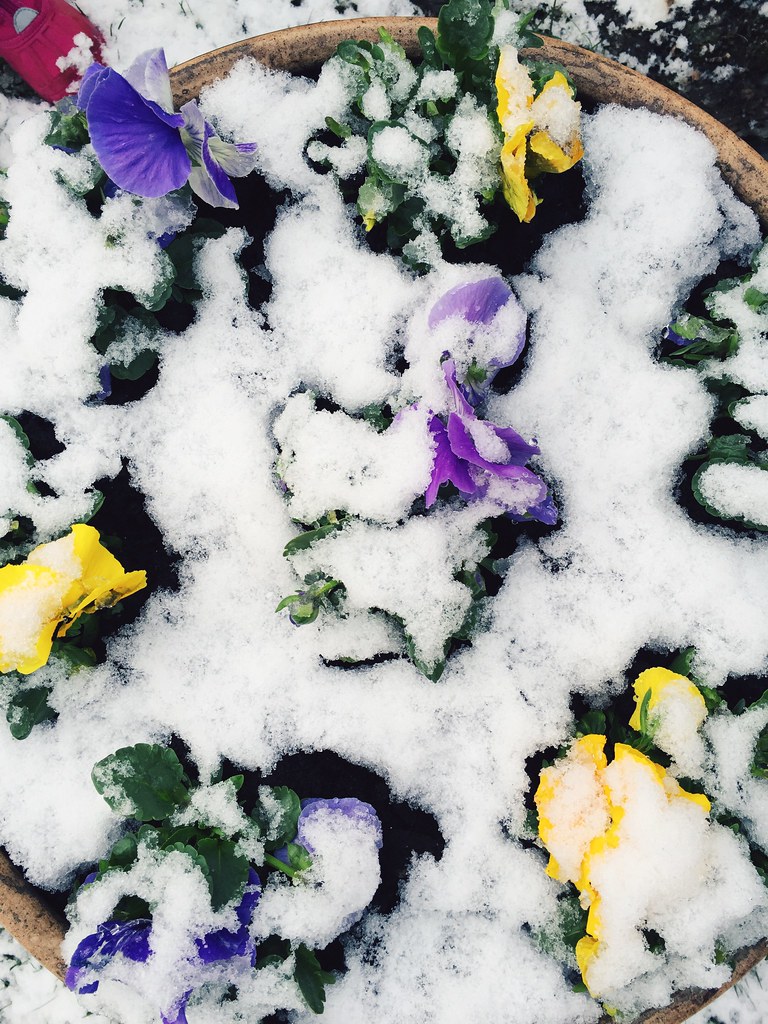 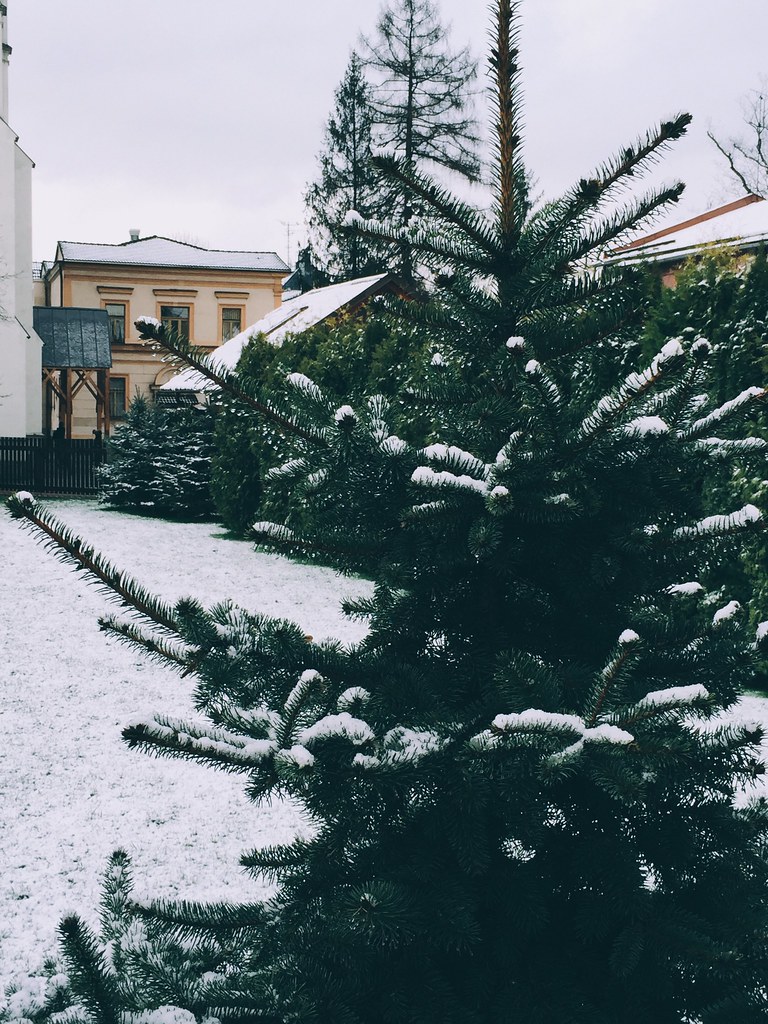 No, it’s not Christmas, it’s just Czech Republic. I checked the weather and it’s supposed to snow late tonight and in to tomorrow morning. I have a meeting at Josiah Venture early so I’m hoping things won’t be too bad. Our jaws are still on the ground. April in California is when you hit the beach and work on your sun tan, but in Czech you get out your snow gloves and make sure there’s enough fire wood!